Though not officially, it seems that McCall's and its Vogue pattern division has had a little crush on Carven designer Guillaume Henry. First, there was this delicious little dress from the Spring 2013 Ready To Wear collection that showed up in its books as Vogue 8900: 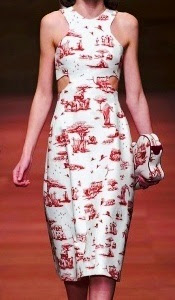 The style lines were on-point, including those curvilinear princess seams in the skirt. Unfortunately, not enough sewists purchased the pattern Vogue provided and it is already OOP. However, the Internet is our friend and you can still locate it if you wish. Just imagine it in the fabrics used in the collection; a textured raffia linen and a great Toile de Jouy print. However, don't let the cut-outs intimidate you (which I think was the reason for the pattern's unpopularity), version A has them inset with fabric for a little trompe l'oiel action.


Now, it seems Vogue has interpreted a dress detail from both the Carven Fall 2012 RTW and Louis Vuitton Pre-Fall 2012 RTW collections. Edit: Also the 2012 Pre-Fall Jonathan Saunders collection. How did I not notice until now that these were all in the same season? Anyway, this lovely bodice design incorporated a dart structure I remember first seeing on patterns from the 1950-60s. 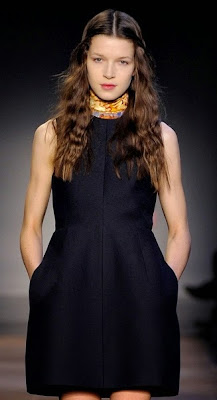 Edit:
It has become Vogue 9020, a separates pattern that again may not make a lot of fans due to it's exceedingly dull envelope illustration.

Instead, consider how Carven's 2012 Fall RTW collection shows this front dart on a variety of dresses in different silhouettes with varied skirt designs and in multiple types of fabrics, including velvet and laser-cut lace. 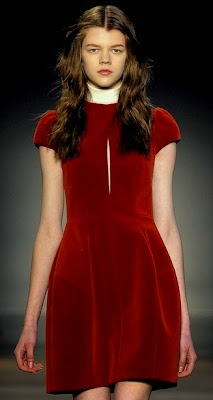 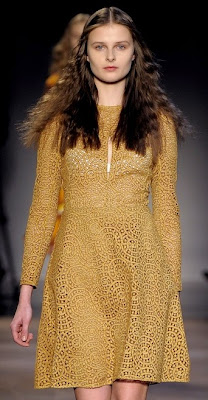 Believe it or not, but both dresses above are based on the same bodice design, only with the center seam open for a few inches vertically. Imagine the vertical area between the two horizontal darts in Vogue 9020 as a large bound buttonhole, perhaps.

Oh, what a versatile pattern, right?
Written by lsaspacey at Monday, September 08, 2014

My, you have an excellent eye for detail!

Thanks for the insight! Amazing the difference the pattern picture makes to how you see a design.