I think I want this What I am working on right now... The answer was easy.

If I had to think it over, then I don't really want to deal with that person or that situation again.

So, that friendship request was denied.
Written by lsaspacey at Thursday, June 21, 2007 No comments:

The boy from Florida

I have few friends in Richmond this time around. Most of my friends live in other states (Louisiana, New York, Florida, and California) or countries (Italy). The closest distance to one of them...eight hours by car!

Well, Friday afternoon I received a call from the friend in Florida. He had flown up for business in D.C. and wanted to know if I wanted to go to a movie that night. I said yes, automatically knowing what that meant; he was going to drive down to Richmond to see me. This was exactly what I needed to hear.

The last few weeks I had been thinking about the role and importance of friends in ones life. Then last week, having been contacted by people from the past made me think about the quality of those friendships and their effect on how you think about yourself. Late last year, I had to walk away from a very problematic long-term friendship that was effecting how I viewed myself and acted toward others. I'm still a bit wary to put myself back out there.

It's great to have tried and true people in your life. And Florida friend is one of them. The last few years, we have both made some major changes in our lives, switching the direction of the paths we were following. We are making sacrifices (social lives), taking on debt (lots), and constantly looking for clues that we are on the right path. Our conversations are always full of mutual words of support and encouragement. If I immediately pooh-pooh an idea that I had or say that I can't do something, he always says "Why not?" His belief in me is a welcome change from what I was hearing from others before last fall. We all need someone in our corner.

He always amazes me with his lust for life and the fact that he is a hard worker who knows not to skimp on a good time. I have every belief that he will reach any goal that he attempts. In fact, I was surer of his passing the Florida Bar on his first try than he was!

We ended up driving around the city, eating good food, doing things, and going places that I never experienced in all my years in this city. It was great.

A few years ago, I moved back to Richmond from Northern VA. I initially signed myself up on Myspace.com in order to keep up on a favorite local band. This was before I even knew it was a big thing with preteens and teenagers.

I put my picture up and some information about myself. Well, that was like beaming a neon WELCOME sign to all freaks. I had to log in, check out, and deny so many friend requests, it was crazy. I eventually replaced my picture with some clip art and deleted all the personal information from my site.

Unfortunately, someone was still able to track me down. Now people from my first round of living here are contacting me on a daily basis. These are the same people I have not heard from in 9 to 17 years! We parted company with no pretense about keeping in touch. So now they all seem to care how I am. My belief is that they just want to find out if I gained weight or look older than they do.

It's funny how time also makes some people forget that their past behavior towards you was so bad that they probably should not try to contact you as if nothing had happened. However, I still got that e-mail today. It is from someone whose last communication with me consisted of them hearing my voice on the phone and hanging up on me*. Now 9 years later, they want to be one of my "friends" on Myspace?!!

Right now, I don't know what I will do about this e-mail. I'm going to take a few days to think about it for a while.

*Just so you know; they were clearly in the wrong and I was calling to give them the chance to explain. They tried to take advantage of a very vulnerable situation with no compassion or respect for the two people involved. Last fall, I ordered my dream desk. Little did I know that it would take almost six months to get here. The goal was to help me complete my work for the fall semester at a desk that didn't cause me back pain and limit my computer sessions to whenever I couldn't bear the pain any longer.

Well, here it is just in time to work magic on the summer semester. Cross your fingers.
Written by lsaspacey at Sunday, June 10, 2007 No comments:

Just in time, I picked up another class!

For the summer semester, I originally signed up for Survey of European History 101, which would have started May 21. The spring semester had just ended the week before and I began to realize I would not be mentally prepared for it, so I dropped the class. The same class, offered in June was filled so instead I signed up for the second semester, 102, which will start later in the summer.

A few days ago, I noticed an Art History class I had passed over originally because of a time conflict. This class would fulfill my Non-Western art requirement and because I had switched that history class I was now able to take it. Therefore, at the end of the summer I will one class completed in both Art History and History, the only two subjects where I still have classes to take.

I'm so glad I checked too, because this new class starts this Monday!
Written by lsaspacey at Wednesday, June 06, 2007 No comments: Written by lsaspacey at Saturday, June 02, 2007 No comments: 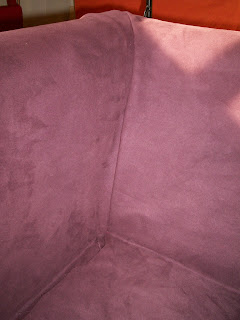 Here is a corner of the slipcover after it was basted and turned right side out. 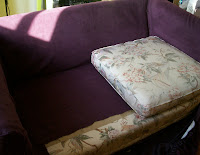 \
This is how it works. Cushions are placed on top of the fabric that used to be tucked behind it.

The elasticized fabric portion is pulled up, over, and around the cushions.

Minimal tucking is required for it to look like this now.

Note: Even though it looks separate the slip cover is still one big piece, all sections are still attached to each other. 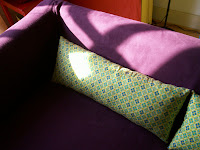 Bolster pillows are now in place, adding style and color. 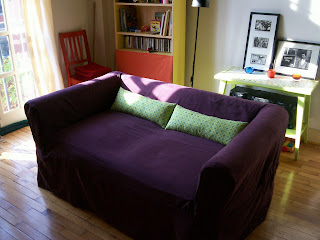 The love seat made over and my inspiration photos.
Written by lsaspacey at Saturday, June 02, 2007 No comments: