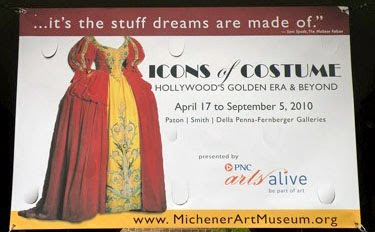 On September 4, 2010, I attended the “Icons Of Costume: Hollywood’s Golden Era” exhibit at the James A. Michener Art Museum in Doylestown, PA. I had never been there before. Luckily, when I decided I wanted to see this exhibit, I noticed that Doylestown was very near the childhood home of my freshman college roommate and still close friend, SKB. She (and her mop-topped 3-year old son) drove 5 hours South to see me and I drove the same distance North to see her.


This was the blurb for the show:
"This exhibit features the fashions and accessories worn by luminous film stars such as Elizabeth Taylor, Errol Flynn, Audrey Hepburn, Warren Beatty, Barbara Stanwyck, Gene Kelly, Loretta Young, Arnold Schwarzenegger and many others. More than 50 costumes and objects present the still-influential designs of celebrated fashion designers, from the 1940s through the 1990s, including Edith Head, Adrian, Walter Plunkett, Orry-Kelly, Bob Mackie and others of legendary renown. Drawn, in part, from numerous films that were nominated for an Academy Award for Best Costume, six of them took the Oscar home"


The show was composed of items from the private collection of John Lebold.

Unfortunately, that blurb was the only information we received on the show. Besides the gallery cards on the exhibit bases there was no detailed brochure or catalog for the show. I had to rely on written notes and sketches that I made on the back of various fliers from the museum. Therefore, many outfits pictured here, I no longer remember who wore them or in what movie. So very disappointing. By the way, photographs were not allowed and many of these were from the local papers.** 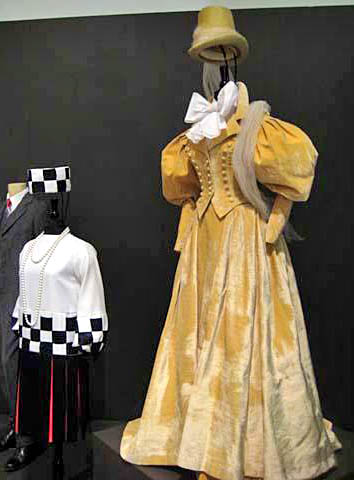 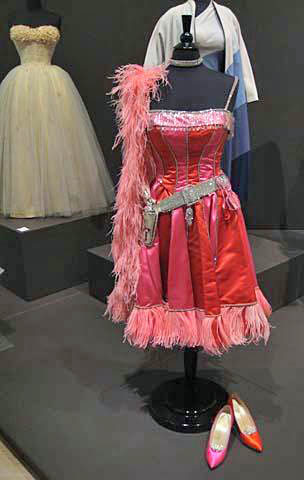 Below are costumes for Elizabeth Taylor in A Place In the Sun (Edith Head), Audrey Meadows in an episode of The Honeymooners - yes, a black & white TV show! (Peggy Morrison) and Ginger Rogers in Black Widow (Travilla) in the back 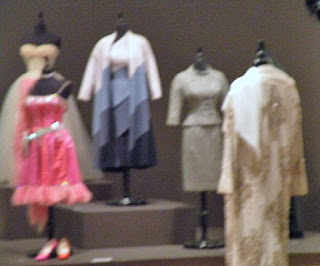 Though blurry, I had to show you a picture of the color blocking on the Travilla suit for Black Widow, which is hidden in the previous picture. This was one of my favorite pieces. In multiple shades of blue, grey, and beige, the dress design seemed to spiral around the body as well as the matching coat. Note how the diagonal neckline of the one-shoulder dress underneath matches the diagonal lines of the ensemble. Travilla was also represented in the show by a replica of this dress. 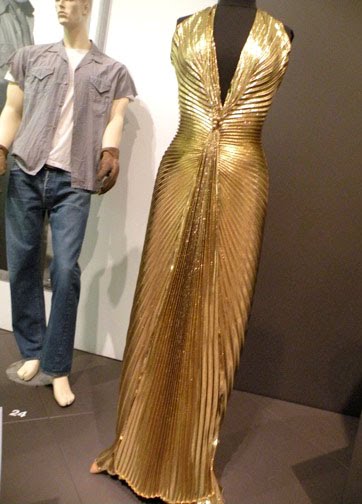 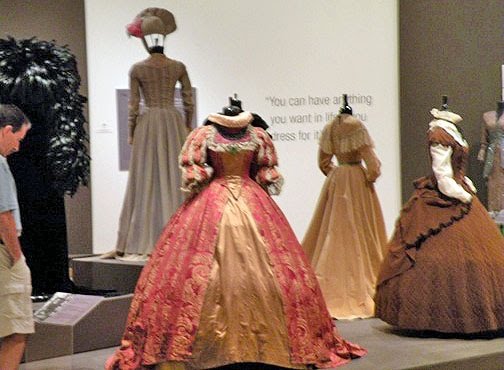 
The Bette Davis costume seen above by Orry Kelly revealed that the actress had a 21-inch waist! We could swear it looked even smaller! Another Orry Kelly ensemble with an enviable waist was Betty Grable's lovely hobble skirt worn in Mother Wore Tights. Unfortunately, I couldn't find a picture of this outfit from the film. 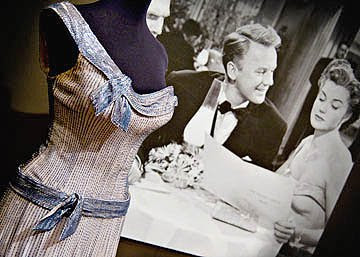 
It was surprising how small some of the actress' were compared to their screen images. The Helen Rose-designed dress above from Duchess of Idaho showed that Esther Williams, although broad-shouldered and athletic, still fit into this crowd of tiny dresses just fine. Arnold Schwarzenegger's costume from Terminator 2: Judgement Day wasn't as tall or massive as I had expected. The most impressive costume in terms of size and presence was the one worn by Samantha Eggar in Doctor Dolittle (Ray Aghayan). I can just imagine how much that buttercup yellow velvet ensemble with massive, puffed sleeves must weigh.


Rita Hayworth's Gilda dress by Jean Louis was such a tiny, tiny thing! When we saw it up close we realized that Rita didn't have the typical hour-glass thing going on, but the dress deceptively gave that impression because of the draping at the bust and the side hip flounce. 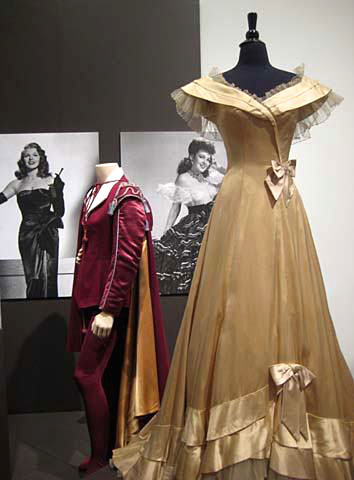 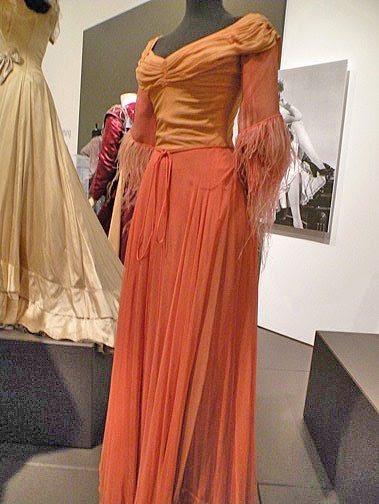 I regret that I didn't get a picture of one dress, a Travis Banton gown worn by Tallulah Bankhead in Devil and the Deep (1932) It caught my eye because of its intricate embellishments of bugle beads and sequins, its delicate matching wrap, and its pale apricot color. Banton was also represented in the show by a stunning gown worn by Marlene Dietrich in Shanghai Express. You would be amazed to see that the black feathers that adorn the gown reflect hints of blue, purple and green. Gorgeous to behold in real life, a pity that the film was released in black and white.

SKB was impressed by a Carol Burnett gown by Bob Mackie. The cream dress was simple in silhouette, a column dress littered with bugle beads in a slightly different shade. The remarkable bit was how the beads were arranged. On the dress; divided into horizontal quadrants, the beads would be lightly scattered in one section, in stiff diagonal rows on another, and massed in a third, giving the dress texture and interest, along with a fluid, shimmering presence.

The one male costume I couldn't photograph nor find an image of online was the most striking costume in the exhibit in terms of its vibrant and highly saturated color combination. It was made by Olga Lehmann and worn by Richard Chamberlain in the 1977 version of Man in the Iron Mask. In style, the frock coat was in a cranberry brocade with the long vest and breeches in a purple shantung that flashed red at certain angles.

We both thoroughly enjoyed the exhibit and loved the museum; however, the exhibit should have prepared some additional background on these gems of cinematic history, besides just who made them. There were some amazing techniques in that room that I would have loved to research and most of the beading patterns were amazing to view. Despite this, I will always remember this trip, not only for the clothes but also for the time I was able to spend with an old and very dear friend. Thanks SKB and little B!

Articles about the exhibit: 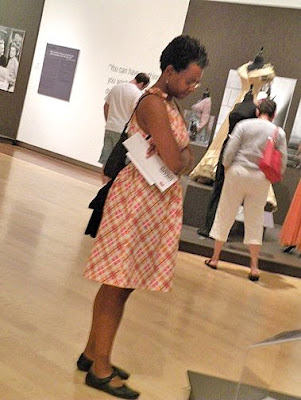 Proof that I was there!

*However, we had taken quite a few before we knew that! ; ) Pictures that we took are marked with an asterisk (*).

I like the golden yellow one with the tailored looking top. Is that the The Emperor Waltz one?

If you mean the one next to the orange dress, yes. I wish I could remember what that orange/coral dress was from, it was the whole reason for that photo. Alas, Sandy took it so I didn't make notes from the lobby card.

At the time when Rita Hayworth's Gilda dress was made, she was quite pregnant. But the dress was designed to hide it. That would explain the roundness in this particular dress.
Angela

Oh my goodness! This is just magnificent! And it's too bad that they didn't give out a more detailed brochure along with the exhibit. You would think that if one took the time and effort to organize such an event, that they would also put together a more informative resource for the viewers...

The actresses back then were so so tiny! But they didn't look particularly gaunt on screen so I think many of them were just smaller boned...it's kind of amazing how much human bone structure has changed over the past handful of decades.

And Bette Davis, oh my! She's definitely one of my top five favorite actresses of all time. :)

Yes, they were definitely smaller. We were shocked how short most of the mannequins were to fit the dresses. The average height seemed to be about 5'4".

So nice to see these photos of the exhibition.

The mystery orange one with the feathers is Ann Miller from "Easter Parade" MGM 1948.

I am a costume collector so love this stuff!

Anon,
Thank you soooo much for that dress credit. It's so lovely and no surprise it was worn by Ann Miller. Love her!