Battle of the Bulge

WOW, I really didn't mean to disappear for so long! It was a combination of illness and procrastination. I also had a few mending projects to do for a friend, and then made a spectacularly failed UFO.  In fact, that UFO revealed a problem that I apparently had been ignoring for quite a while.

A few months ago, I had to buy a new pair of work pants because I had outgrown the first ones. The thighs were straining and the stitches were about to give up! I also, for the first time experienced my thighs rubbing together when wearing my summer skirts. I was SO not happy.

Since I moved here two years ago, apparently I have gained a large amount of weight and didn't really notice. To put it the only way I can at the moment, I found out that I am now 11 and a half stone. A stone, a unit of weight measure in Britain, Ireland, and Australia; is equivalent to 14 American pounds. It's just easier for me to say it in stones. This is 15 lbs more than when I was weighed 2 years ago. 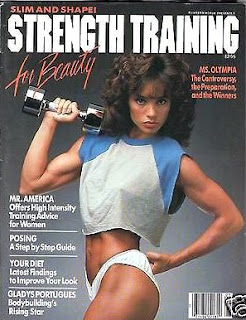 I was a very thin child in my teens and always susceptible to anemia. In high school, I hated being skinny and in particular did not like my arms. Around that time, I became aware of female bodybuilders like Rachel McLish, Carla Dunlap, Cory Everson, and Gladys Portugues through the 1985 documentary Pumping Iron II: The Women and that resulted in a subscription to Strength Training for Beauty (1984-86) magazine. I ended up purchasing an 110 pound weight set and remember arriving at college with what could be called a decent "six pack."

More than 20 years later, I am now battling a tummy and love handles, along with the aforementioned rubbed thighs and some unattractive underarm flab. There was a warning sign last May when I tried on this muslin and saw this: 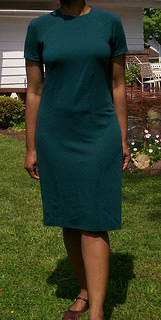 I noticed I was bustier than I had ever been and had a visible roll of blubber right below my belly button. That was a year ago and obviously I have gained more weight since then. As a result, my body image is completely different than it has been for the past 95% of my life. This is hard to reconcile.

My measurements have obviously changed but in cutting out my last sewing project, Simplicity 6145, I hadn't grasped that fact yet. While I altered the bodice of Simplicity 6145, combining it with the fit of the Grainline Scout, I still thought I would need to engage some darts in the back to accommodate my swayback. Trying on the basted muslin was such a shock! I could barely shimmy it on. I had not once thought of enlarging the waist area and below.

So for the last few weeks, I have put off sewing and more importantly taking new measurements for the future. I have succeeded in losing 5 pounds somehow and would love to know that I could remove the other ten just as stealthily but alas diet and exercise must rear their heads for that to happen. I seriously could handle getting used to this "new me" however, I have a wardrobe of delicious clothing that I can't afford to replicate or that have adequate seam allowances for me to alter to fit.

So my dilemma is: sew new clothes in the new size or wait and see? What would you do?
Written by lsaspacey at Saturday, September 26, 2015 12 comments:

Where Joan Holloway-Harris Laid Her Head

The last ever season of Mad Men has aired. While looking at all the retrospective articles, episode recaps, and fashion commentary, I also saw more pictures of the show's sets. With Joan Holloway-Harris' departure from McCann Erickson, a lot more of her scenes were staged in her little pink apartment. Even though most of the articles mentioned above spoke about how the characters had or had not changed in the last 10 years, one thing that did not change was her home. When I first put together this post, Joan was still a newlywed. Now, despite all her life changes in the past ten years and the fact that now her little boy and mother share the space, it miraculously looks the same. Check out some new pics and updated commentary (in blue) below. 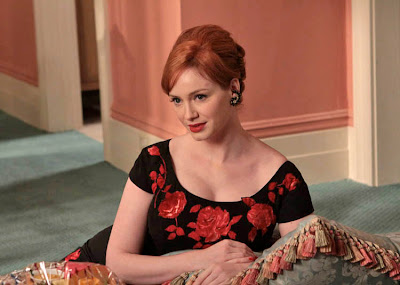 Well, come on in! Welcome to the apartment home of Greg and Joan Harris (nee Holloway), wonderfully sourced and styled by the talented set decorator Amy Wells, production designer Dan Bishop* and their design teams at Mad Men.


It is definitely girly, all done up in coral pink and seafoam green. Or in other words, shades of red and green. You do remember that the former Joan Holloway got married during the Christmas season, right?


Add in some cream, turquoise, gold accents, robin's egg blue in the kitchen, lavender or lilac in the bedroom, and you have Joan's complete interior color scheme for her amazing pink apartment. 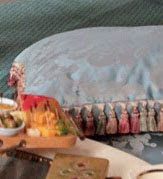 So, let's start with that sumptuous floor pillow Joanie is lounging on above. This would be easy to replicate with some damask fabric and the same kind of trim which can still be found at any fabric store, some 30 decades later. How about a mix and match of the two below from Wrights trims? 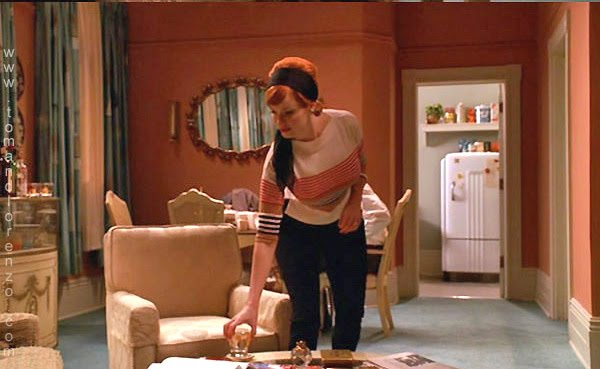 In this view, we can see the green graphic patterned drapes alongside shorter cream or eggshell colored sheers; a gilded oval mirror, candle sconces, and her cream painted dining set with cane back chairs. Notice that her walls are in a deep coral (or salmon) and that the trim is that color that landlords still stick you with today, Antique White/Apartment Beige (or as it's called in the U.K, Magnolia). At least she has the wall-to-wall seafoam green carpet to augment her color scheme.

General Electric refrigerator for S. 3 and newer one for S.4 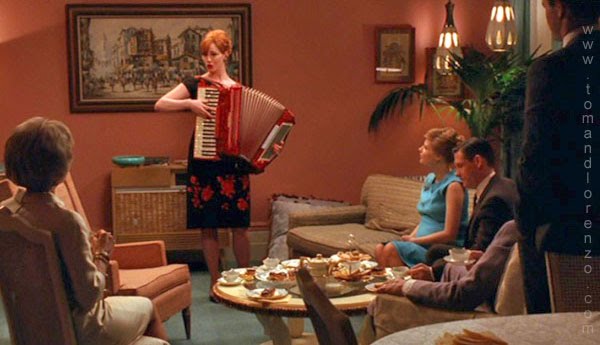 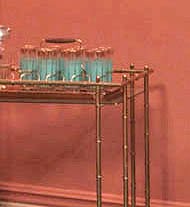 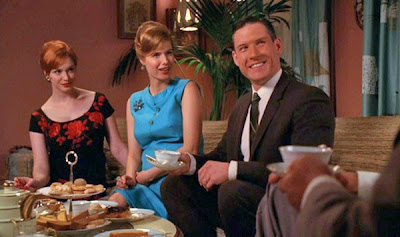 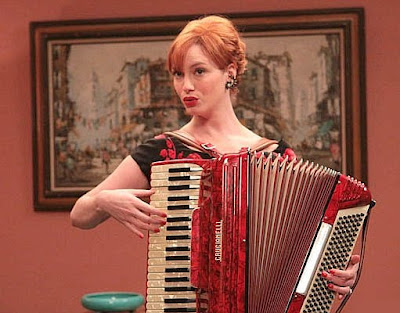 Update: Picture of Joanie's bedroom, just ignore the exhausted diva in her jammies. 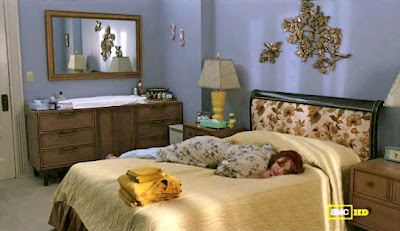 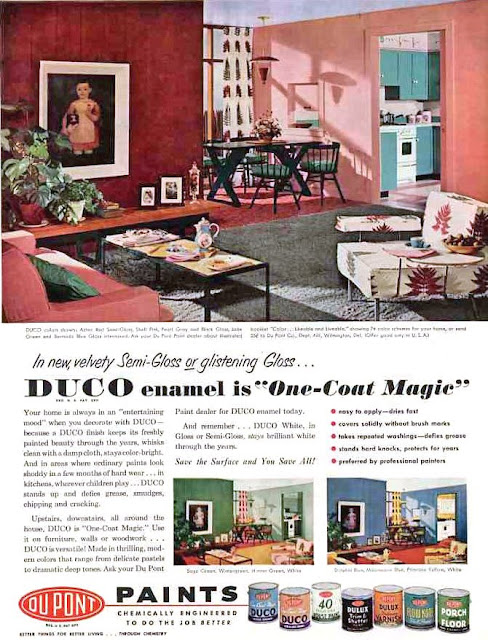 Images: Courtesy of Tom and Lorenzo (Thank you SO much guys!), A La Modern, AMC, Retro Renovation

*Links to two online versions of Etiquette: in Society, in Business, in Politics and at Home, 1922.