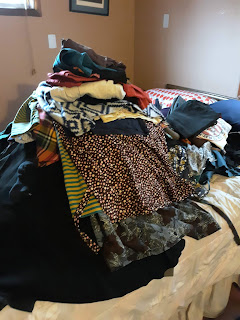 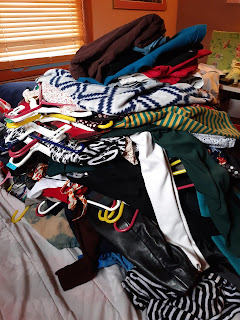 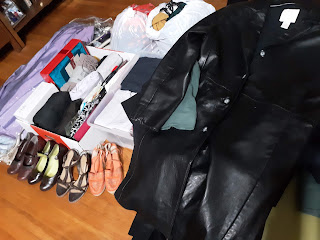 Outerwear: I gave away five jackets/coats which could not close over my hips. I kept the four that fit; three I bought recently and my handmade Issey Miyake-designed coat.

Tops: I found out my wardrobe is 70% tops. I am severely lacking in coordinating skirts and pants.

Pants/jeans: I found a well-fitting pair of jeans recently bought (during Covid) that I had lost track of in my closet! I now have four wearable pairs of jeans and two pairs of knit pants.

Scarves: I had several but never wore them. ALL GONE.

Underwear: Two sad bras are now gone, and I replaced some worn underwear and socks.

Purses: I thought I had maybe 6-7, but I had SIXTEEN bags! How did that happen? I now plan on storing the bags that I kept in a way where I will see them and use them more.

Shoes: There were so many that I no longer wore. I lost five uncomfortable or worn pairs. The others will be stored so that I can see them and wear them more often.

Coming up next, more of the KonMari process...
*The year that must not be named.
Written by lsaspacey at Monday, February 15, 2021 2 comments:

Way back, at the end of 2019, I updated my dad's kitchen in the house I grew up in. I realized I never wrote about it here, even though the research and planning took up most of my time and energy. I guess it took me all of last year to process! 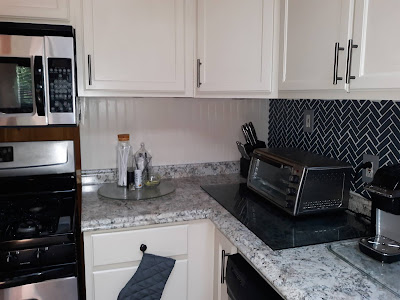 Our kitchen has always been a project because it was subject to my father's whims. He would "makeover" the cabinets, backsplash, countertop, and appliances whenever he spied a bargain at a retail or thrift store. Oh, the memories; the silver tin backsplash, mismatched cabinets in different wood grains, awkward cabinet placement that limited accessibility, replacing two useful dish cabinets with a wine rack, and lots of kitschy knick-knacks, many of them depictions of roosters!
While my dad agreed to my plan to start over and have a complete redesign, there were tense negotiations on almost everything. Some of them:
The picture above shows how it looks now, and below is a rundown of almost everything we purchased to change it and make the kitchen look cohesive and much more functional. If you want, take a deep breath, and scroll to the bottom to see how it was. 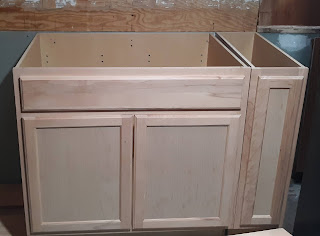 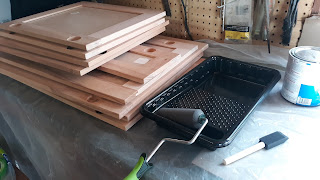 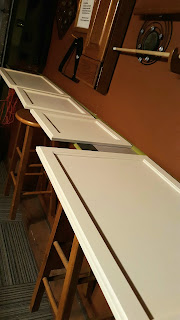 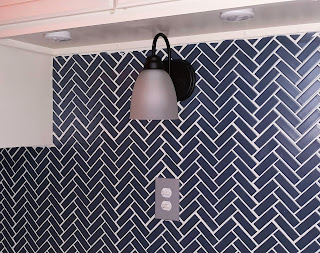 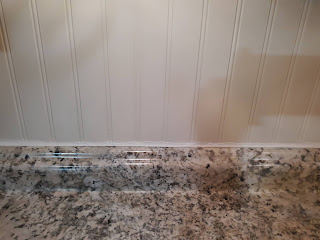 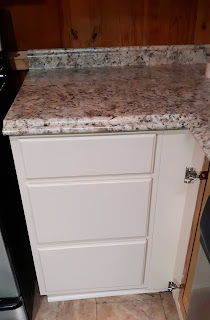 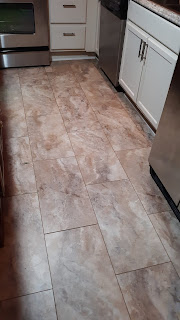 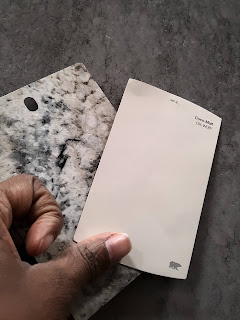 *I actually wanted to order this flooring in gray, but that was nixed. It's my one regret, and I often think of it, especially after something spills on the lighter floor. 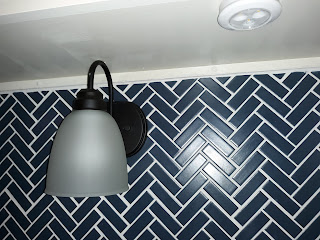 My inspiration for the mix of cabinet hardware: 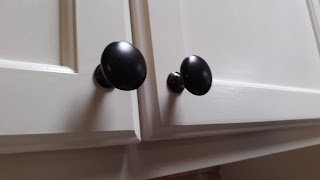 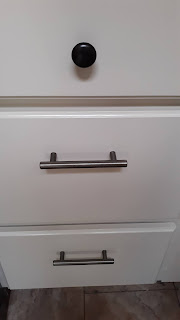 Not Pictured:
Renovation total without supplies was $2,090.30.

No, not more garment sewing but some necessary and long overdue home sewing. 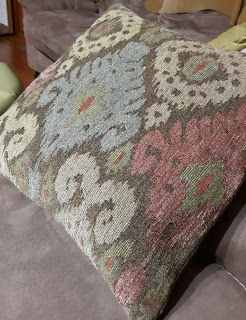 In 2016, I created two custom slipcovers for a 62" wide octagonal ottoman we use for a coffee table, one in a wipeable vinyl and another in upholstery fabric. Before 2021 arrives, I have now finished the matching sofa pillows in that same subtle green, brown, teal, and orange Ikat print upholstery fabric. (Let's just say I have a little problem with procrastination, ok?)
It wasn't difficult because I had the help of my first Singer Sewing Reference Library book, Sewing for the Home. My favorite method for covering pillows is their version that has an overlap closure. 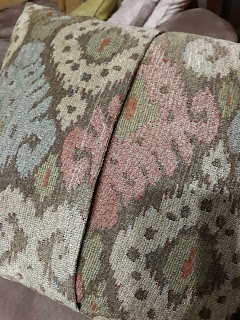 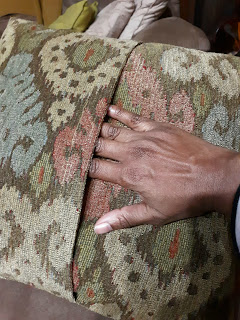 So easy, so elegant, so quick! If you don't have this book, there is a very similar tutorial from So Much Better With Age. I also found one by The Crafting Nook that uses one piece of fabric, simplifying the process. 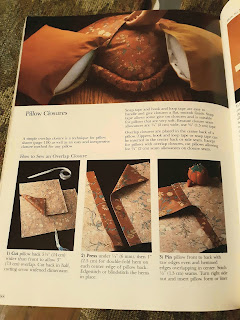 I could have used a ruler and measured the 17" x 17" front and 17" x 22-1/2" back pieces right on the fabric. Instead, I created one paper pattern measuring 17" x 22-1/2," which at full size I could cut the pillow back. By folding it under at the 17" line, I could also cut the pillow front. Therefore, one pattern could be used for both parts. 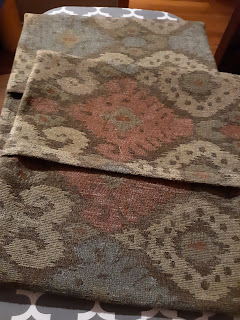 During construction, I reinforced all the stress points by double stitching at each corner and the overlap area, knowing that these pillows would need to be hardworking. I then steamed every seam and pressed them with a clapper to create flat crisp edges.
This is a great way to change your decor quickly and cheaply; it takes less than two yards per typical couch accent pillow. An added bonus is that if you chose only machine-washable fabrics, spills are no longer a problem if you move quickly.
Written by lsaspacey at Tuesday, December 29, 2020 2 comments: 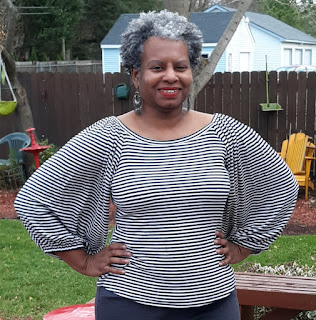 Pattern Sizing: XS-4X, I cut out an XL, even though my measurements call for size L. 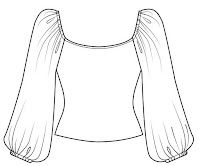 Did it look like the photo/drawing on the pattern envelope once you were done sewing with it? It looked exactly like it!

Were the instructions easy to follow? This is such a simple top. The only thing that might cause difficulty is if you are not familiar with sewing knits. Otherwise, this is a very quick sew once you figure out your preferred amount of wearing ease. 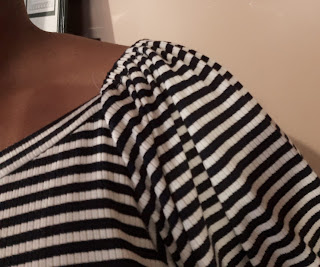 What did you particularly like or dislike about the pattern? I fell in love with the neckline, the gathered shoulders, and the drama of those full sleeves. 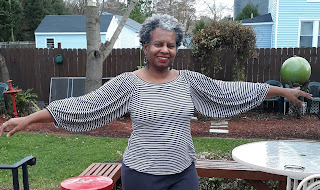 Pattern alterations or any design changes you made: With this first one, I choose to sew it with no alterations, not even a full bust adjustment. I have another knit ready for my final version, so this is also a muslin. 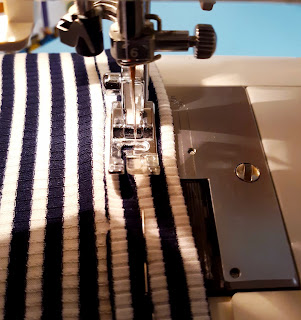 I cut this in the XL size even though the pattern measurements suggested I make the L to fit bust measurements of 38" to 39". I chose to work on the side of caution and go larger because the pattern calls for 6-1/2" in negative ease! I wanted a fit that I would feel comfortable wearing and was scared of it looking too small and like a sausage casing, to be truthful. 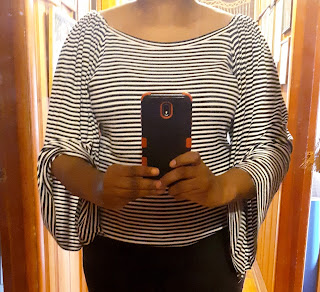 Of course, it turned out too large, and I ended up opening the side seams and taking them in along with the armscye. I believe it ended up equivalent to the Large. I didn't reopen the elastic at the shoulders, so the neckline didn't get reduced and is too loose. I now believe a size L with a full bust adjustment might have been fine. 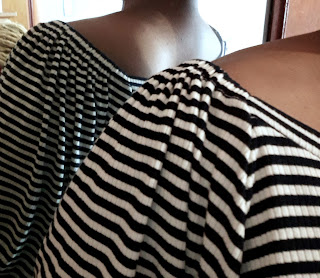 Would you sew it again? Would you recommend it to others? Yes, I will definitely make this again after I figure out the right size to cut.

Conclusion: I have been seeking out versions of this top for months, knowing I wanted to make not one but several of these. I love the finished ones I've seen, especially all the print versions and the dress hacks out there. 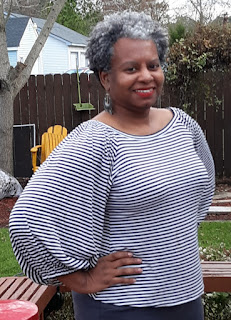 After a while, I realized why I was immediately drawn to this pattern. It strongly resembles the gently squared necklines of two of my favorite dresses, both worn for royal weddings: 1) Mette-Marit, Crown Princess of Norway's dress designed by Ove Harder Finseth, and 2) Lady Sarah Chatto's dress by Jasper Conran. The Adrienne blouse only ups that wow factor by adding a much fuller and gathered sleeve. I already have a lush ivory knit in mind for a winter-white knit version.
Written by lsaspacey at Sunday, December 27, 2020 2 comments: