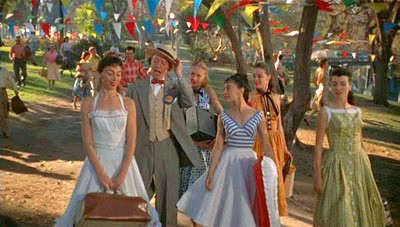 Check out those lovelies above from the company picnic scene in 1957's The Pajama Game starring Doris Day. This scene is a large part of the film and is filled with summer dresses like these. Great inspiration all around, even in the choice of colors, there was definitely a defined color story involved. In group shots, you will notice a repeat of the same color or an equal number of striped or checked garments interspersed around. The men also wear these great gingham shirts where the squares, usually 1/4 to 2 inches, are done up in truly over-sized checks; note the orange one on the fellow in the background above. 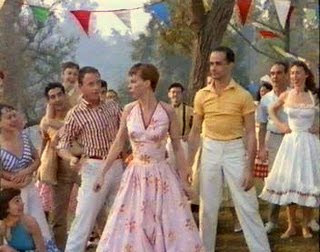 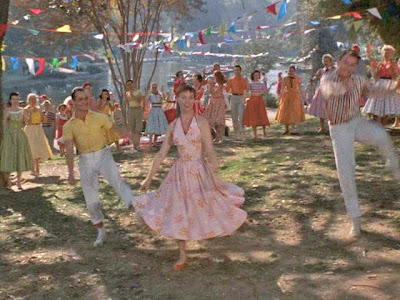 This was one of my favorites dresses (the blue+white sailor-inspired one above is another) as I love the combination of pink+orange or red+orange. Actually, I think orange looks great with everything, depending on the shades. I love the dark orange piping around the bodice and the exuberant orange petticoat. The petticoats under all the dresses added surprise to the dance scenes, see that baby blue dress below with the lime green underskirt? 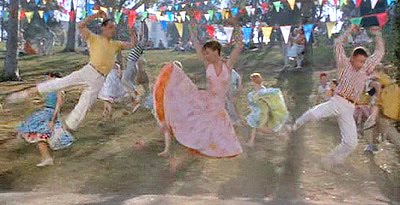 Meet the exuberant Carol Haney (above and below), who steals this movie away from Doris and the male lead, John Raitt, in his only leading film role. A Bob Fosse dancer, she originated the Gladys role in the 1954 musical. You can see an eerie future influence when you know that Shirley MacLaine was her understudy for the role on Broadway. They seem to have had similar haircuts and color, right? 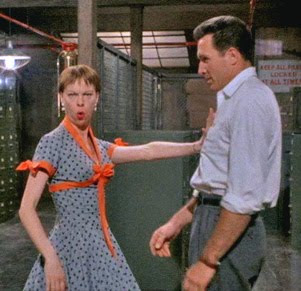 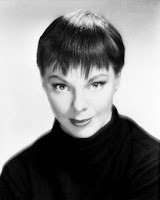 Notice the exuberant, brightly colored and highly graphic "factory" outfits on the women below. You can't ask for any more excitement in the work place, can you? Check out the bright pinks and those crazy-loud stripes on the left and do you see the extreme pattern mixing on that first jumper with mustard stripes worn over a pink+red floral print with a starched white collar? 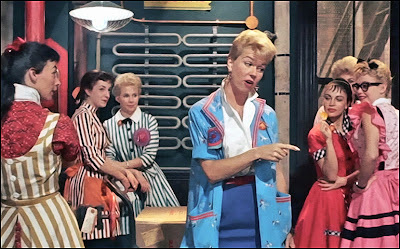 Finally, we come to Doris, the actual title star of the movie. Her best outfit, seen at the picnic, is a full white dress with a tiny blue scarf worn around her neck. Unfortunately, I could only find one color picture online. Also, here are two of her work/play outfits, notice the same colors as found in the picnic scenes and also the use of gingham and stripes. The red shirt reminds me that I want to make some spring pieces out of gingham for next year. 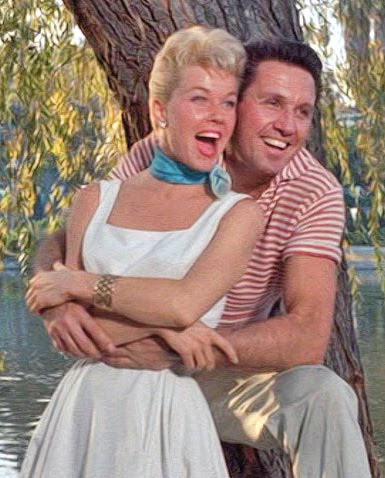 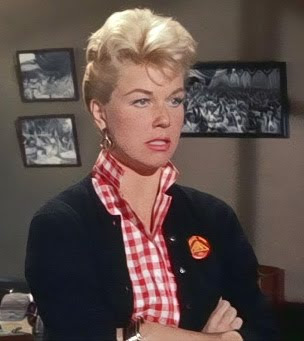 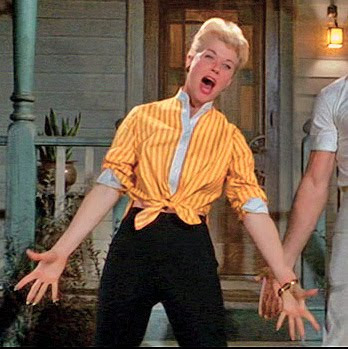 Having never seen the play or movie before, I was extremely surprised how many of its songs I had heard before. There were so many memorable songs in this production, songs like Hernando's Hideaway, Steam Heat, Hey There, and There Once Was A Man*. That last song is amazing, exuberant, and fun. It has almost a Sondheim feel to it, and I love me some Sondheim.

Over all, it was an enjoyable film, despite the non-feminist message, and because of the definite eye-candy quality of the costumes.

*Links lead to the performances on YouTube.
Written by lsaspacey at Tuesday, November 29, 2011 5 comments:

Holiday Haul Of Books - If I Win, You Win

This year I am participating in the Chronicle Books Happy Haul-idays contest.

It's wonderful, you can enter to win $500 worth of books from one of the best publishing houses! To enter, all I have to do is post my book wish list and designate a charity, in my case, the Susan G. Komen Foundation. The bonus for you is that by commenting on this post, if I win a randomly selected commenter will also win the same list of books. Free. So let me know what you think about my choices or what book do you wish was on the list.

Here is my list of Chronicle books that I would buy with $500:

Progress, but no progress worth photographing. Just comparing my coat armscye to other well-fitting garments. I had no idea that pattern alteration would get me so anxious. I just want this to work so much that I'm scared to cut into the pattern. I should just trust my instructions.

Next project: A stuffed toy for my step-grandniece. There are so many choices to choose from, but I only have until next Wednesday. 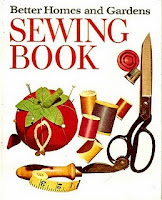 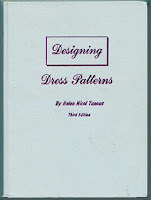 By the way, I now have my own practically never-used copies of both the1961 Better Homes & Gardens Sewing Book for just $7 and the 1971 copy of Designing Dress Patterns, Third Edition by Helen Nicol Tanous for $2.44!

I ordered them from Alibris.com,* my favorite place for used books and better yet, these books are in excellent condition; no marks, discoloration, warping, bent or ragged pages, and the covers are in excellent condition too. The only negative is that being in storage for so long, they have a horrendous musty odor. So no pictures until they come out of their "cage" (a tightly closed plastic bag with a box of baking soda). But, really they look just like the photos above!

*I have yet to get a book from Alibris that wasn't in near brand new condition. You just have to look for sellers with the best ratings and very thorough product descriptions. These made both books sound worse than they really are.
Written by lsaspacey at Wednesday, November 16, 2011 4 comments:

Sorry, no progress to show. All of my garment construction has been happening in my head...I have been researching fitting and adjustment materials to improve the fit of my garments.

I was first looking for info on narrow back adjustments for the coat, which lead to looking in those same sources for remedies to the fit issues of the Colette Pastille (too-long bodice, narrow back adj?), my potential Colette Clovers (full belly adj, crotch length, sway back?) and instructions on grading my Vogue 1922 pants pattern up two sizes.

It led me to decide to wait a bit on alterations. The research led me to the conclusion that what I really needed to do first was the basics: I needed to record my personal measurements. This is also the first step to drafting my own patterns.

To help others here are some sources I have found interesting:

The biggest thing I found was that different sources have different ideas on what "the" essential measurements are and also have different ways of correctly measuring them.

So I am going to pick one source and follow through with that system's plan for doing adjustments since those personal measurements are essential to make the correct changes. I will be using the AgriLife Extension series for both my measurements and for alterations for Vogue 7714, the Pastille and the Clovers. I will use the Threads instructions to grade up my Vogue 1922 pants pattern.

The best thing is that once I have my measurements recorded I can compare them to paper patterns and make some changes even before the first muslin is made.

Save time and fabric? Sounds good to me!
Written by lsaspacey at Tuesday, November 08, 2011 2 comments:

Fitting Issues with my Pastille 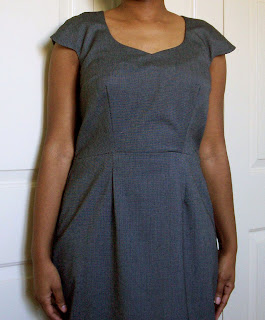 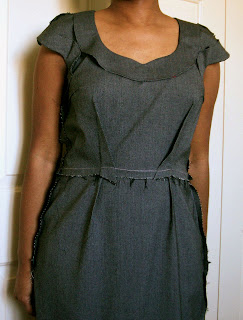 Doesn't look that bad from the front, right? That is if you didn't know my waist was smaller than this, you wouldn't be suspicious. However, the dress is too big at the waist and directly above and below despite my measurements exactly matching the pattern measurements. Just goes to show you, it really is proportion and how your body is distributed, not the size numbers or the weight.

However, check out the back.* Despite how pretty close it fits in front that is some truly excessive fabric pooling back here. I had no idea about that until I went ahead and basted in the zipper to check. Thankfully, I do have more of this fabric if I need to cut two new back pieces (and there is still some in the stores too) However, I really don't want to redo that neckline and facing. I did a great job the first time. 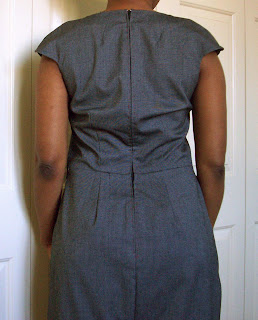 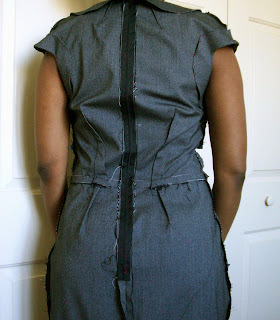 I can't say this is a sway back problem because it fits great over the rear. This is more a back length problem, I think the bodice is too long for my body. The zipper is only hand-basted so I can remove that and maybe bring in the width by at least a 1/2" on both sides, deepen the darts and shorten the back bodice. 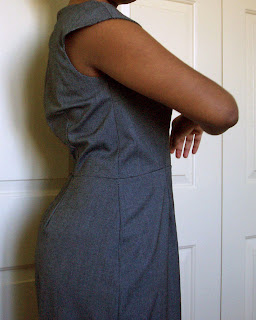 Also, can you see how the waistline dips down towards the back? It's even more obvious when my arms are down. At that side seam, my actual waist is at least one inch above that line. Though it might have stretched while it was on the hanger. I like the way the skirt fits so I only want to alter the back bodice pieces. Any suggestions?

These two pictures show where my actual waist is located compared to the waistline of the dress, a more than one inch difference. This is where comprehensive body measurements or a muslin could have really helped me out.* 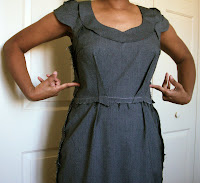 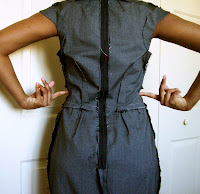 That is why I started to look up information on taking your correct body measurements that can be compared to pattern pieces before a muslin is cut out.* I will be writing about that in another post that will include all the online and print resources that I have found.

*I promise I will never NOT make a muslin again!
Written by lsaspacey at Friday, November 04, 2011 11 comments: