She Said Yes To The Dress! 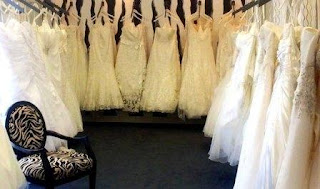 Two weekends ago, I drove down to North Carolina to meet up with my two older sisters, my niece D (who's getting married next June), her twin sister S, and her future sister and mother-in-law. The wedding venue and bridesmaid dresses had already been selected and we were set to visit three bridal salons in two days to help pick out a bridal gown. This was the first time any of the females in my immediate family had gone to a bridal establishment to purchase a dress. My eldest sister bought her white lace dress from regular retail. The other sister, the mother of the bride, collaborated 20-some years ago on a design that had the bride and I hand-applying beads and sequins to individual cut pieces of lace that our late mother then sewed into her dream dress.

The MOTB and her family live in New Jersey so a visit once a year is how I saw the girls and their older brother grow up. However, I had been following the bride's Pinterest board since the engagement and had seen every dress and wedding detail she pinned so I already knew her style. She had a clear idea of what she wanted; the majority of the dresses were sleeveless, fit and flare or trumpet-skirted, all-over lace dresses with sweetheart necklines, and either a keyhole or open back, sometimes with lace layered over the opening.

The first place, NY Bride & Groom of Raleigh, located in a small shopping center did not look impressive from the outside. However, inside was a glamorous white and gray salon with rows of racks holding about 300 dresses from twelve brands, all under $3,000. Appointments were not needed at this salon, photos were welcome, and we were free to walk around and see every dress. We arrived at opening time and everyone immediately went around grabbing dresses that were brought back to a small private room with seating for all and a staging area with a mini-platform and full-length mirror.


D tried on the first dress, selected by her mother. It was a lace dress with a sequined v-neckline and a gorgeous champagne gold lining that looked amazing on her skin, however it had an illusion back that did not match her skin color and wrinkled when she moved, giving the appearance of droopy pantyhose. A disadvantage of this shop was that even though my niece is slim, most of the sample dresses that appealed to her weren't available in her size and had to be forcibly coaxed on and then would fit like sausage casings at the hip (and my niece doesn't really have hips!), which I'm sure made it very hard for her to judge. However, during this time, she did discover that she preferred a v-neckline, she no longer wanted cap sleeves, and she definitely wanted a low and open back. After she tried on the initial eight or so dresses chosen, I wanted to be sure that we saw everything that was available so I went up each and every row with what the bride said she wanted in mind: all-over lace or beading, sweetheart or v-neck, sleeveless but with substantial straps, fit and flare shape, and an open back or keyhole detail. You would think that vague description would mean I came back with more than just two other dresses but no. The majority of the dresses there were strapless, ball gowns, or a combination of both!

We ended up with two final contenders, a champagne-colored fit & flare with a v-neck bead encrusted bodice with an illusion back, Style 1631 by Kenneth Winston's Private Label by G and an embroidered and crystal beaded v-neck Blakely by Maggie Sottero, a fit & flare also with a sheer embroidered back that I chose in that last dash around the store. I later realized that its delicate crystal beading reminded me of Eliza Doolittle's own twinkly white gown in My Fair Lady. This was a reference that was lost on my crew...all those women looking for a fancy white gown and nobody got it? What?! 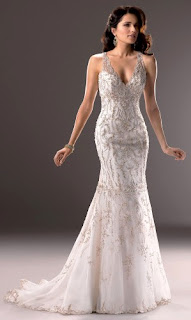 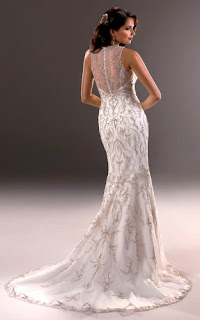 Both dresses were brought to the store's wonderfully large 360 degree mirrored area for real contemplation and D still could not make up her mind. I think everyone would have been fine with either dress had they had open backs. However, each dress would have needed to be extensively altered to achieve the desired result.


The next place we visited, after a much needed lunch, Maggi Bridal, was appointment-only and possessed a smaller dress selection. There were only five dresses that fit the description we were seeking and there was one with a silvery-gray lining that was a favorite of both the bride and groom's mothers. After a while, we had seen all the dresses D had selected when we first arrived. At that point, D mentioned one she had discussed on the phone with Laura, the store owner when the appointment was made. The dress was a brand new Alfred Angelo design, best described as an all-over lace gown with re-embroidered lace medallions, sweetheart neckline, sheer straps, keyhole back, fit and flare style with a chapel train. In other words, it looked as close to the ones she had pinned as you could get.

Once D was in the dress; which was unadorned (no bling) compared to the ones from earlier, the consultant added an elbow-length crystal trimmed veil and an Art Deco-inspired beaded belt to the lace dress, and long story short, that dress became “the one.” While discussing the possibility of adding a different color lining, D plainly said "This is the dress, but..." It took a minute for her to realize what she had just said and then she started crying. Well, we all started crying...which strangely didn't last long because a detailed discussion about the possible alterations that could be made to that simple belt broke out between the mothers even though the bride could not have cared less. She had her dress...and all was right in the world.

Now, this dress wasn't perfect either, they are still going to alter the back in order to open up the keyhole and bring it down lower on her back. I'm extremely happy that she got exactly what she went in there to get and that we didn't cause our bride to cry in frustration or sadness. Funny, how much you start to expect after you've watched more than a few episodes of TLC's Say Yes to the Dress*. 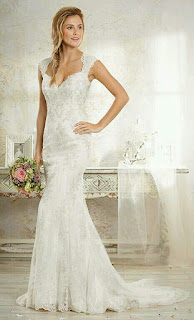 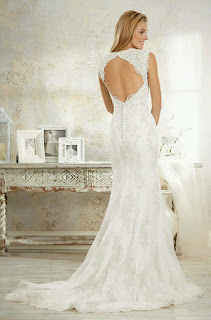 Strangely, in these photos the dress looks shiny but the actual dress is not. (see teaser photo above)

I am so happy I got to experience this with her. I didn't mention above but I was the family member helping wrangle her into that first group of dresses with their too tight fit and multitudes of tiny buttons on delicate net, and making the decision of whether she should step into the dress or put it on over the head. Oh how many times we made the wrong first choice on that last one! If that sweaty and awkward time does not cement a lasting aunt/niece bond, then I don't know what else would! In fact, I am also consulting on her save-the-dates, wedding invitations, and other printed paper goods. For me, having been lost in retail for the last two years, doing something this close to what I did for a living is breathing life back into me.

In addition, I will be making the dress I will wear to the wedding and I have decided that it is time to SEW SILK for the first time, so stay tuned.