Jean Patou is considered the first real designer of women’s sportswear. He combined austere silhouettes with comfortable cuts. He created his clothing for the healthy and active women of the 1920s. He was responsible for the popularity of knitted wool jersey swimsuits and simple cardigans. Many of his clothes also bore his monogram, years before that kind of fashion branding became popular.

Jean Patou had been active in fashion since 1907, owning a small boutique. His career was then interrupted when war broke out. In 1919, after returning from service he founded his couture house and its inaugural collection was an immediate success.


Patou always felt that his real adversary was Coco Chanel. During their long rivalry, Patou raised the waistline in 1929 to its natural level and lengthened skirts after viewing a new collection by Chanel. In 1932, he then lowered the waistline again.


Patou would create so many clothes each season that he would need to show his huge collections in two parts. The morning sessions were devoted to sports clothes and beach pajamas while the afternoon would be focused on formal day and evening clothes.

He specialized in tennis clothes, dressing famous tennis player and Wimbledon winner Suzanne Lenglen, on and off the court. In 1925, he opened the Sports Corner where he presented his sportswear collections. Each room in the Sports Corner was devoted to a different sport such as tennis, golf, or skiing and all the clothing could be coordinated with accessories like scarves, gloves, and caps.


Some of his most popular looks were pleated straight silk skirts worn with white cardigans. Even though he believed in strong lines and clear colors, he used beige as a base color. Sometimes he utilized folkloric embroideries and Art Nouveau geometric designs on his garments. Other popular garments were his “cubist”-inspired color-blocked sweaters.


Hollywood Connection: He designed for clients, such as actors Mary Pickford and Pola Negri. He also designed costumes for French films, such as Beauty Prize (1930) where he dressed the American actor Louise Brooks.


His style, innovations, and lasting influence on fashion:

Sources: Couture: An Illustrated History of the Great Paris Designers and Their Creations (1972) Ruth Lynam; Fashion: The Century of the Designer, 1900-1999 (1999) Charlotte Seeling.
Written by lsaspacey at Wednesday, April 27, 2011 1 comment:

The Color Side of Necklaces 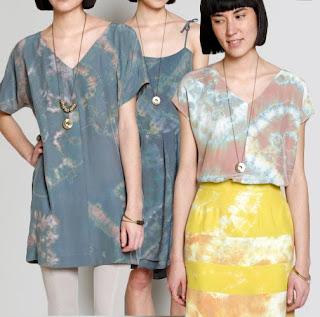 The other side of the coin is one also needs to bring color into the wardrobe in other ways. Why not try a colorful necklace? Perhaps something fun and whimsical?

Though these necklaces are metallic, the color of these Shabd fabric prints at Totokaelo lighten the mood and celebrate the great weather coming to us here on the East Coast of the U.S. You won't find fabric like that at Jo-Anns though. So a colorful piece around your neck may be the best way to go. 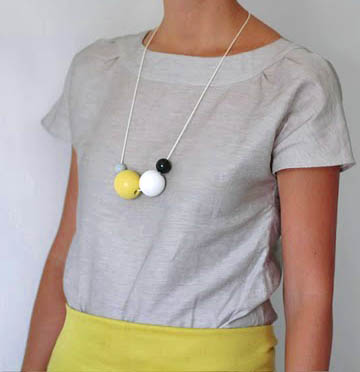 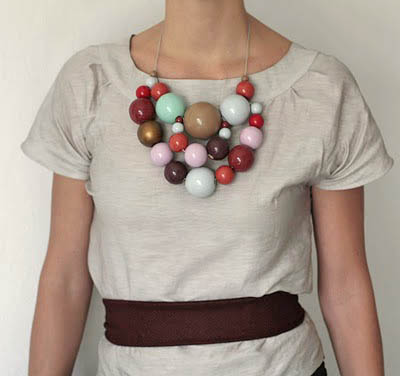 
First up, are these gorgeous wooden enameled bead necklaces. Unfortunately, these two specific Kristina Klarin necklaces are no longer available but I love her style (check out her personal blog here). They set me off on another journey looking for something similar and that is how I found the necklace below offered by The Vamoose. 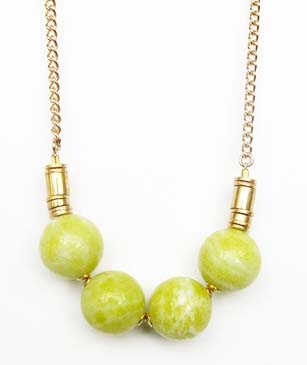 However, these types of designs could be easy to duplicate, especially if using cord instead of chain, you just need to purchase some wooden balls, some cool tester pots of paint, some silk cord and use this tutorial provided by Jenny Gordy at Wikstenmade.


Another why to bring in color is to incorporate floral images such as these by new-to-me company, Ruche: 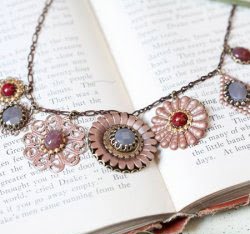 
I think I've already found my colored necklace. It's only $40 dollars so I will probably get it as an "I survived another semester of college" gift in a few weeks after I actually survived. Here are some pics from the amazing site where I found it, Elk Accessories in Australia: 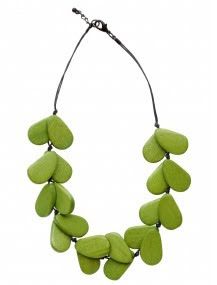 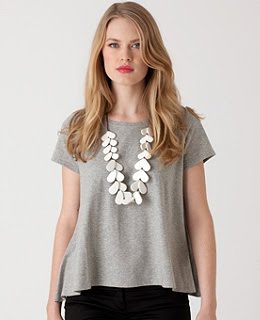 
Edward Molyneux was born in London of Irish parents. At age 17, he won a design competition held by British couturier Lucile and began sketching for her design house. During a stint in the British army from 1914-1917, where he earned the rank of captain, he was injured and lost sight in one eye. When he returned in 1919, he opened his own couture house in Paris and in time followed that with branches in Monte Carlo, Cannes, and in London.


He was known for conservative, well-bred, fluid, elegant clothes with a pure uncluttered line. Even his evening dresses possessed simplicity and a touch of severity. His customers were never over- or under- dressed.


In 1934, Princess Marina of Greece ordered her bridal gown and trousseau from Molyneux for her wedding to the Duke of Kent. This single commission made his reputation in royal social circles and his future clients would include the Duchess of Windsor and actress Merle Oberon.

In 1939, he relocated to his London branch offices. During WWII, Molyneux designed Utility clothing – garments that met the strict fabric ration laws set up during the war. He also provided clothing that could be used in films produced by the British film industry. In addition, he was commissioned, along with other British designers, to create uniforms for the women in the British Armed Forces.


He later reopened his Paris house in 1946 and at that time enhanced his business by adding furs, lingerie, hats, and perfume to his available products. In 1950, when the vision started to fail in his remaining eye, Molyneux decided to closed his Paris and London establishments and retire to Jamaica.


His style, innovations, and influence on fashion:
Images: Metropolitan Museum of Art, V & A Museum Textiles and Fashion collection.

Okay, it's been quiet on the sewing front. I'm very disappointed because I had some lovely things in mind. I can't believe I haven't attempted to sew since that hiccup in February with the unfinished corduroy skirt (now scheduled for a fall completion). I also kept meaning to make my Simplicity 2560 cardigan out of a fuchsia knit I bought but the motivation is just not there.

Well, I now have a new pattern for a slim column of a spring dress and I was so expecting to find some colorful spring fabrics to make it. However, a trip to Hancock Fabrics, Jo-Anns, and even Hobby Lobby left me cold. There was a great turquoise from the new Lisette fabric line but I wanted a fabric that had more drape.

Guess what? I ended up with a wonderful fabric that totally goes against what I've been posting lately. I bought BLACK fabric!

Now, it is technically black and white but from a distance it will read black. A cotton, polyester, and Lycra mix, it has a very nice drapy hand. But when I picked it up I realized that the pattern and color would be great for job interviews and it might also look killer with my black and gray duster coat when it finally gets finished. In fact, this dress might motivate me to start on that!

So, wish me luck, I hope to have this done by the first week of May.

Give Me More Color!!! 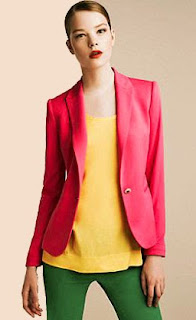 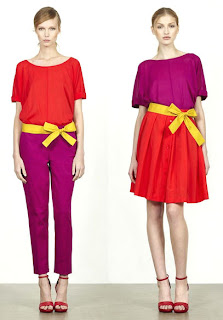 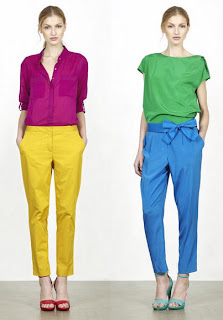 Norman Norell was known for his tailored silhouettes, elegant suits, and sequined gowns. Today, he is considered to have been one of the foremost American fashion designers with a style consisting of sophisticated and luxurious garments executed in a relaxed manner. After spending some time in military school during World War I, Norell studied illustration at Parsons School of Design and fashion design at Pratt Institute from 1920 to 1922. Born Norman Levinson, Norell changed his surname while at Pratt. He described his name change as, “ ‘Nor’ for Norman, ‘l’ for Levinson, with another ‘l’ added for looks.”


After graduation, he joined the East coast studios of Paramount Pictures and after a year went on to work for the Brooks Costume Company and for wholesale dress manufacturer Charles Armour. In 1928, like fellow designers McCardell and Cashin, he was hired by Hattie Carnegie, where he stayed until 1941.


At this time, businessman Anthony Traina approached Norell with a business proposal. Traina offered him a large salary if when he joined the company name did not have to change; however, Norell insisted and accepted a lower salary in exchange for the company name of Traina-Norrell.


One of his daytime to evening looks was the “subway coat”, a classic and inconspicuous wool coat that inside was lined with opulent sequins and worn with a matching sequined dress. In short, this ensemble was safe to wear on the subway as long as you kept the coat closed. Another of his daytime looks was a sleeveless jacket worn over a bow-tied blouse and slim skirt. That idea came to him because of the sleeveless vest that he wore over his own clothes when working.


The strength of Norell clothes was in their simplicity. They brought desired attention to the wearer as opposed to the clothes alone. Regular trips to Paris exposed him to the couture standards that made French clothes the best of high fashion and Norell had the ability to translate those aspects and techniques into American ready-to-wear.


For evening, Norell looked to the flashy glamour of his early days designing costumes for vaudeville. A lavish use of sequins became Norell’s signature ”mermaid” form-fitting sheath gowns. These sequin covered gowns, available in many colors and configurations, quickly became American fashion classics. In my opinion, almost any of these gowns could be worn today.


In 1960, Norell started his own label, Norman Norell Ltd. Unlike couture designers, who only produce a garment for a specific person, Norell applied his high-standards to mass produced garments. Even though his clothes were ready-to-wear, each Norell garment was handled from start-to-finish by the same worker.


Norell was a favorite of actress Lauren Bacall and created many pieces for her personal wardrobe.

Recently, Norell’s name was in the news when First Lady Michelle Obama chose to wear a vintage Norell to the 2010 “Christmas In Washington” concert.


Hollywood connection: In 1922, he joined the Astoria, NY studios of Paramount Pictures in Long Island where he designed clothes for Gloria Swanson, Rudolph Valentino, and other silent screen stars. He was only there for one year. However; in later years, he would create clothes for such motion pictures as That Touch of Mink (1962) and Klute (1971).

His style, innovations, and lasting influence on fashion:

Another Look At Statement Necklaces 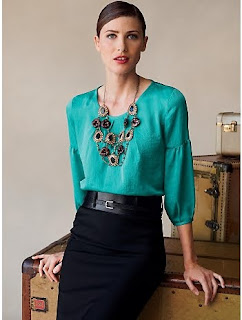 OK, I'm officially obsessed now. I can't stop searching for necklaces! So here are some more that I've found and there will probably be even more. I have also found some pretty fabulous jewelry tutorials too if I decide to save my money afterall.

These first three pictures (from Talbots and Totokaelo) show you how a great necklace (even worn without earrings) can make a simple outfit look polished and finished. Don't you agree?

See how a statement necklace pumps up even the most basic of garments? 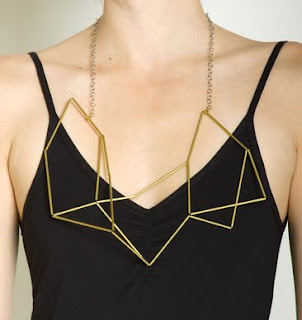 Samma Extended Study in Space, $288
This one is a little over the top (and out of my price range!), but it is adjustable and can change shape, either massed into a tinier shape or furled out like eagles wings, as seen here. 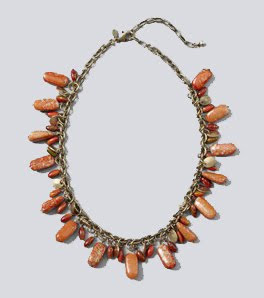 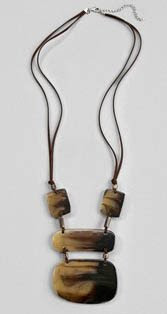 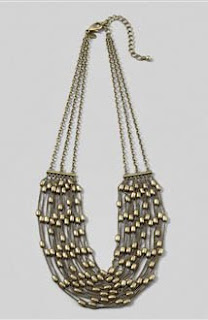 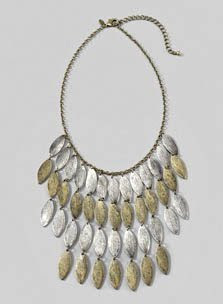 Believe it or not but the pieces above are all from maligned clothing manufacturer, Chico's. Note: In some otherwise fussy stores you may have to look through the overly designed to find the simpler designs but it can be worth it. 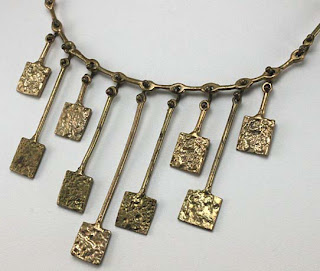 Modern abstract brass necklace, $125.
Is this not fabulous?! It should be, it's from online store Slap Me Fabulous. 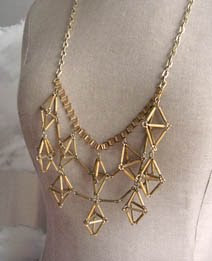 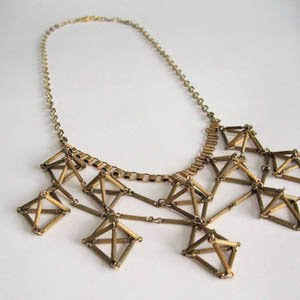 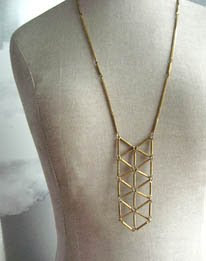 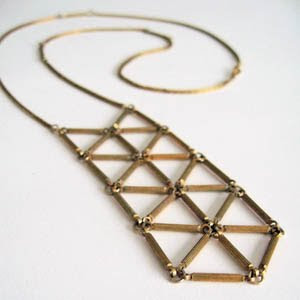 This store, Brodie Hall Jewelry came up in a Google image search after about an hour and I am in love! Isn't that last necklace almost perfect?
Any ideas which one from this or the other post I should buy? Please help.