As a child, I first saw Barbra Streisand in this movie; the love story of Fanny Brice and Nicky Arnstein, and I thought she was one of most beautiful women I had ever seen. I remember being shocked to find later that most people did not think she was attractive. Luckily, looking at the film later, I still believe in my first impression. In this film and in the flashback scenes in On A Clear Day You Can See Forever, it is obvious how regal and elegant Ms. Streisand was. Not only did the clothes flatter her figure while still being close to the fashions of the period in which the movie is based, the makeup and hair enhance her unique good looks of oval face, almond eyes, high cheekbones, and aquiline nose. 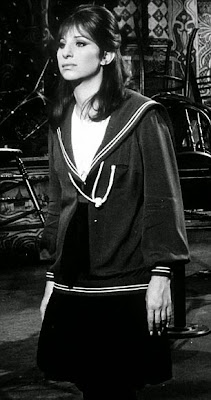 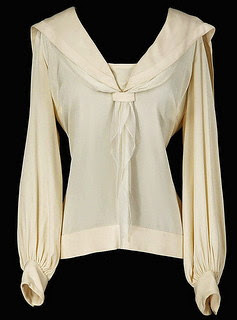 The movie begins depicting the ingénue Fanny Brice as she tries to break into vaudeville. One of the first things we see her in is a public schoolgirl smock, meant to illustrate her youth and innocence. Despite that, I find the white version of this top very interesting because of the drape of the fabric, it looks luxurious to me. 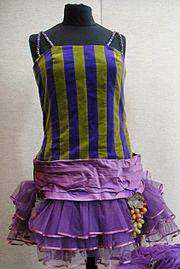 Her big break , "I'd Rather Be Blue", comes after she participates in an embarrassing early performance on roller skates. What I took from this costume is the unique color combination of moss green and blue striped velvet with a purple tulle skirt trimmed in satin with a matching sash. Not to be too sedate (ha!), it is also decorated with huge bunches of plastic grapes. 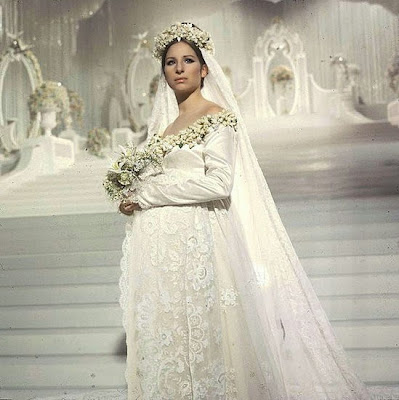 Fanny's big break comes when she is highlighted in a bridal skit as a beauty while her own self-consciousness takes the skit from schmaltzy romanticism to a shocking and funny conclusion, which almost results in her being fired. In the movie, this makes her a comedy star.
While that performance makes her a star it also wins her an admirer, the wealthy, suave, and wickedly handsome Nicky Arnstein (Omar Sharif). This is where the true FASHION of the movie begins. The clothes she wears as his lover and then as his wife are gorgeous. My favorite pre-marriage is the fussy purple dress (blue chiffon over purple satin) worn for her seduction in “You are Woman, I Am Man.” It is over-the-top because of its color, ample cleavage, sequins, beads, and floral embellishments; it even includes a voluminous bubble-skirted upper half ending in a hobbled skirt. 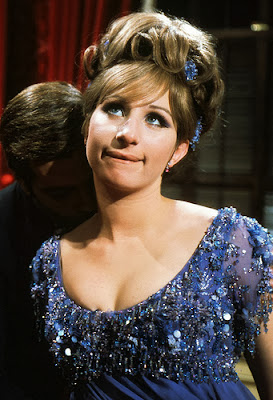 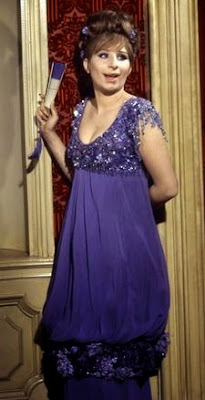 Clearly in this movie, designer Irene Sharaff chose to put the sartorial focus on Ms. Streisand’s nape and decolletage. Most of the formal dresses in the movie feature low scooped or squared necklines, much lower and more exposed than the true fashion of that time.

The "People" dress above was designed in olive green silk marquisette over pink satin which gave it an iridescence. 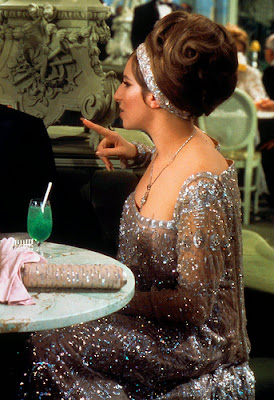 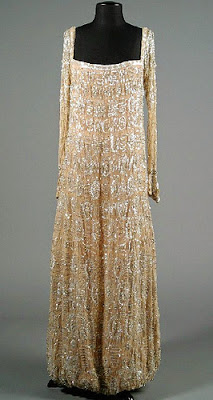 Another favorite is a dress that seemed to have been dipped in diamond dust. Accessorized with a matching clutch and headband, the dress just glows on film. As you can see above, while the dress is gorgeous when on display, it truly transforms itself when worn by Ms. Streisand.

As described on liveauctioneers.com: Full length, long sleeved evening dress with a low cut bodice and empire style waist. Constructed in layers, there is a fine silk under-shell with an overlay of chiffon netting encrusted with sequins and rhinestones. The very bottom of the dress has a layer of crinoline and a double layer of silk under dress giving the bottom a full appearance. The sleeves feature snaps as does the entire back of the over-lay. 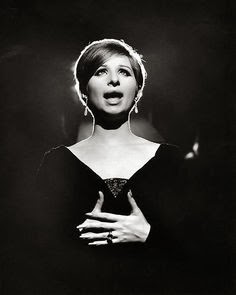 The photography and design of the "My Man" scene is again done to her great advantage. Dressing her in all black velvet with a black background and a lone spotlight on her torso, her skin seems as alabaster as her pearl drop earrings. The lighting and framing help make the already emotional song even more dramatic and powerful.

Everyone remembers the barge scene of "Don't Rain On My Parade" but what about the rich marmalade orange of her ensemble? Perfectly coordinated with the yellow roses in her bouquet and her brown sable or mink hat and muff, the two-piece wool outfit with Nehru collar was cropped at the front waist but constructed like a frock coat with "tails", The zig-zag overlapping tiers of the skirt followed the hobbled silhouette of the times and really show when she frantically runs for both her cab and for the boats. The dress was also tested in emerald green which I may have preferred when shown against the blue tug boat. I also think the color may have been more flattering for Ms. Streisand's complexion. 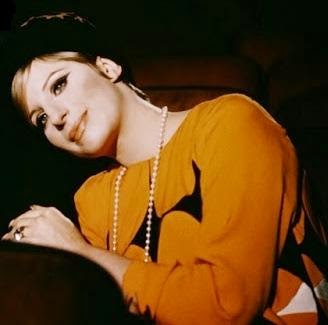 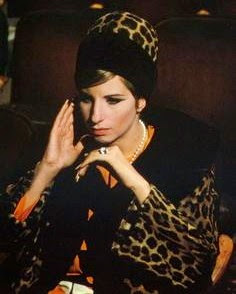 How strange that she is also wearing the same color combination as when they finally decide to call the relationship quits. Now in the 1930s, Franny is wearing a Sonia Delaunay-inspired dress in pumpkin orange, black, and white, with a long rope of pearls. It is worn under a leopard and black fur coat with matching hat.
Miscellaneous costumes: 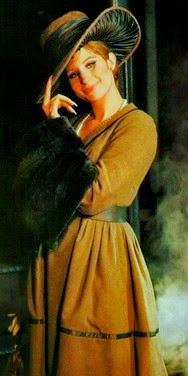 Got The Blues Work Shirt - Built By Wendy (Sew U) 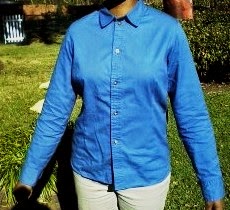 Pattern: Built By Wendy button-down shirt from the Sew U book (2006)

Pattern Sizing: XS-Large. According to the book's size chart I should make a Large (size 10-12 ). I ended up cutting a Medium from the shoulders to the waist and then tapering out to the Large for my hips. 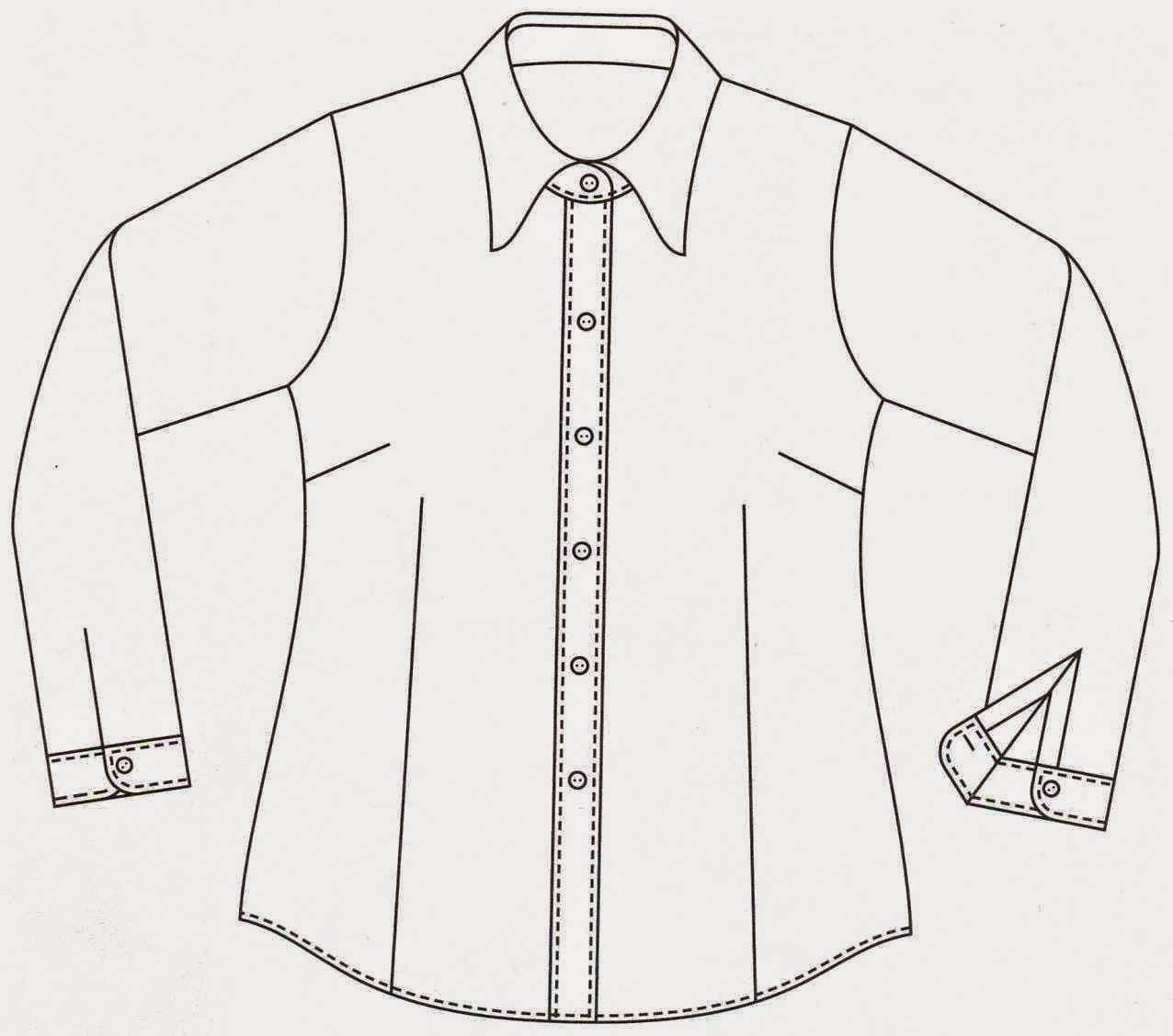 Did it look like the photo/drawing on the pattern envelope once you were done sewing it? Surprisingly, yes, since I refashioned the shirt from an existing RTW man's shirt.


What did you particularly like or dislike about the pattern? It was a more simplified version of the button-down, this version eliminated the back yoke detail. The pattern also included shaping for a feminine shape. However, the best thing about this shirt pattern and instructions were the many ways the shirt could be customized.


Pattern Alterations or any design changes you made?: First thing first, I had to cut the shirt down to my proportions using the Sew U pattern. That involved my trusty seam ripper and I took apart the side seams, removed the cuffs and took apart the flat-felled sleeve seams. I then cut out the shirt fronts aligning the pattern hem with the existing finished shirt hem. The original shirt came complete with a self-lined yoke and back pleat. The shirt was so much larger that these were not touched in the pattern cutting and were both removed. 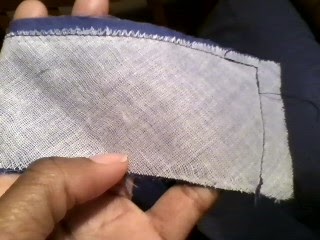 I cut the new sleeves from the originals lining up the pattern edge with the original sleeve hem edge; therefore, retaining the finished sleeve plackets . 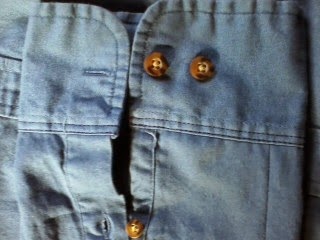 I adjusted the new sleeve width by adding a tuck so that the sleeve could slip inside the original sleeve cuffs. I then added a new line of topstitching to secure them there. 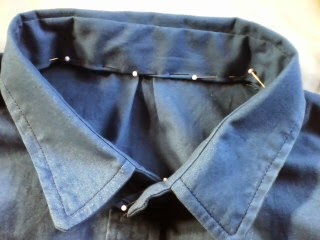 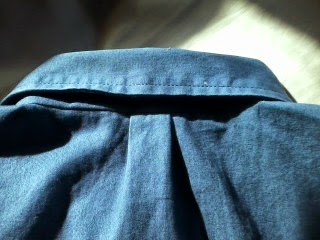 When attaching my band collar I realized the length was a bit off so I created a small tuck on the back neck. This kind of tuck is usually used beneath a yoke but was my only option since the band matched the length needed for the collar. 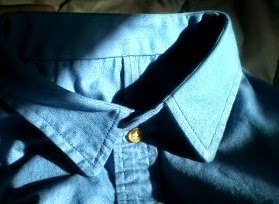 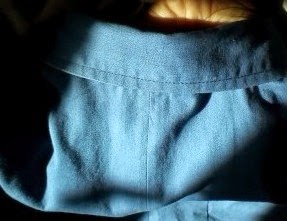 Update: After trying this on I didn't like the way the area puffed up under the collar. I removed the stitching from that collar section and instead created a faux center back seam by taking 1/2" out of the back width tapering down to 1/4" at the hem.

Would you sew it again? Would you recommend it to others? Yes, after I adapt the center back pattern piece for less width and extend the side darts a bit more for shaping. I was pleasantly surprised that no easing was needed when inserting the sleeves, very impressive drafting. 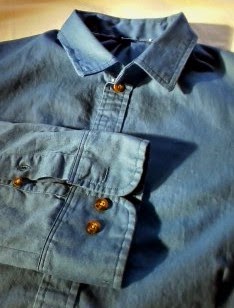 Conclusion: I love that I was able to refashion this shirt and retain all of the detail of the button plackets and topstitching detail. The shirt was quick and easy to make because of this but the fit is due to the Sew U pattern and I will make more of these, even from scratch!

* Unfortunately, most of my pictures were over exposed and none captured the true color.
Written by lsaspacey at Thursday, November 20, 2014 1 comment: 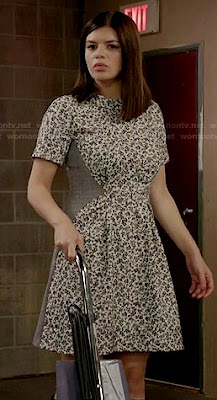 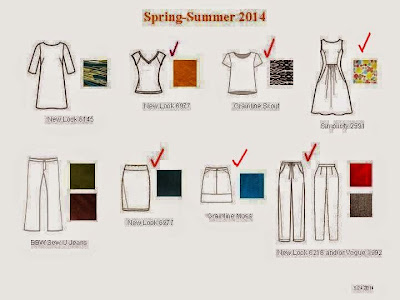 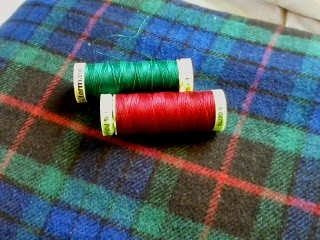 *If you are not already on the Party Down fun train, click on the name to watch it free on Hulu.
Written by lsaspacey at Monday, November 03, 2014 No comments: