Three Greats, Shot By A Fourth

I am still on break but wanted to give you something pretty to look at: 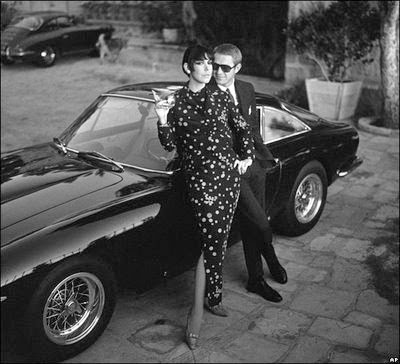 Actor Steve McQueen and model Peggy Moffit-Claxton looking fabulous in a photograph by the late great William Claxton. The third great, the car, was McQueen's own 1963 Ferrari 250 GT Berlinetta Lusso...also fabulous!
Written by lsaspacey at Tuesday, August 31, 2010 No comments:

Note: I'm posting again because I don't want anyone else to miss out on this opportunity. The following WILL happen and will probably be my first post after I get back from break.

UPDATE: Bought my tickets! This IS going to happen!

I've been a bit mad at myself because I couldn't attend (no $) the Golden Age of Couture exhibit at Nashville's Frist Center with Gertie and the gang, but I think I found something to appease myself: 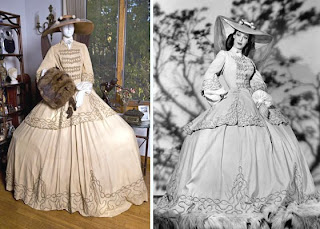 This exhibit is still up and runs through September 5, 2010 at the James A. Michener Art Museum in Doylestown, PA. Tickets are only $10 and I can drive to Pennsylvania!!

"This exhibit features the fashions and accessories worn by luminous film stars such as Elizabeth Taylor, Errol Flynn, Audrey Hepburn, Warren Beatty, Barbara Stanwyck (!), Gene Kelly, Loretta Young, Arnold Schwarzenegger and many others. More than 50 costumes and objects present the still-influential designs of celebrated fashion designers, from the 1940s through the 1990s, including Edith Head, Adrian, Walter Plunkett, Orry-Kelly (!), Bob Mackie and others of legendary renown. Drawn, in part, from numerous films that were nominated for an Academy Award for Best Costume, six of them took the Oscar home" 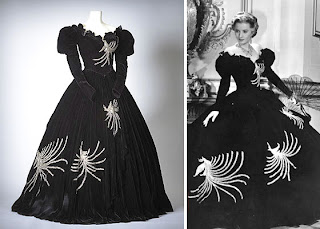 I found out about this from a fascinating blog, Worn Through, which covers fashion from an academic perspective. Go check it out!

Thanks everybody for the beautiful words about my Good 'N Plenty dress! I was so overwhelmed and touched by how many of you decided to comment to let me know you liked it. Lately, I wondered if anyone was even reading this site. I definitely suggest you all make yourselves one as it really was easy, even though I dragged my feet on mine.

I am finishing up one last wardrobe item and then I'm clearing up my sewing/craft area for a while. I don't like how sewing has become just another thing on my seemingly endless to-do list instead of being something I can't wait to get home to do. So, I'm taking a break. I'll also be taking a break from this blog and from SHELTERhome. I need to devote myself to another higher priority task which involves making more money so that I can pay some bills. I think I was using sewing, blogging, and reading blogs as an excuse sometimes. A very flimsy excuse, at that. 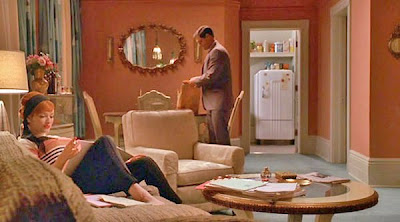 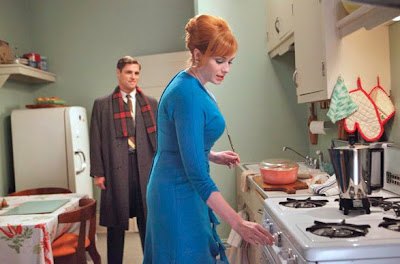 So, I have one last post here (maybe next week) and there is a doozy of a post that I just put up here. If you like the mid-century set decor of Mad Men, how about looking at my break-down of the one set that has not received any Internet love until now...I present to you the very feminine and put together home of young married couple Joan and Greg Harris. How no one else has written about this little jewel box of an apartment beats me. I hope you will enjoy the time and research that I put into it.

By the way, it is my third breakdown of a female TV characters' home, check out my other posts on Mary Richards and Monica Geller-Bing.

Take care, and I hope you'll be around in a month or so for my return because I have some great projects planned on the horizon.
Wish me luck!
Written by lsaspacey at Friday, August 13, 2010 5 comments:

a.k.a. the Good & Plenty shift dress.

Since I had this lovely fabric* from Kyle I decided to use it for the one-hour dress project available here on the Craft Stylish site. It is also available in the Spring 2010 issue of Sew Stylish.

Ha, this "one-hour" dress took me a week to sew and then a couple more weeks to post! But that's just me because this was incredibly easy to make.

Before sewing the pleats down I wore the dress to work with a makeshift belt just to see what I thought. After that successful run, I choose a more ordered arrangement for my shoulder pleats than the more free-formed approach in the magazine.

Close-ups of the finished shoulder pleats: 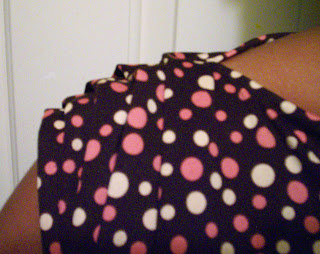 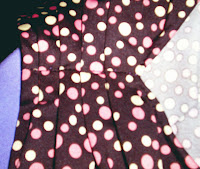 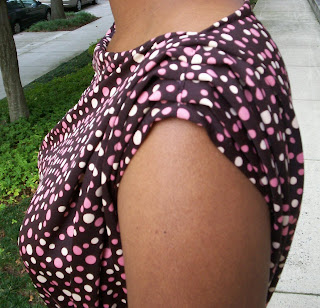 What I changed or "how to make your dress better": 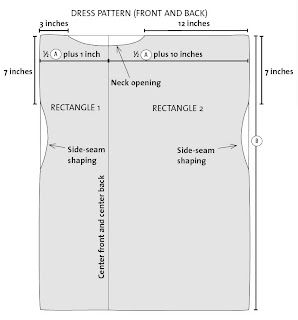 I only added 10 extra inches to the draped side of the pattern instead of the 12" they suggested because I wanted my dress to be slimmer. That is a measurement you might want to play with also.

The pattern has you use 7" for the armhole measurement. I suggest you measure your own upper arm and add 1/2" to that measurement. Mine are bordering on too tight.Measure the width of your own shoulders, calculate the width of your desired neckline and substitute those numbers for theirs. Otherwise, the neck may be too small to go over your head or too wide to stay on your shoulders. 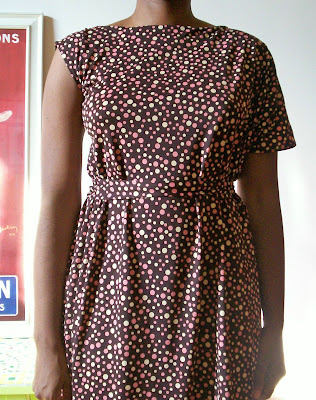 In this picture before the shoulder pleats, it reminded me of the Lanvin dress that Tilda Swinton** wore when she won her 2008 Oscar.

* And yes, Kyle I think it IS swimwear fabric, but I don't really care. It feels great (silky smooth) and I know it can survive a rainstorm!
** By the way, Swinton once responded on Charlie Rose that if someone offered her the part of David Bowie in a movie about him, she'd love to play the part...so, someone please get on that quick!
Written by lsaspacey at Wednesday, August 11, 2010 17 comments:

Who Is Tara Lynn?

Okay, okay, tell me if I'm wrong, but have any of you been seeing stories online about model Tara Lynn? 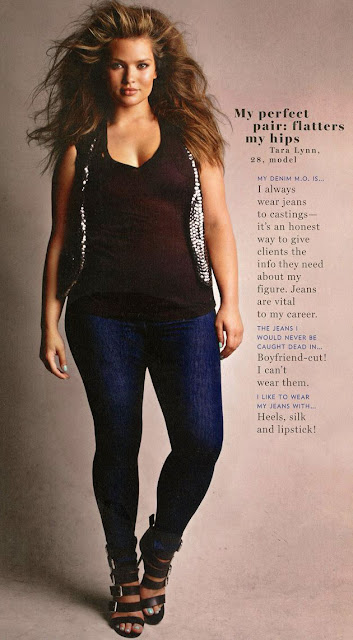 In the August issue of Glamour magazine, I was flipping the pages when my eyes were arrested by a gorgeous woman with fabulous hair and curves. Her name was Tara Lynn and her job title was listed as model. Well, then why haven't I seen her before? Like, a lot, and like, everywhere?

Well, I looked her up on the Internet and low and behold she is out there. I mean, French Elle just did a gorgeous 20-page(!) editorial spread in April with her modeling bathing suits, cocktail dresses, and jeans. I read a lot of blogs about fashion and clothes and surprisingly while I have read about Crystal Renn almost everywhere, I have seen nothing about Tara Lynn? In fact, that Crystal Renn spread from V magazine's size issue that everyone was posting about? Tara Lynn was in that issue too but no one gave her a name.

I do like Crystal Renn, but she's the modeling industry's go-to "plus-size" model even though she's barely considered that according to the non-model U.S. female population. Now, Tara Lynn, while being just as gorgeous is more obviously fuller-figured. If they started using her more, they could shut a lot of these protests down and start to show that they actually believe women are beautiful in all sizes. I mean, this woman is stunning! See for yourself: 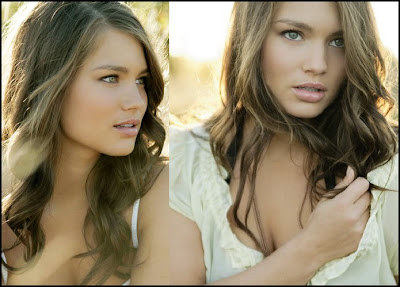 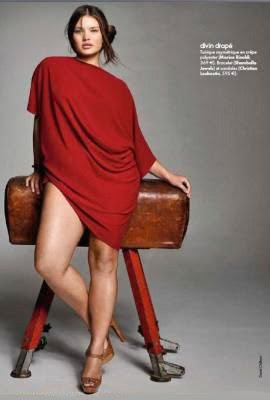 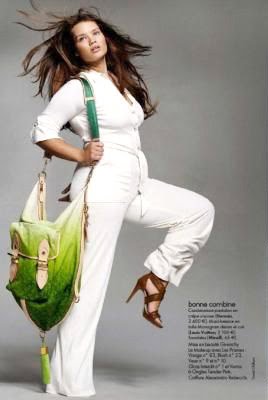 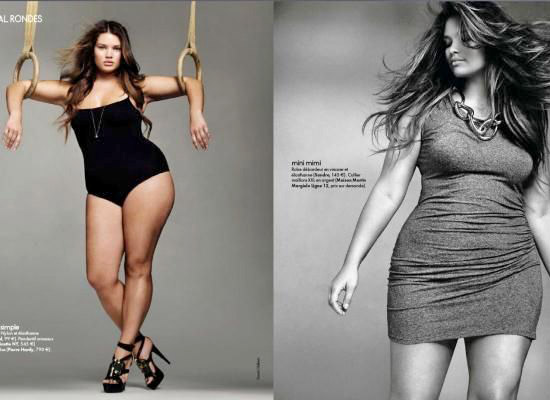 So, I'm throwing down the gauntlet...why don't we all try to find some plus-size models we admire and envy and get their names out there. Up first, Tara Lynn.


If we build it (hype) they (advertisers, editors) will come.

ETSY: Bringing Out My Big Guns...

I love wardrobe patterns, so many possibilities and so much more bang for your buck! I've been saving these lovelies up until closer to fall wardrobe planning season. Here's a sneak peak of what I have in the store: 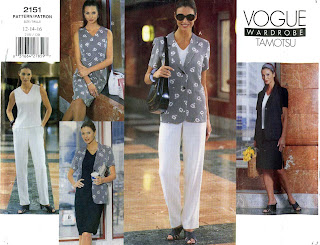 This is a great summer suit wardrobe, I really should have put this one up earlier, right? The truth is I was really thinking of keeping this for myself until I realized I had a very similar pattern for the dress which I could just shorten to make the top. So, my loss is now your gain! 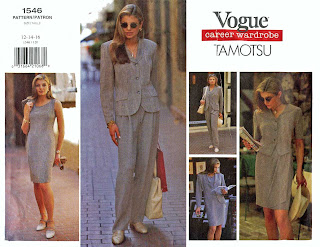 Another Tamotsu pattern. What I've found about this designer's Vogue patterns is that most of the wardrobes were so classic that they can still be worn some 10 to 20 years later. Also do you notice how this jacket with pants remind one of a Georgio Armani-designed suit? Just omit the shoulder pads. 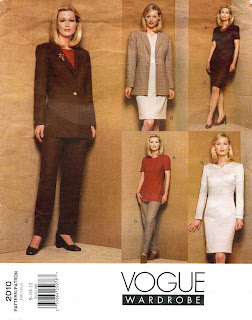 Here's another one I was tempted to keep before I faced the fact I had similar dress and pant patterns. The truth is what I really loved about this wardrobe was the color scheme! Yum! 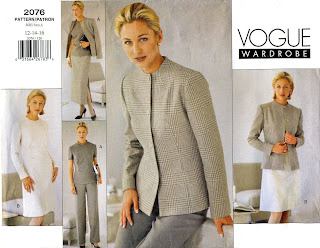 I have always loved this jacket; the color and the cut, and if I believed I would ever make it this one would be a keeper too. I love the darts at the neck and the slightly raised crew neckline.

These Vogue wardrobe patterns and five other lovelies like them are now in my Etsy shop. Uncut and only $5 each. Check around the web and you will see that almost everyone is charging far more for these same patterns. So give my shop a look, you might find something you love.

Books, More Books, and A Queen Among Women

Currently, I am reading a couple of books on fashion, acting, living, and murder.

OK, so the murder is yet another Agatha Christie novel. Did I ever tell you I've read more than 50 of them so far?

The fashion books are on the designers Charles James and Coco Chanel, and one on the history of ready-to-wear fashion in the United States (more on this later).

However, the acting and living are combined in one book, In the Frame: My Life in Words and Pictures, the wonderfully unique memoir of Dame Helen Mirren. Man, I love this woman. So full of life. In a way; even though I've seen her in many performances over the years (especially the UK's Prime Suspect series) I think I've become more a fan of who I think she is as a person than of her acting.

I first experienced her in The Cook, The Thief, His Wife And Her Lover in 1989.* Though I enjoyed the film, I remember many members of the audience left early in disgust, which was funny, because the part that was almost surely expected to disturb viewers was at the very end. Those poor people, never even got to see that...

I've only started reading but I did peek ahead a few pages to view the gorgeous photos taken of her through the years, and see that she spent time on a kibbutz, traveled around the world with a famous acting troupe, romanced actor Liam Neeson, and at one time was named "the Sex Queen of the Royal Shakespeare Company". And none of that covers the fact that she is the foxiest sixty-five year old I have ever seen.

* At that time, I hadn't remembered that she had also been in one of my favorite films, 1981's Excaliber.
Linked film analysis for CTWL from Wonders in the Dark.

Written by lsaspacey at Thursday, August 05, 2010 No comments: