What That Fabric Is For 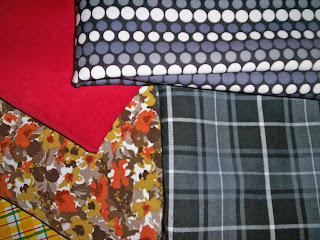 This fabric is destined for a possible fall wardrobe plan consisting of a duster jacket, two retro dresses, and a semi-peasant blouse. The first three fabrics were purchased recently for only $32 dollars! Even at that low a price I still felt guilty. Go figure. The red fabric is not in that total because it was bought over two years ago, so IF it does finally get made into something I'll consider it free. In fact I already used some of it a few years ago to make a red skirt from a TNT pattern so it's cost per wear is low to begin with.

We will see how this wardrobe plan goes because I still have to finish a dress from last year's plan and a top from spring (hopefully this weekend). After that, or at the same time, the next thing I am going to do is follow the steps in my Cal Patch book and make myself some knit t-shirts. I need a lot of them. While I have plenty pants and skirts I don't have enough tops to go with them and I will also need them for layers in winter. So that's a primary concern.

Then the goal is to get out these patterns below (most of them never used) and create a few pieces to supplement what I already have.

I am most excited about this one. It will be my statement piece, a black, grey, and white polka dot moleskin duster jacket. The fabric was originally $29.98(!) but I got 2 yards on sale for $7.49 per yard. It will add some pizazz to my many black items of clothing. Note: must get more white in my wardrobe!


Two fall themed dresses; the black, gray, and white plaid wool version of this dress and a short sleeved, self-belted dress in this vintage-looking autumnal floral (pumpkin blossom peachskin for $4.99 per yard), both to be be worn with cardigans.

View A in red stretch suede but with the front petal-like detail of View C. This plan and fabric have been in the works for two years, so it's about time! 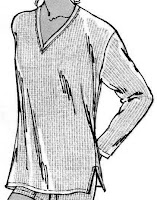 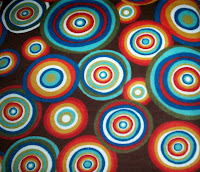 For night time, I will make myself another set from this Kwik Sew pattern, either the sleep shirt or the tank and boxer briefs. My earlier sets no longer fit and they were so easy to make. Isn't that an incredible flannel design (ripple circles for $2.39 per yard)? So not typical of what you'd normally find.

And if I have more time or more motivation:

An interesting cardigan design in brown, rust or purple to add a punch of color to every outfit. I am truly sick of my simple button-down black one, even if it does go with everything. Oops, I spoke to soon, that cardigan seems to be too small now and not warm enough for colder weather.

Possible dreaming for spring:
A pair of jean-styled boot-cut pants constructed from the pattern included in Wendy Mullin's Sew U book. The fabric was bought last year and is a really nice olive green twill with Lycra.

Some full-legged pants using either New Look 6836 (above) or either of these two pants patterns. The Vogue pattern had been made before, in high school I think.


At least one of these twisted tops in knits and/or wovens. When I bought the pattern I had assumed the top was for knits, but no.


So, here's the fun part for you, waiting to see when and if I make any of these as planned. Remember, I have a project left from both last fall and this past spring!
Written by lsaspacey at Friday, October 29, 2010 8 comments:

Look What I Have 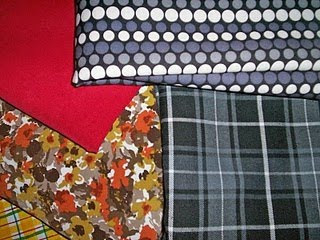 Check Out the New Sherlock Holmes! 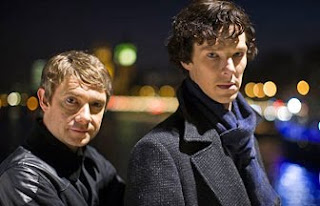 I throughly enjoyed the new version of Sherlock Holmes and Dr. Watson, called simply, Sherlock, on Masterpiece Mystery last night! I had no idea that they were updating the story to present time; texting, internet, and GPS gadgets all included. However, it worked.

Starring Benedict Cumberbatch, (The Last Enemy) and Martin Freeman (The Office UK) as the socially inept detective and his sharp-shooter doc. For a limited time, episodes can be seen online here.
Best line of the show (of which there were many) was when Holmes was described by a colleague as a psychopath. Holmes corrects him by stating, "I'm not a psychopath, Anderson, I'm a high-functioning sociopath. Do your research!"
Co-created by two Doctor Who producers, you know this will not be your grandfather's Sherlock Holmes!
Written by lsaspacey at Monday, October 25, 2010 9 comments:

I fell in love with a brown corduroy coat this weekend. Behold... 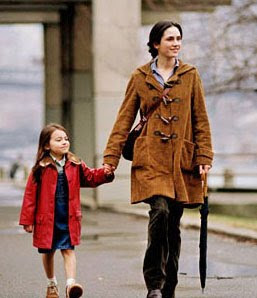 This is Jennifer Connelly's coat in the 2005 movie Dark Water. I got to see this coat over and over again because it was the character's only noteworthy wardrobe item; fall-colored crewneck sweaters and button-down shirts made up the rest. Even though the character is going through some issues, that coat continued to look good throughout the whole thing. 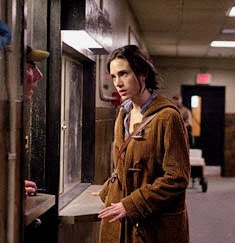 The weird thing is, this type of coat is SO not my normal thing. I have never wanted a toggle coat before (sorry, Paddington!) and though my hooded raincoat has allowed me to forgo an umbrella 75% of the time, hoods are still not my thing. But this hooded coat for some reason had me reaching for a pencil and paper! 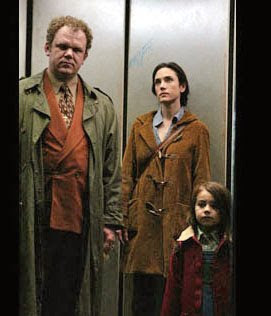 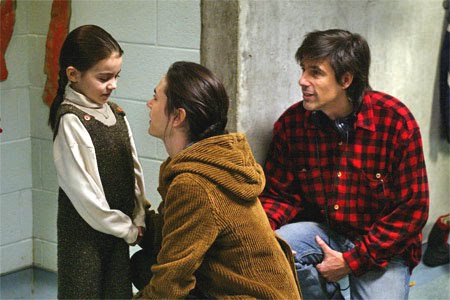 Maybe it's the ease of it, you can just throw it on and go. I would love to see this with a zip-in or snap-in thermal lining so it could go the distance even in colder weather.

I wish I could say better things about the movie, a remake of a Japanese horror film, but it was what it was. Oh, and it had, not one, but three actors from the UK playing Americans or another ethnicity. This is one of my biggest cinematic pet peeves. Tim Roth (English) and Dougray Scott (Scottish) put on some bland US accents, and Pete Postlethwaite (English), played a Russian or Hungarian immigrant with a big shady secret. So, yeah the film had three marks against it in my eyes, from the start.

The Clash at Lucky magazine

Note: I did not buy the magazine so I don't have any pictures from the actual issue. 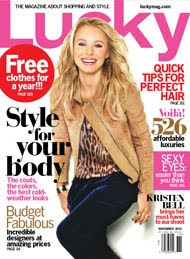 However, I think you should check out "The Clash" spread on pages 172-4 of the November 2010 issue of Lucky magazine. The color combinations are incredible and definitely have me inspired for the fall. Rich blues, reds, purples, rust, brown, and forest greens in simple minimal shapes. But, wow, what an impact!

They show some colors arranged in atonal combinations or placed with their complementary colors as in a blue sweater with a pumpkin orange skirt. For a visual example, you can check out Jill Sander's Spring 2011 collection below and here.

Now, let us hope that the fabric stores got the same memo!
Written by lsaspacey at Friday, October 15, 2010 No comments:

The Power of Glamour 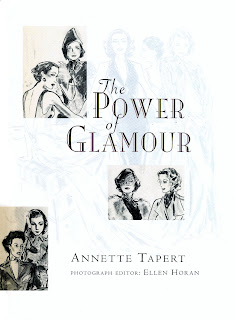 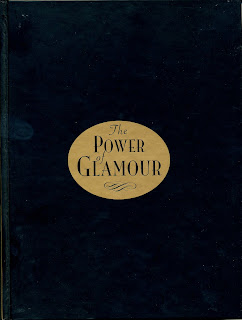 Book jacket and naked bound book
The Power of Glamour: The Women Who Defined the Magic of Stardom by Annette Tapert (1998)

I refer back to this book often. The most important thing I got out of it was how a woman's personality influenced and enhanced her style. These women looked great but also gave off a sense of being comfortable in their clothes and/or bodies. Basically, they knew they looked good.

Another interesting thing I found throughout most of the profiles was that women throughout time have thought they had body flaws and that a great way to disguise the bad and highlight the good was with fashion. Crawford’s shoulders were thought too broad for her slim hips so the shoulders of her gowns and jackets were exaggerated, making them a design choice instead of a body flaw. Claudette Colbert thought her waist was too thick and her neck too short so she insisted designer Travis Banton draw the eye up and away from her perceived flaws by showing as much of her bosom as possible in 1934's pre-code Cleopatra. 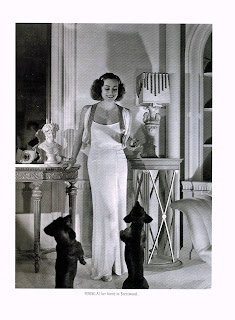 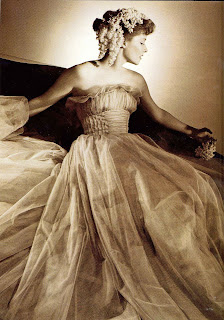 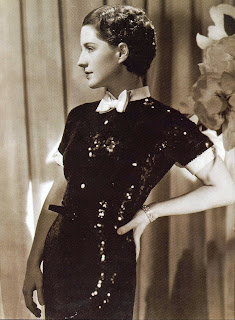 Norma Shearer in one of my favorite outfits from the book

There is also an earlier companion book, The Power of Style: The Women Who Defined the Art of Living Well by Ms. Tapert and Diana Edkins from 1994. It explores the personal styles of fourteen women such as Slim Keith, Babe Paley, Millicent Rogers, and Jacqueline Kennedy Onassis. I can not wait to check that one out too. Lately, I can't seem to stop reading books on vintage fashion and sewing lately.
I highly recommend this book. Enjoy.
Written by lsaspacey at Wednesday, October 13, 2010 No comments:

In the Details: Unusual Pockets

I just can't stop marveling about the details that pattern company designers used to put into their patterns. Perhaps it was a direct pull from designer collections at the time or they were just tasked to be more creative. Whatever the reason, I thank them. Again, like the collar post I wrote awhile ago, these same details can easily be incorporated into our home sewing projects. All that is needed is a little time drafting an appropriate pattern for the pocket and you're done.

Enjoy the images below: 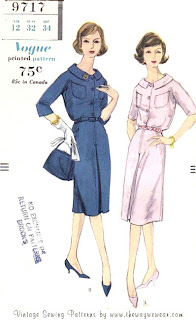 I love how the pocket's shape match the collar's curve. A simple changes to make by using the collar pattern to adjust the shape of your existing pockets. 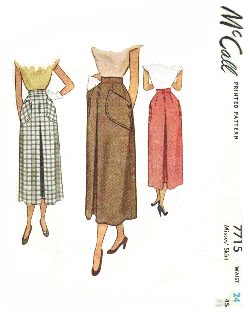 
Another case of altering the shape of the pocket, this one is also moved to overlap the side seam of the skirt. 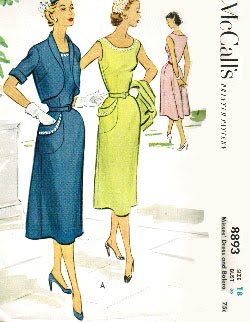 Third time's a charm! Here there is only one pocket. 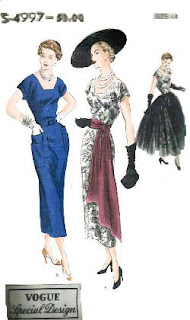 But if one pocket is nice, how about doing it twice? Here you have stacked pockets which remind me of the little coin pocket nestled within a jean pocket. 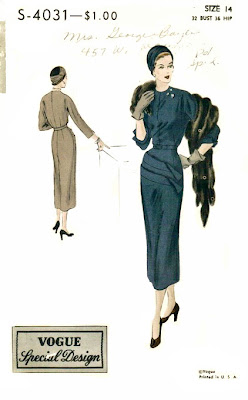 
This one could be the most difficult if is in fact a working pocket. If not, then this would simply involve adding the band detail during construction or later as an embellishment. 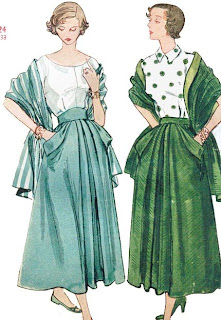 
I am in love with this skirt, I see it in a fluid silk satin. This could simply be a case of basic pocket and an added cuff decoration. 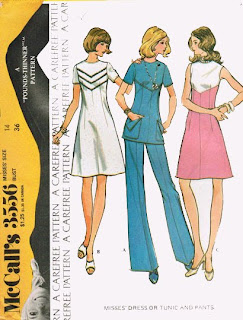 
Similar to a pocket detail in the earlier post, this "lazy" pocket is super simple. 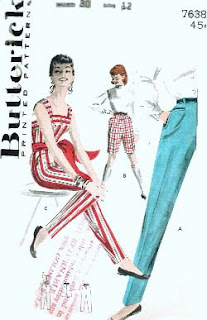 I have no advice on how to create this one but if you have pattern drafting skills you can create it yourself. All others, just admire the shape. 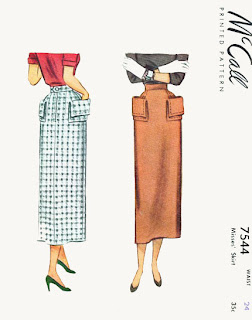 
A cousin to the "lazy" pockets, this one is extremely lethargic and involves falling down half it's height and hanging loose. I also salute those girls for not being afraid to add width to the hips for the sake of fashion.