A Change In Plans


Due to circumstances that were unfortunately under my lame control, my life is about to change.  Hopefully for the better.

I am leaving Richmond and moving back to my hometown.  I'm sure long-time readers have noticed an underlying theme running through this blog for a long while, the fact that there were many things I had to deny myself because I lacked the money.  I have some financial issues to clear up as I have been running on fumes for quite a while.  For the last five years I found myself in a job that was meant to have been temporary, which I took to gain experience but for very little money.  At some point, I lost the motivation and confidence to move on and get a job that fully utilized my skills and challenged me.  School loan payments, medical bills, and the misguided notion of living alone drained my resources and filled me with constant stress.  So my goal is to not only pay off debt but to shore up my confidence, and improve my allover health.

So wish me luck.  Actual sewing by me will be sporadic but what else is new?  I have many (oh so many) draft posts on fashion and style to publish on this blog, so don't go anywhere. I actually have two finished items to show you but packing has gotten in the way of photo shoots and one of the projects is still embargoed.  I do hope to make it back for the Hollywood Costume exhibit at the Virginia Museum of Fine Arts in November since I'll only be 90-some miles away, so perhaps I'll see a few of you there?
Written by lsaspacey at Friday, October 25, 2013 16 comments:

This May Be The Lavender Dress Of My Dreams

In an earlier post, I wrote how I was having a craving for a lavender or periwinkle blue dress.  Some time after that I saw a video of a Florence + the Machine performance where Florence wore the most beautiful and expertly fitted dress in a very similar color.﻿  The dress had a very strong 1930's feel which made it all the better in my mind.
﻿﻿
﻿
﻿I could not find any identifying information for who designed the dress but after some research (perhaps too much time was devoted to this task...) I believe this dress to be a Valentino from the 2011 collections, because 1) Florence has worn Valentino before and had attended the 2011 Pre-fall collection as an invited guest and 2) the style and coloring matches that of items within that same Valentino collection.  I hate the fact that I can't find any confirmation of this.  Almost all of her other performance outfits are sourced somewhere on the Web but not this one.  Arggh.  Why is there no "What Florence Wore" site when there is one for Emma from Glee? 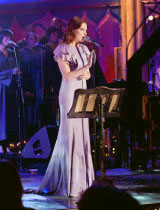 This is the only picture I could find to get an idea of the skirt's sweep.  It reveals a slight train in the back with the fullness flowing down from a form-fitting silhouette at waist and hips.

This picture reveals the many seam lines of the dress.  There are four tucks released right underneath the bust; two to each side, that shape the waist and then meet another seam coming from atop the hip bone that leads down and meet directly in the middle of the body. 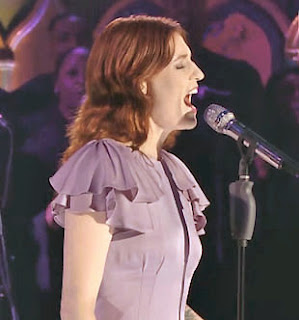 The flutter sleeves, clearly referencing the 1930-40's emphasis on the shoulders, are layered atop one another with the upper tier larger in width and placed nearer the dress center than the lower one.  Both seem to be placed in order to droop down the arm rather than hang level or extend out (see below). 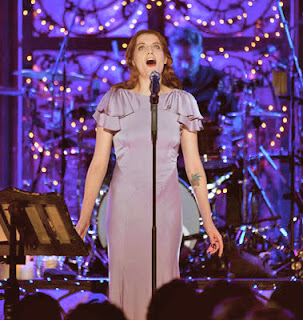 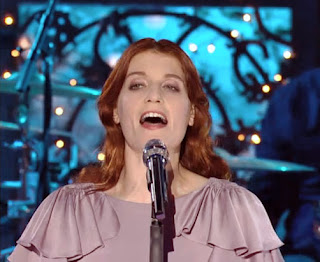 This picture reveals how the sleeves seem to be ruched at the top, perhaps even smocked at the shoulder, resembling epaulets which is reminiscent of the 1940s military-influenced styles.  The bodice is then fashioned with a simple bateau neckline.
﻿﻿﻿﻿
Looking through my files and pins of 1930's dresses I found a few images that incorporate similar sleeves: 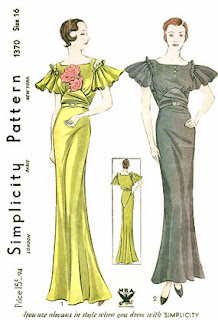 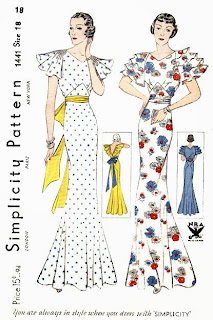 I am also aware of two FREE patterns that could be used to create the body portion of the dress.  However, for practicality and more opportunities to wear I would hem this dress just under the knee or at mid-calf length for period authenticity. The Your Style Rocks' Eva pattern would look lovely in a silk stretch jersey, crepe, or charmeuse and so would the Vera Venus Little Bias Dress made up in a silky woven placed on the bias.

Photos By: PictureGroup
Written by lsaspacey at Saturday, October 12, 2013 3 comments:

Quick Draw and TV on the Internet

I have become pretty obsessed with watching Internet program providers like Netflix and Hulu. Every night I have to remind myself that I still own a TV set. For example, even though I'm a huge fan of ABC's Scandal I had a hard time pausing a new program to watch the season premiere. That's big.

That program was Hulu's original series, Quick Draw. Please check it out, it's awesome. It's in the vein of similar late 1800s-set series The Wild Wild West (1965), The Adventures of Brisco County, Jr. (1993) and futuristic Firefly (2002) set in 2517; Westerns combined with elements from Bond-like spy thrillers, steampunk, or sci-fi.

In addition to the episodes being created completely from improvisation, the show has its own drinking game based on an authentic recipe book of saloon drinks. Separate 2-minute videos instruct how to concoct the drinks (with names such as Whiskey Cobbler, Gin and Pine) and then provide a "word-to-drink-by" for each specific episode.

Miranda, starring Miranda Hart (Chummy from Call The Midwife)
Moone Boy, written by and starring Chris O'Dowd of The IT Crowd and Bridesmaids
Written by lsaspacey at Monday, October 07, 2013 2 comments: