It has always been Peggy, NOT Joan, Betty, or Megan who has been my fashion muse on Mad Men. 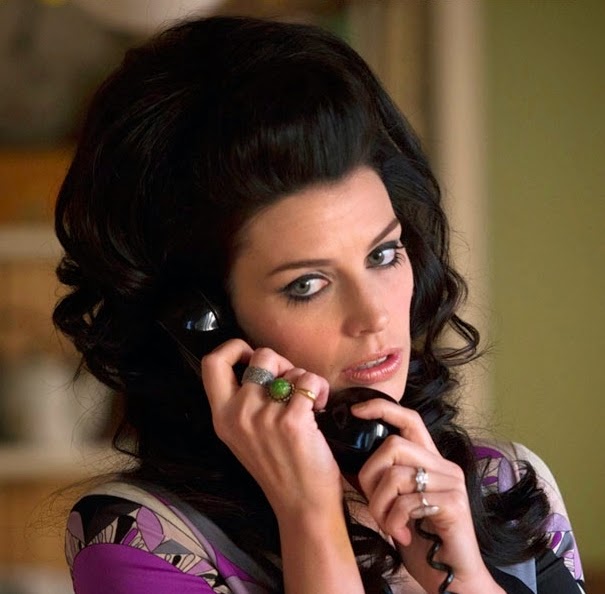 I have never been a fan of Betty's "too perfect to muss up" look. Joan has had many an outfit that I've loved but the majority would not be comfortable to wear on a daily basis. Megan is too much of a poseur to me. Just notice how different her at-home look (comfy sweaters and Capris) is from her "when seen by others" looks when everything is amplified and false (as in hair, eyelashes, and rhinestones). Oh, no. 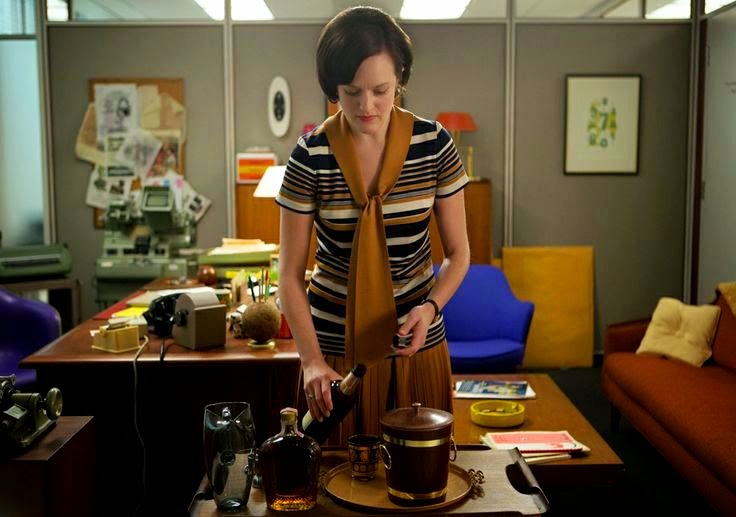 Ms. Peggy Olson is more of a "what you see is what you get" girl. Well, except for that time she spent teasing Ted Chaough in her peek-a-boo black and hot pink chiffon mini-dress. I personally thought that outfit looked more like a negligee and not her best look.

While I am also not a fan of her plaid and knee sock schoolgirl looks, when she is in her career woman togs I can definitely follow her lead. Here are some recent favorites, with a few outfits from this past half-season of Mad Men: 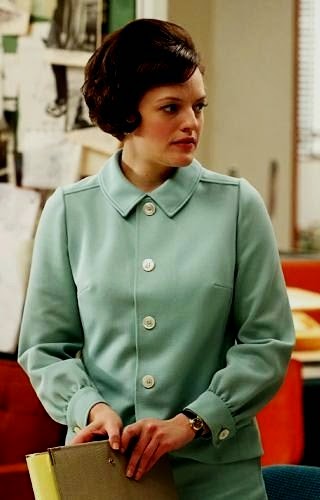 I love the mix of red polka-dots and stripes with white, especially combined with the black skirt. 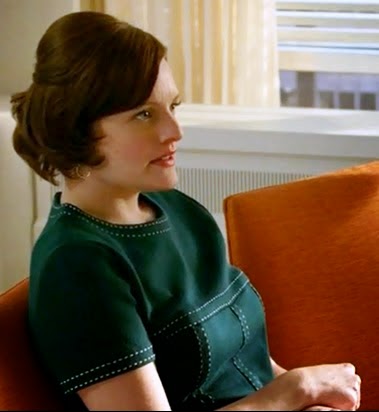 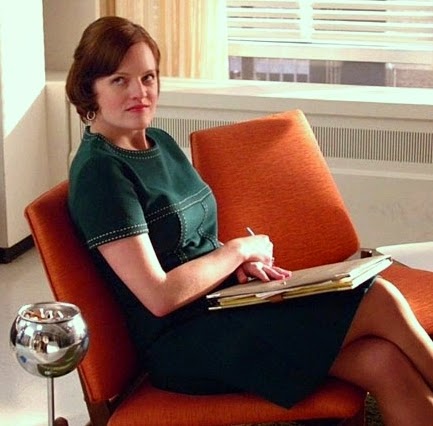 This green double knit dress with decorative trimming has actually inspired an item in my future wardrobe. You will hear and see more about it in the coming months. 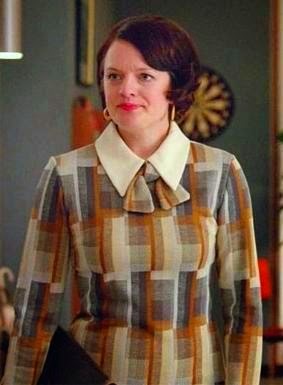 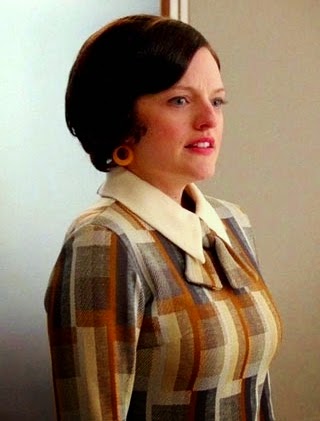 
This fabric is amazing! Where, oh where can I find a print like this one now?


Loving this dress, the colors are so perfect that they match her office! 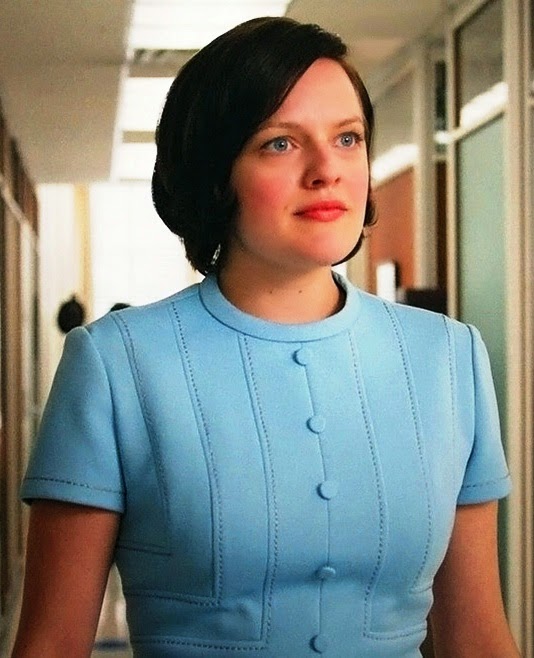 This is my favorite Peggy outfit of all time. I would wear this tomorrow in a heartbeat. All that parallel top stitching on the top and skirt. Simply lovely.

I can't wait to see what is coming in the second half of the final season. Just a year to go. Since they're filming right now, costume designer Janie Bryant must be stressing out at leaving this job behind. When will she next get to work on such an influential period costume drama again?
Images: AMC via Tom and Lorenzo.
Written by lsaspacey at Thursday, June 26, 2014 1 comment:

I finished the waistband and took some more pictures for reference. I think I'm ready to cut out the fashion fabric. What do you think? 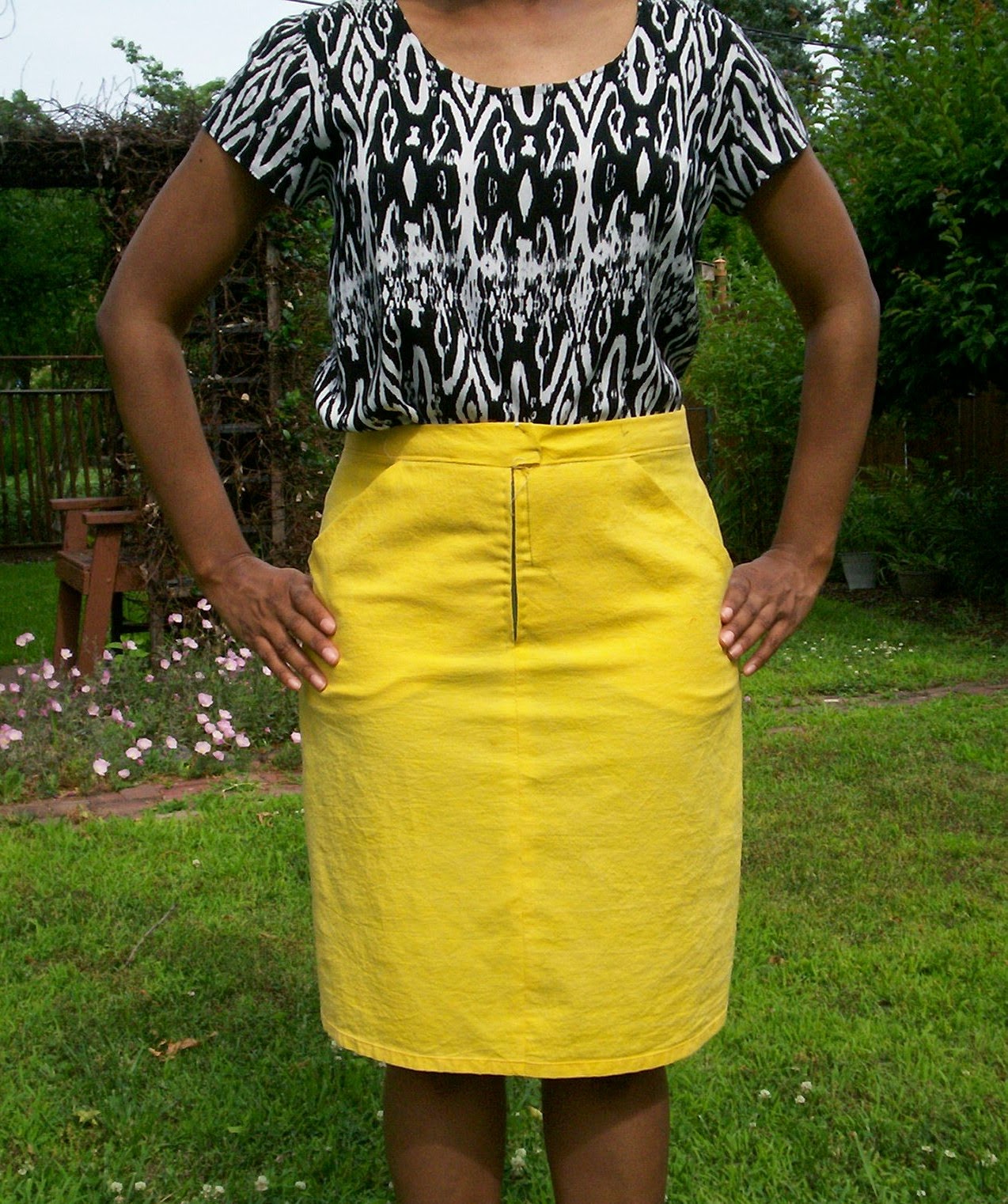 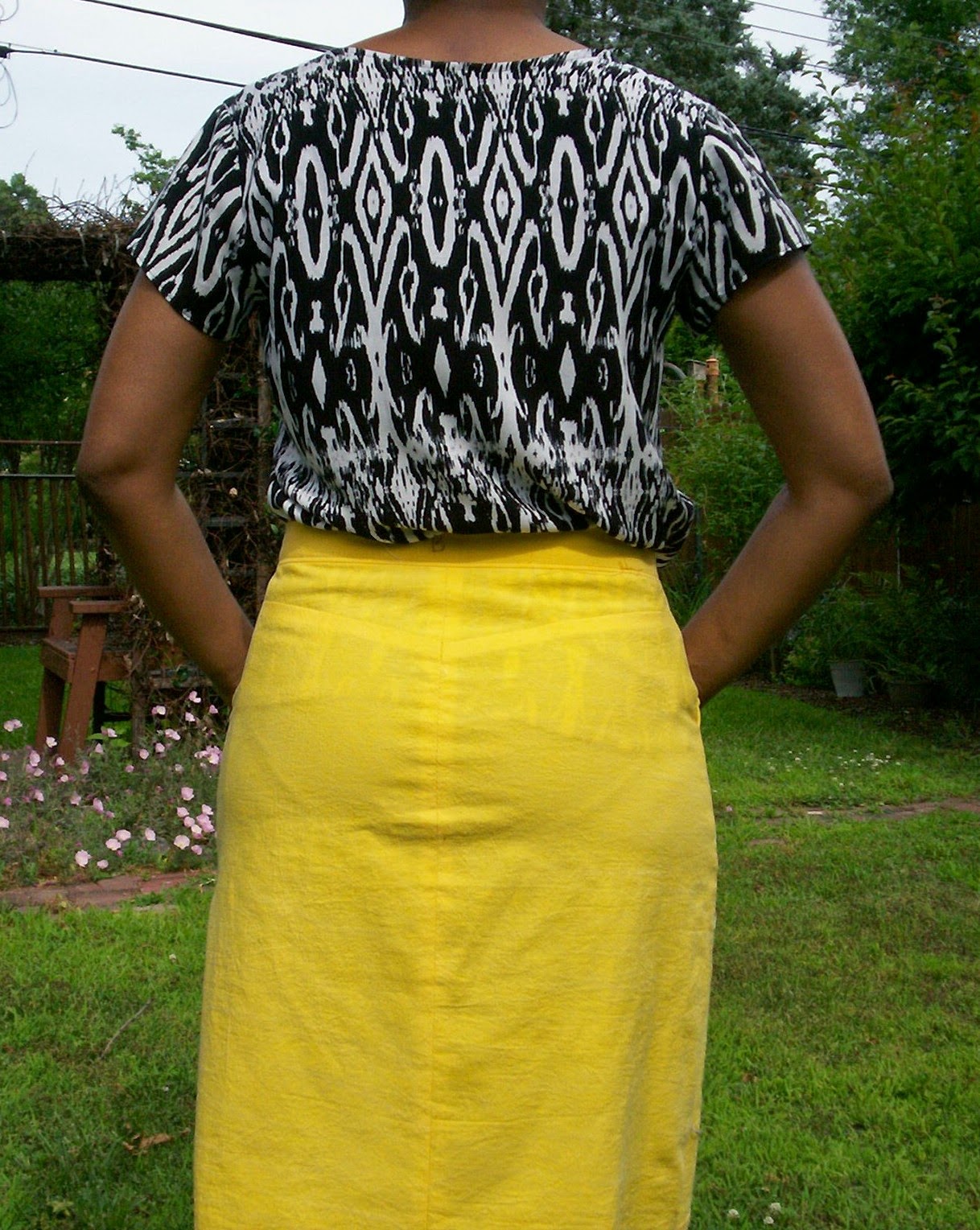 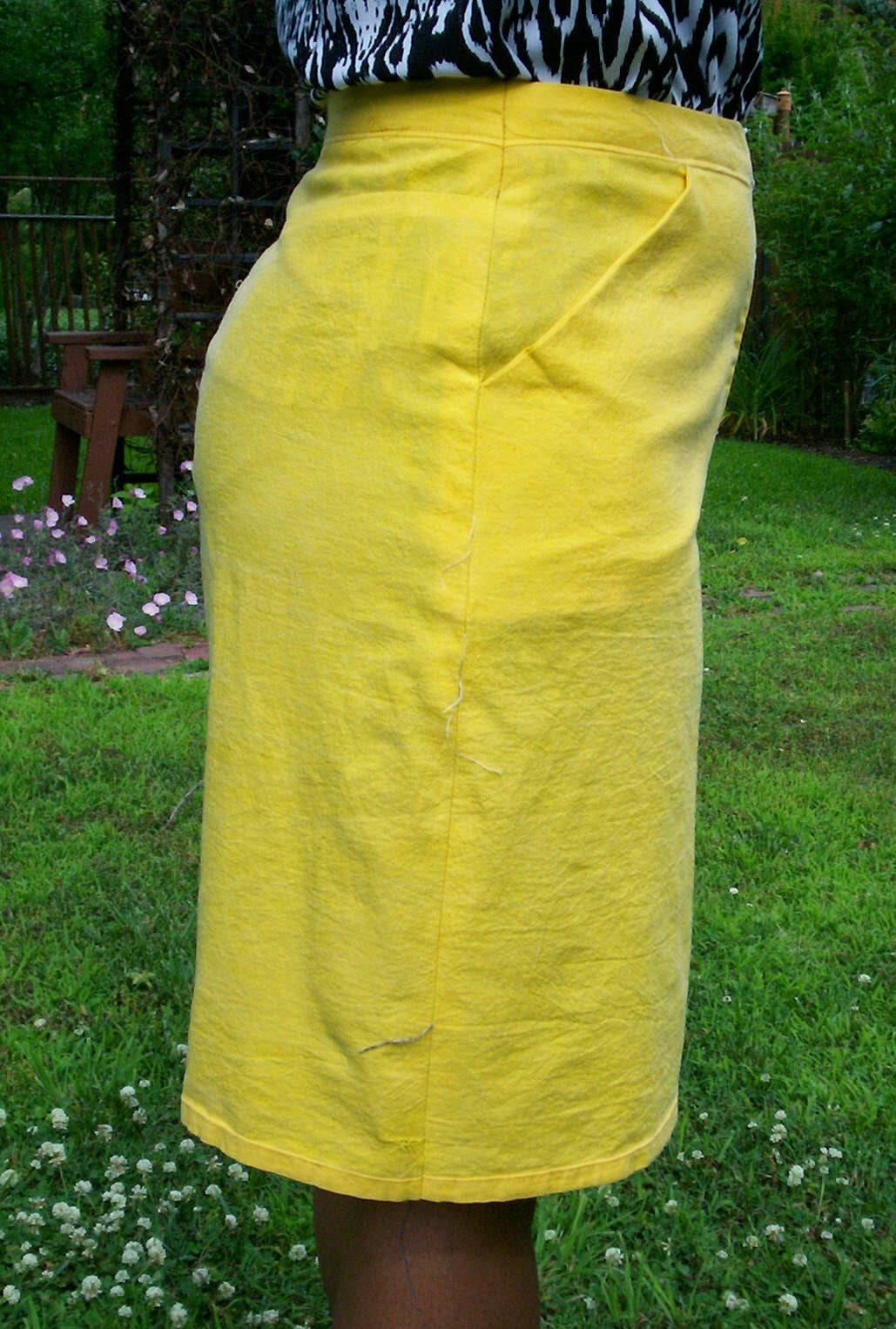 There is that small hiccup in the back yoke but I think it will be fine in the denim, I had problems with this cotton stretching a bit when I was sewing it and that might be the result.

Messing With My Moss Muslin Part 1
More On My Moss Muslin, Part 2
Making New Muslin For My Moss, Part 3
Written by lsaspacey at Wednesday, June 11, 2014 2 comments: 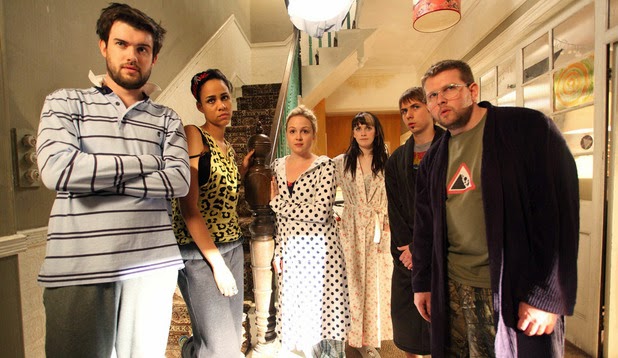 *Hulu's vast selection of British situation comedies and dramas that are FREE to view. I have been binge-watching one after another. Right now, I am watching Fresh Meat about uni (college) students in group housing. It has some great laughs, some great characters (Vod, Howard, Sabine) but its rampant promiscuity or lack of awareness when in comes to sex kicks off my "old woman on porch'" or the GET OFF MY LAWN! genes. The story has a "will they, won't they" couple who can not stop sleeping with other people. Arrgggh!


*Heather's hilarious recaps of "I Want To Marry Harry" (she watches - so I don't have to!) on GoFugYourself.com. Besides her observations on some of the most clueless American women, she also points out signs that the show is produced very cheaply despite having to portray the lifestyle of someone who is fourth in line for the crown of England! Her recaps are so good, I'm sometimes tempted to actually watch the show. Not.


*Library books to read, if I can ever stop watching Hulu:

The Truth About Style by Stacy London of  TLC's "What Not To Wear"
Grace: A Memoir by Grace Coddington, the creative director of Vogue magazine.
The Opposite of Fate by Amy Tan (a non-fiction book about her life before and after The Joy Luck Club).\

*The most gorgeous coconut shell handbag for $40 seen for sale at a Cracker Barrel restaurant, of all places! The purse (# 453805) isn't on their website anymore but you can see a similar coconut bead belt they sell here. I have never seen a handbag in person and wanted it like this. Ever. In a magazine spread yes, but never in a store. Except for the cloth ones I've made, my purses were all gifts. I've bought briefcase-like bags and totes but never a pretty handbag for myself. This one had short enough straps that it could be worn on the shoulder and nestles up under the arm perfectly, it was the perfect size.  I just got a job but I have no justification for buying it and really nowhere to wear it. Man, it was beautiful! Update: Weeks later, it went on sale...I bought it.
Written by lsaspacey at Monday, June 09, 2014 1 comment:

Making A New Muslin For My Moss - Part 3

Well, when Makes the Things and An Elemental Life decided April would be Moss Making Month, I thought it was about time I revisited my ongoing procrastination project, the Grainline Moss. I have no earthly idea why it's taking me this long to make this skirt, I really don't! Perhaps, I want it so much I'm scared that it won't look like my vision.* I mean, I seriously can't wait to wear this skirt and then make many more of them!
I don't know how well it worked out for everyone else in April but here is the latest muslin/step in my Moss making journey (see bottom of post for links to the other steps): 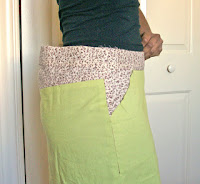 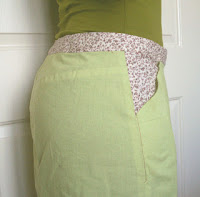 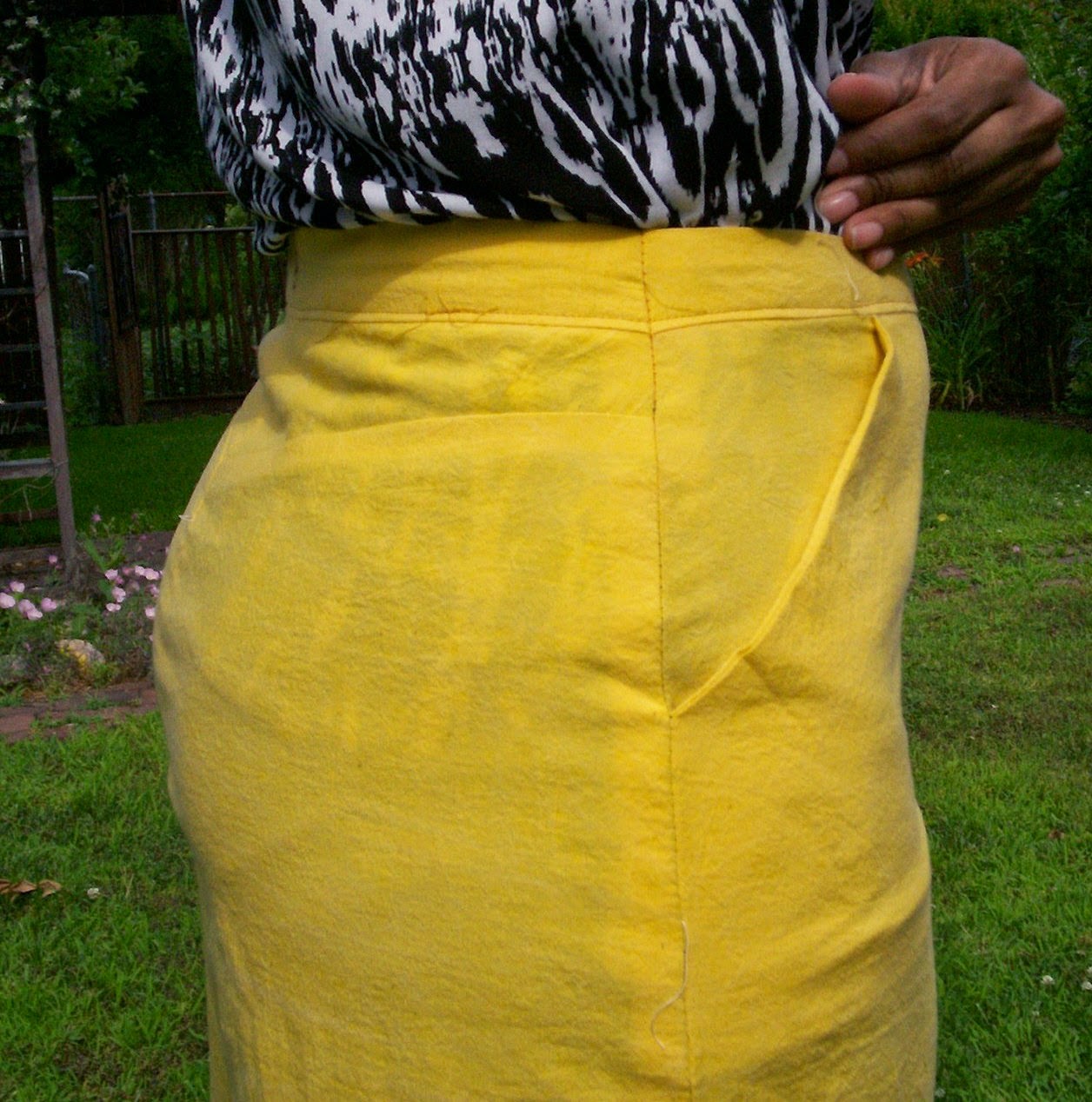 3.
I warn you, this is an extremely long post that does not end with a finished item. However, as you will see, I am getting VERY close. I have now realized that when it comes to my skirts, if it does not have a dart in the back, it will not fit me. Above, see what a little dart can do for fitting and shaping. You can even do it the way I did and get the results of a dart without having a dart visible. In this case, the dart was drafted into the pattern pieces. You can see this technique for a waistband piece illustrated here at the House of Jo blog.
﻿

Ta  da! I actually cut a new muslin (#3) out of a bright yellow linen for what I hope are the last tweaks to this pattern. The goal now is to perfect the waistband to fit the new and customized yoke and skirt. 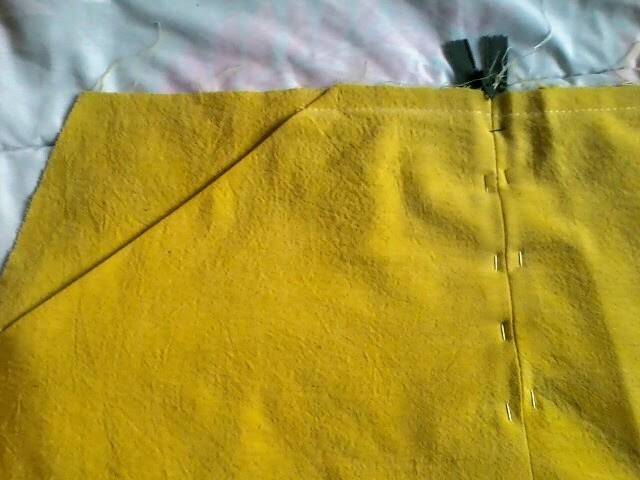 I made a big change to this muslin. If you notice in the picture at the top of the post, the original waist dipped down in the front. It was a little lower than I felt comfortable. Though this is what the designer intended, where it was, the fit of the skirt would be very dependant on the comparative "poof" of my belly and it's many fluctuations. I decided to raise the skirt front 1/2" on all the pertinent pattern pieces, effectively raising the waistband just in the front. 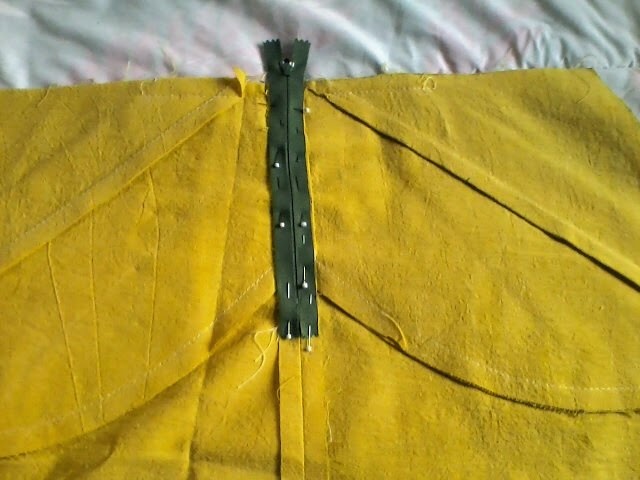 Having altered the yoke in back per Jen's instructions, I chose to follow the example led by Stitching on the Edge's Adrienne and treat my skirt and waistband together as separate front and back skirt units in order to fit and stitch the skirt together at the side seams. That seems to have been the best idea for an accurate fit.

I also measured and added some length to the front waistband sections as some reviewers had said the original was not long enough. I have a few tweaks to make to the front waistband curve still. Update: Perhaps there would be no problem if I had not put the waistband on upside down! Kirsty of Tea and Rainbows talked about this same issue when making her Moss but I still made that mistake.

No wonder it was not fitting tighter at the waist, it should get narrower towards the top! So, now on to the final fabric! Finally.

Where I am now: 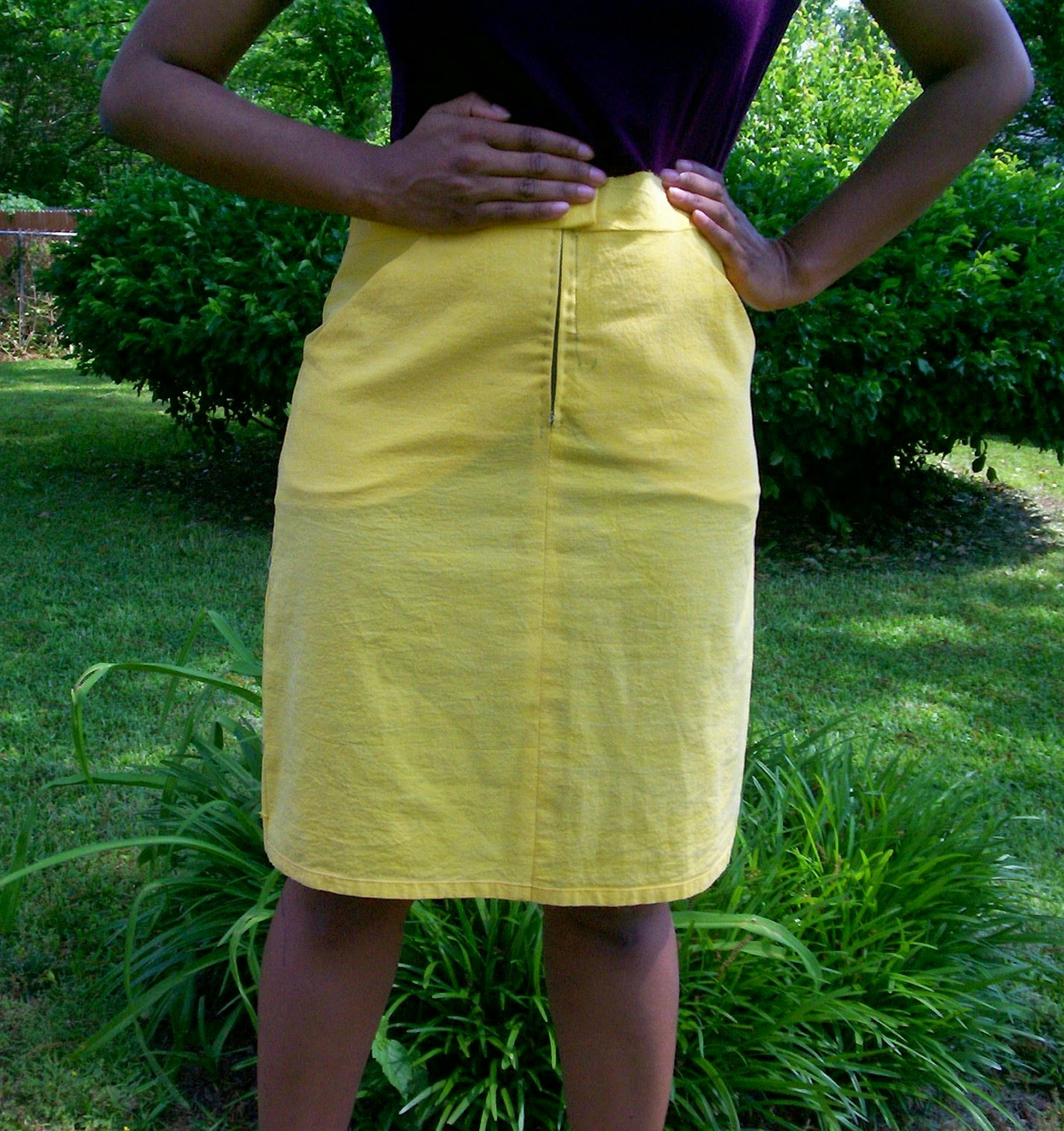 I think the only hiccup was the front section of my waistband. Hopefully, it is now fixed.
﻿﻿

I like the idea that if I were wearing a shirt on top you would have no idea there were any problems at all. If all else fails...
﻿ 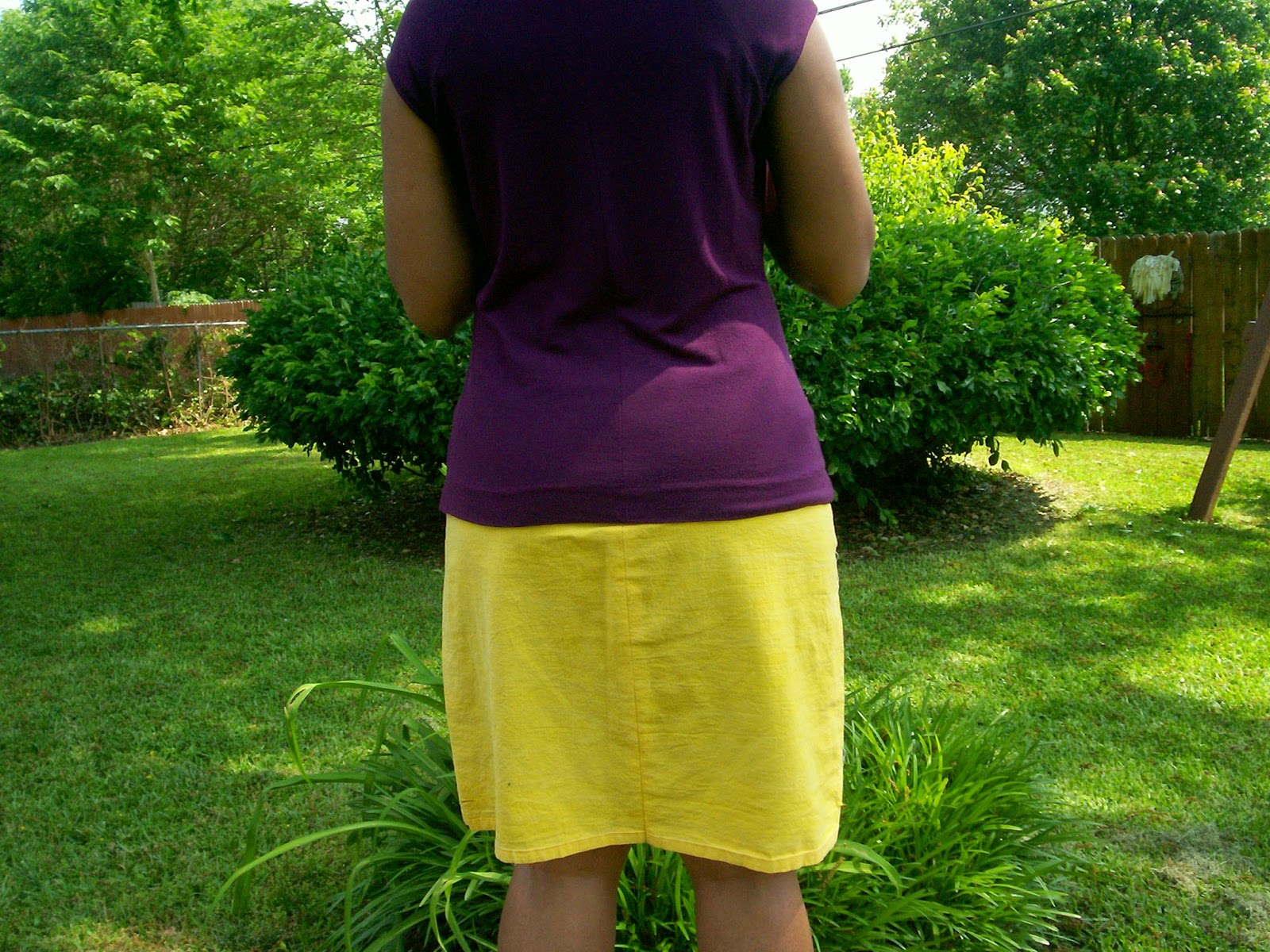 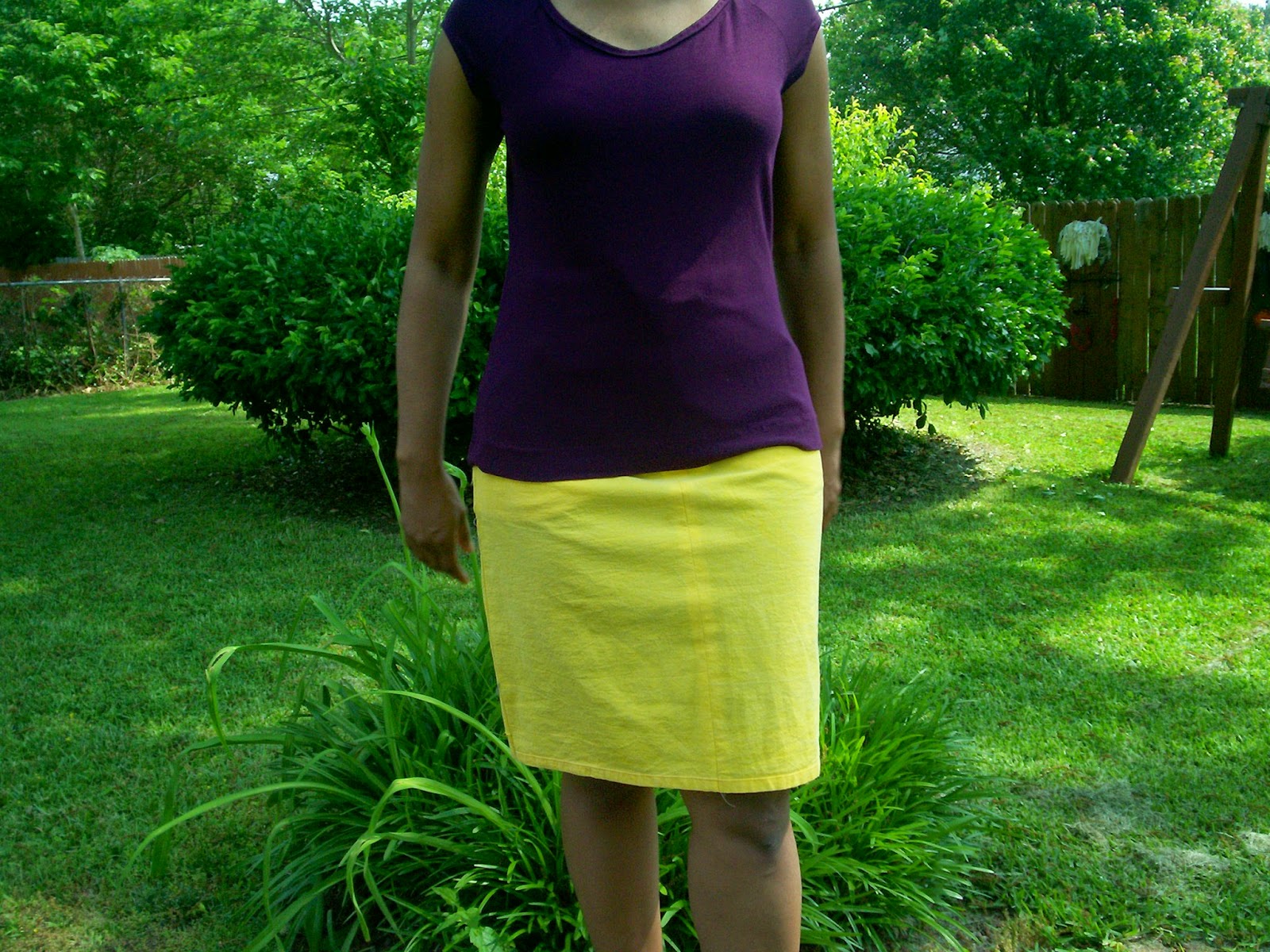 The color in these two pictures is more accurate of this near fluorescent yellow fabric.

*I know that is why I haven't cut into my polka-dot moleskin for my highly desired and wardrobe changing duster coat!
Written by lsaspacey at Friday, June 06, 2014 3 comments:

Did You Have A Happy Three-Day Holiday Last Weekend?

Or as we sewists call it, More Sewing Time?

I had a goal for Memorial Day weekend.

1. Finish up my third Grainline Moss muslin.
2. Cut and sew a Grainline Scout from a new print rayon challis.
3. Cut and sew another New Look 6977 top in a knit remnant from my stash.

Amazingly, I was ahead of myself, I already had a progress post on the Moss muslin written up and a new pattern review of New Look 6216 set to publish Monday.

By the way, behold my updated wardrobe plan: 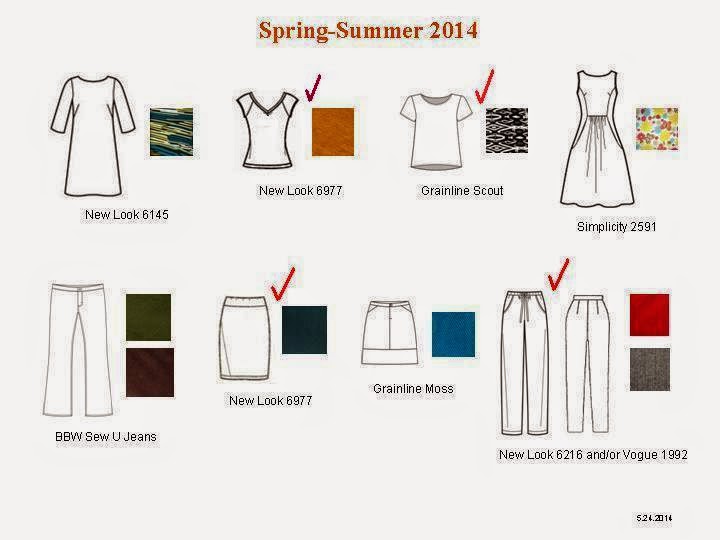 Yes, I know! I changed it...again. I substituted in two new (quick & easy) items but I did finish a project before I did that. With the recent high summer temperatures, working on fitting a knit ponte (!) dress with sleeves and stitching up a moleskin (!) coat just didn't make any sense. I was nearly done with the dress but with nowhere to wear it anytime soon, I will leave finishing it and starting the coat for late summer/early fall.

Best of all, by finishing these two tops this week I am suddenly at a 40% completion rate! 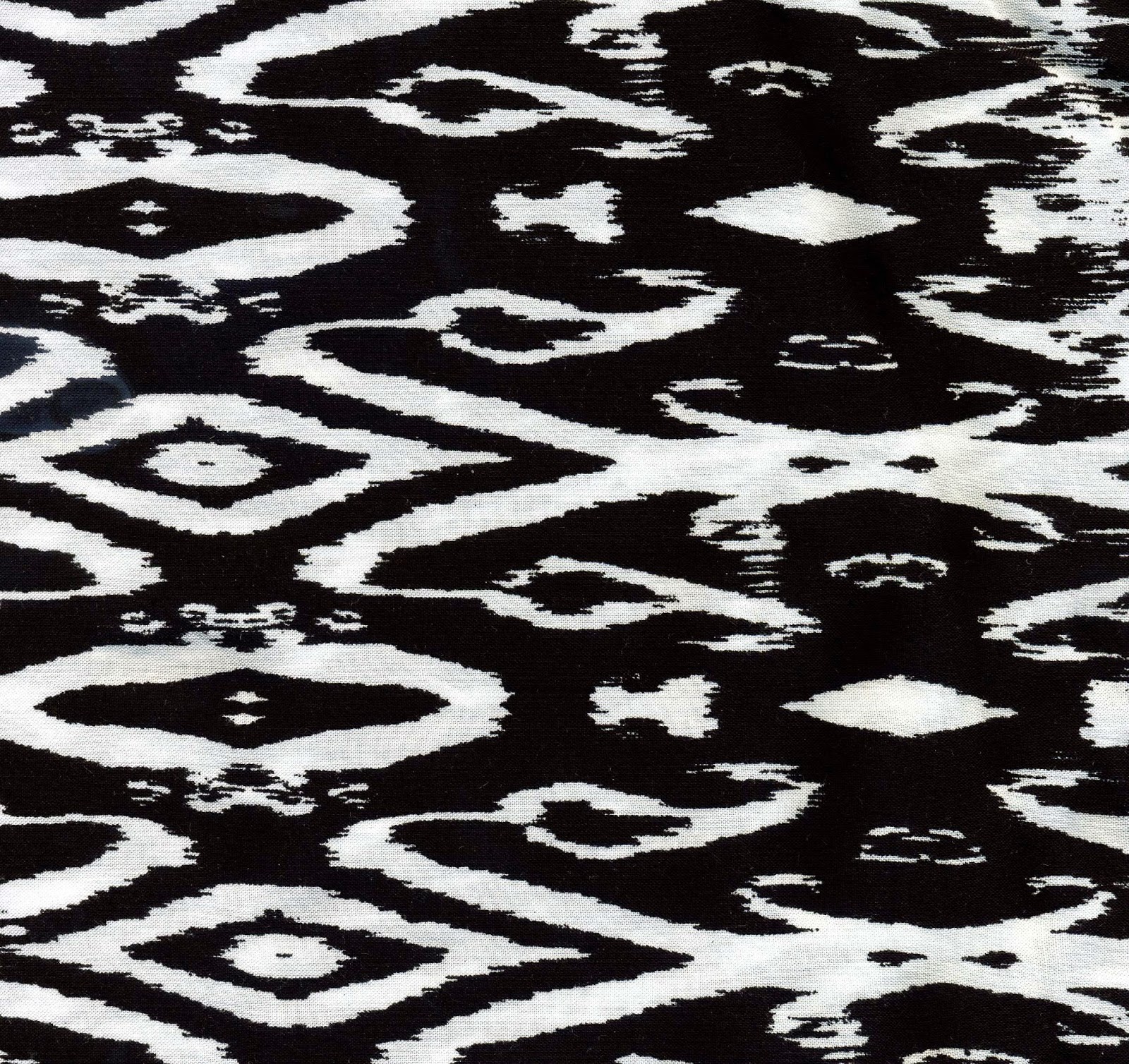 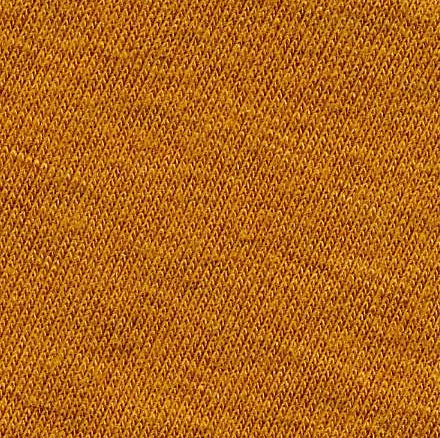 This first fabric is a black & white rayon challis print I bought last Saturday at Jo-anns and was a finished Grainline Scout by Tuesday. 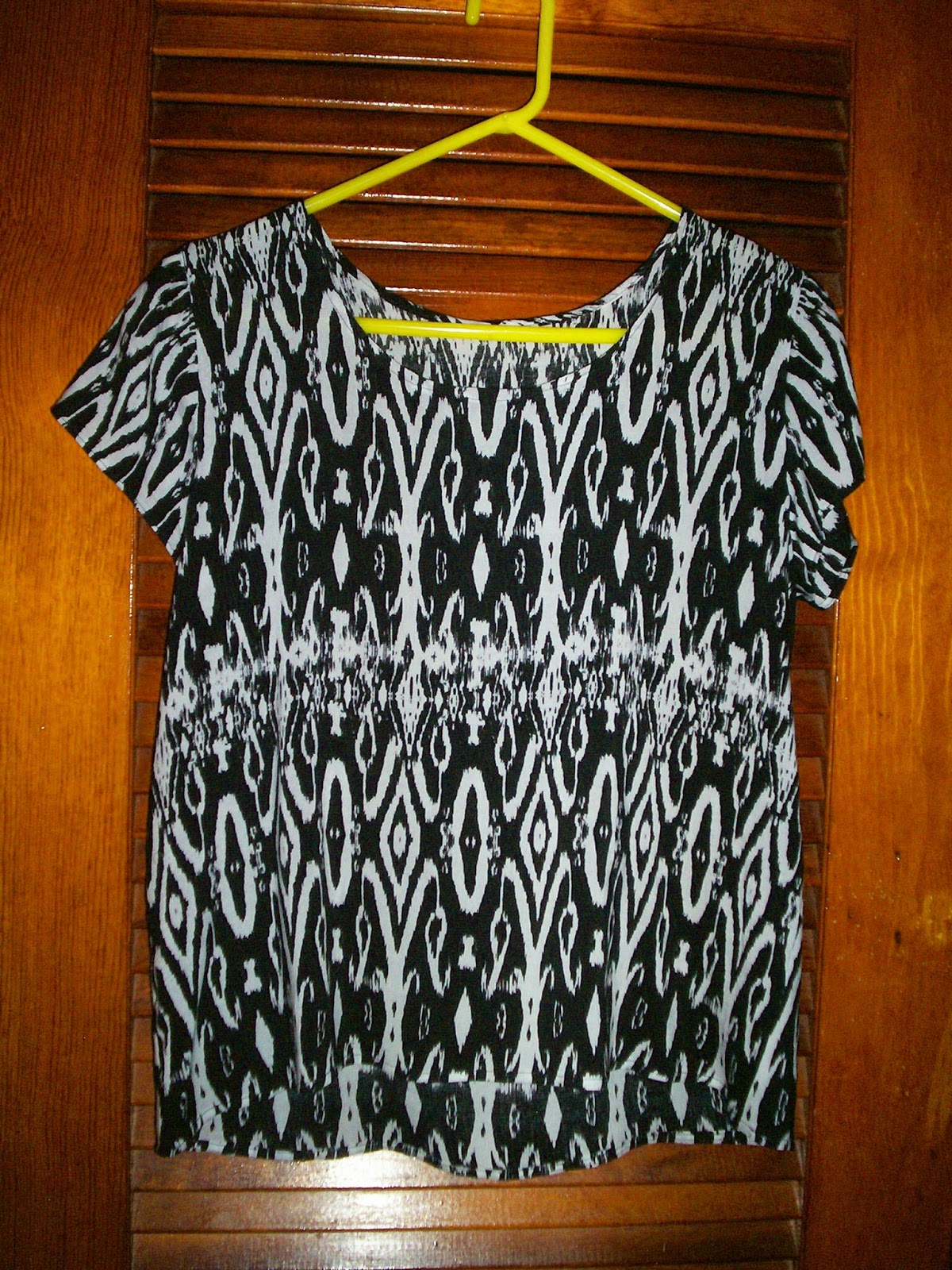 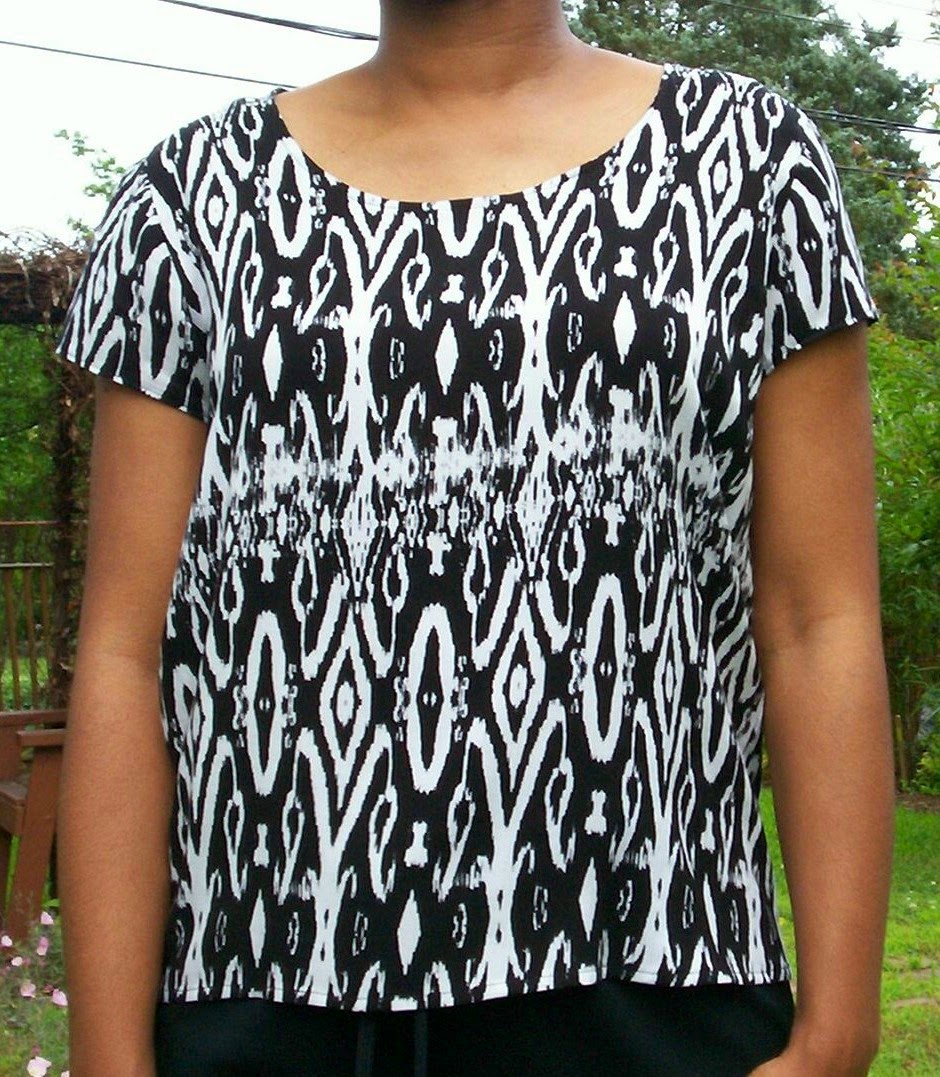 The second fabric, a remnant from my Burdastyle "Let's Twist Again..." top, was made into a New Look 6977 top by Friday. Aren't TNT patterns the best? 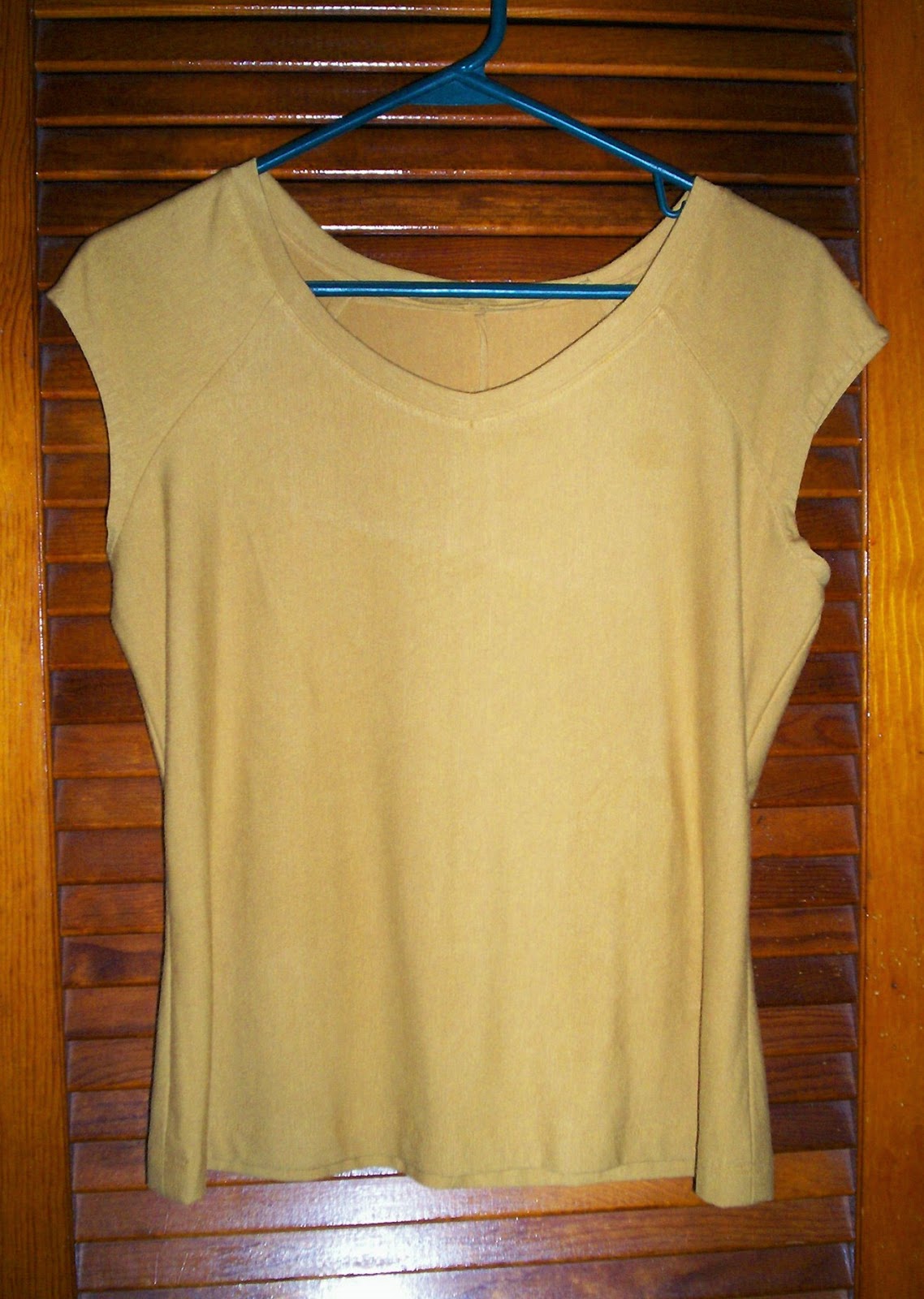 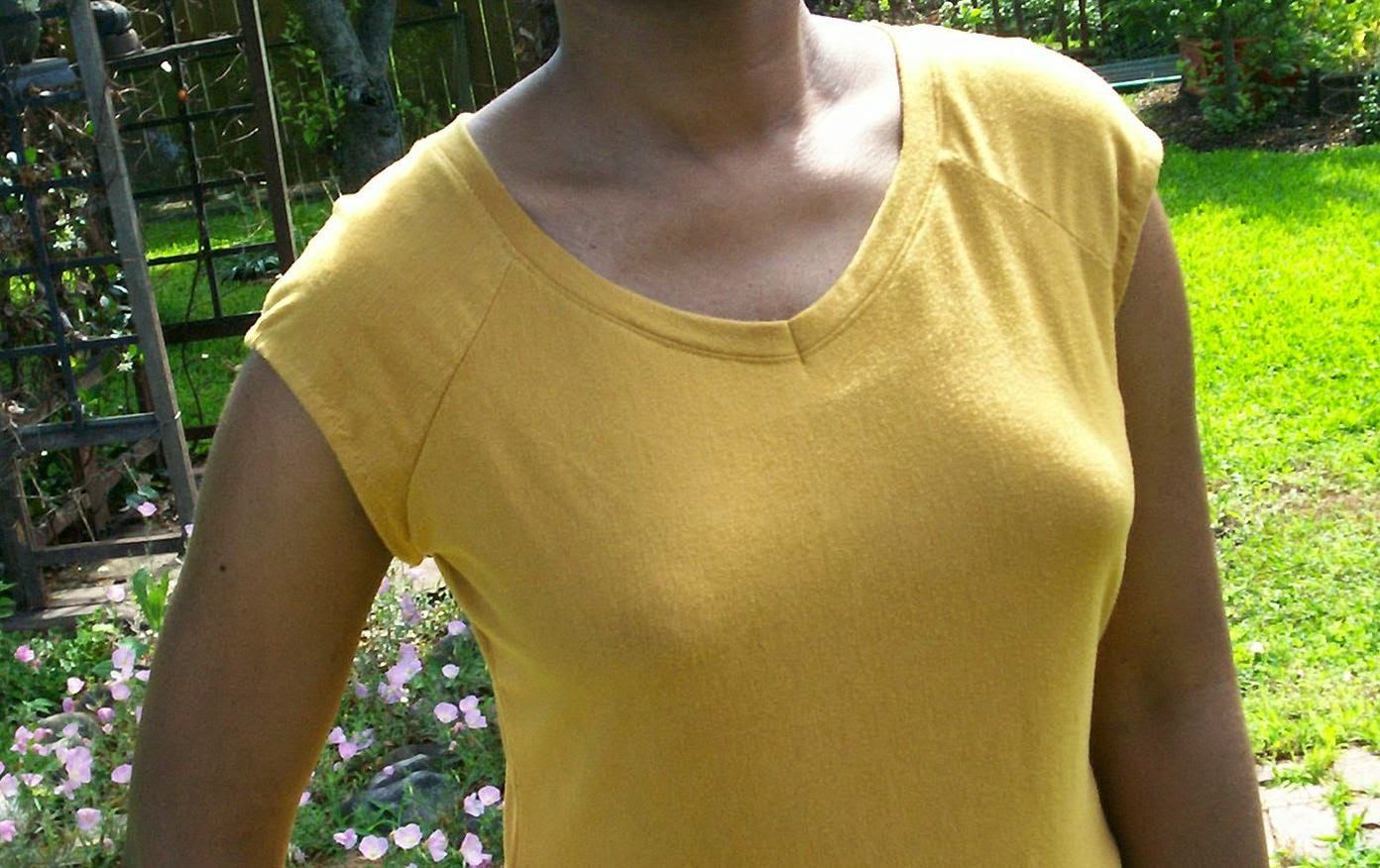