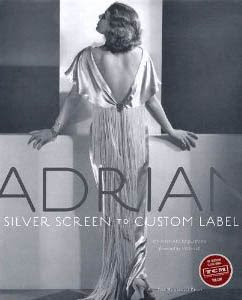 Luckily, my college has a fashion school, which means that the university library has a more than decent collection of books on fashion. They have a paucity of the latest books, but they have older ones (pre-1990) galore.

My favorite of the five is the first book about fashion designers from the years 1900 to 1999. Not only does the book examine the designers known in each decade but it also contains pieces on the general look, cosmetics, and specific fads worn during each. There is even a day-in-the-life of a model in the early 1960s.

I only regret I didn't have access to the Adrian book when writing his profile for my series at Colette, but I can't wait to go back for more books. I've already searched the card catalog online and chosen my wish list. For some reason, all the good ones have been checked out by fashion majors! The nerve! ; )

Some Pretty Pretty For the Weekend 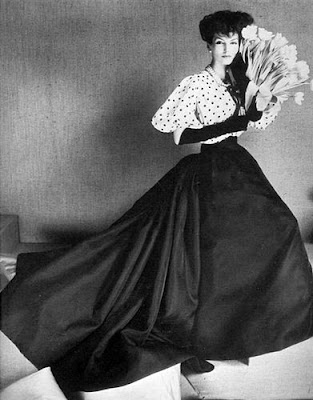 Yup, I'm in the middle of researching and sourcing photos for more fashion designer profiles for Colette Pattern's blog. I'm finally moving on from the 1940s to the 1960s. Wait and see.
Written by lsaspacey at Friday, March 25, 2011 2 comments:


Vera Maxwell is another nearly forgotten designer from the same 1940′s period as McCardell, Cashin, and Hawes. Similar to their ideas, her fashion philosophy involved her designs being both fashionable and functional. According to a 1964 New York Times article, Maxwell’s clothes were described as “handsome, interesting, and eminently wearable”.


Maxwell came to fashion in a unique way because she was a showroom model first. Her individual style and her homemade garments were noticed and then sought out by department stores Lord & Taylor and Best Co. Interestingly, her first real fashion job was with Alder & Alder in 1936,  where Bonnie Cashin had also once worked. She joined Brows, Jacobson & Linde in 1937 to design activewear for sports such as skiing and horseback riding and eventually, in 1947, she went into business for herself under the name of Vera Maxwell Originals.

Besides activewear, during WWII she began designing more utilitarian items like the coveralls she created for female factory workers at the Sperry Gyroscope Corporation. She considered them to be the first jumpsuits for women.


The coveralls were not the only uniform-like garment that Maxwell would design. In fact, she was responsible for the design of many uniforms that were put into use by the military and by the service industry, such as her proposed design for the Lincoln Center docent uniforms.

Her more fashionable designs were similar to these uniforms by the fact that they also had a practical purpose. One of her favored creations was the travel suit. Usually made of comfortable wool jersey, the suit had separate pieces that could be intermixed to make travel packing easier. As she said, “Clothes should be beautiful, adaptable and sound.” She would continue to create variations on the travel suit throughout her career.

Especially designed for traveling, this particular suit consisted of an Irish tweed coat with a large pocket lined in plastic with zippered compartments meant to carry washcloths and a toothbrush. Worn with a coordinating blouse and pants in wool jersey, one would be ready to go straight from the plane after a convenient freshening up.


Her style, innovations, and lasting influence on fashion:

Again, a look I'm really loving...no black or nearly no black color combinations in clothing. As a girl who has been wearing black forever, I really think as I get older I want to bring more color into my wardrobe. I already have it all over my home, so why not? These examples are from APiece Apart.

Update: Today I am wearing a chocolate brown skirt, royal purple turtleneck, mossy green jacket and the only black I'm wearing are my tall boots. Hurrah! 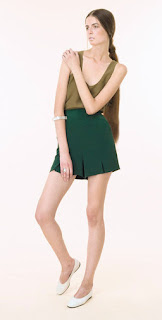 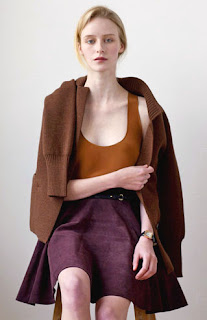 
While many of us may know the name of Claire McCardell, the work of Bonnie Cashin is not as well known to modern lovers of fashion. Yet Cashin was honored with the 2003 Fashion Institute of Technology exhibition, “Bonnie Cashin: Practical Dreamer.” Cashin did not use unnecessary adornment or details, her clothes were fun and luxurious while still being quite practical and comfortable.


Like many female designers, she made clothes that she herself wanted to wear or as she said, “fashion evolved from need.” She designed for women like herself who were smart, active, self-aware and independent.


Cashin introduced the concept of functional layers of clothing into Western fashion. These layers would consist of togas, funnel-necked sweaters, hooded jersey dresses and oversized coats. Her signature Noh coat was an unlined T-shaped coat with deeply cut armholes that could be worn by itself or under a poncho or cape.


She worked for the ready-to-wear firm Adler and Adler for twelve years before freelancing as Bonnie Cashin Designs, Inc. in 1953. In the early 1960s, she was designer of the early Coach bags.


Some of her signature details, such as the leather bound edges and metal toggle closures are still in use today.  Some of the first bags she designed for Coach were known as “Cashin-Carry” bags.

Hollywood Connection: From 1942 until 1948, she was a contracted costume designer for such Twentieth Century-Fox films as Anna and the King of Siam (1946) with Irene Dunne, Cluny Brown (1946) with Jennifer Jones, and Laura with Gene Tierney (1944).

Her style, innovations, and lasting influence on fashion:

The Current Soundtrack To My Life...

has been provided by Florence & the Machine.


Heavy In Your Arms

But at least there was a little treat. A showing of "Cover Girl" with Gene Kelly and Rita Hayworth on regular TV, featuring Eve Arden (looking fabulous!) and gowns by Travis Banton!!

I was still miserable, but the eye candy was appreciated. It could have been an entire afternoon of Real Housewives of New Jersey!
Written by lsaspacey at Wednesday, March 09, 2011 1 comment:


Elizabeth Hawes was born in New Jersey and started sewing as a teenager. In 1932, Dorothy Shaver promoted Elizabeth Hawes and a few other female designers to the media as leading American designers. Like Claire McCardell, her fashion contemporary, Hawes created simple bias-cut comfortable garments with deep armholes and natural shoulders that would be worn with flat-soled shoes. However, while McCardell’s style was somewhat suburban, Hawes was more part of the arty and sophisticated city set. 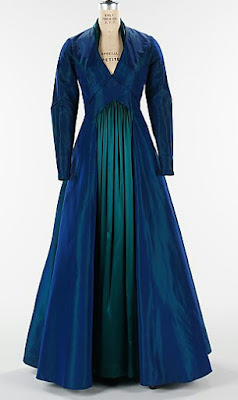 Hawes felt that the body and its clothes must work together. She thought that American women should not accept French fashion as the standard. Her goal was to bring stylish clothing with an American sensibility to the masses and believed that all women deserved to have beautiful and functional clothes. 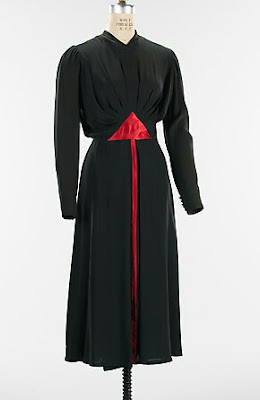 Her career beginnings were suspect; her first job upon arriving in Paris was as a copyist for a high-end French “knock-off” copy house. She worked there for over a year eventually receiving a position in the legitimate fashion industry by apprenticing with Nicole Groult, the sister of designer Paul Poiret.

While still in Paris, she started her own fashion news service for Americans under the pseudonym “Parisite.” She also wrote columns for The New Yorker, Women’s Home Companion and PM magazine.

While considered famous in her time, she was never featured in Vogue or Harpers Bazaar because of her unconventionality which alienated fashion industry leaders. One of the reasons you may not have heard of Hawes is because of her unpopular stance on US mass production. 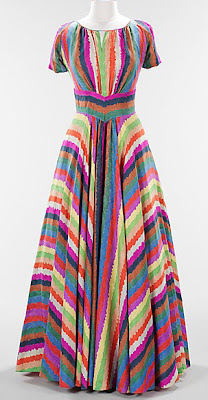 Hawes believed in mass production and believed that the US could learn from the French process. But the purely businesslike approach upset her and she was unwilling to make the compromises needed for American mass production. Despite this, her fashion career lasted fifteen years. After a stint working in an aviation factory during the war, she turned to studying and writing about female factory workers and the conditions they worked under.

Hollywood Connection: None, she opposed the growing idea of Hollywood being considered the capital of American fashion.


Text by Lisa/lsaspacey
Written by lsaspacey at Wednesday, March 09, 2011 1 comment:


Claire McCardell was a well known fashion designer who revolutionized women’s fashion in America. She was the cover subject of an article on the emergence of American fashion in the May 2, 1955 issue of Time magazine.


McCardell was inspired by Vionnet and Chanel when studying in Paris in 1926. She designed clothes for her own lifestyle, much as Chanel did before her. As she was quoted in the Time article, “I’ve always designed things I needed myself. It just turns out that other people need them too.” Many of her pieces were created out of necessity: shivering aboard a yacht she created a wrap in tweed, skiing with cold ears, she designed a wool jersey hood. Most importantly, when hampered with too much luggage on a European trip, she created separates by designing dresses in parts with interchangeable tops and skirts. In addition, the tops could also be worn with pants. Her wardrobe was based on jersey halter neck tops and jersey skirts.


She first worked as a sketch artist for Townley Frocks, left to work for Hattie Carnegie, then returned to Townley for a few years as their head designer and eventually became a partner in the company. 9,831 of her sketches created during this time are now archived in the Fashion Design History Collection at the New School in New York.

Her clothes were functional and simple with clean lines. They were considered subtly sexy with functional decorations. She utilized details from men’s work clothing, such as large pockets, denim fabric, blue-jean topstitching, metal rivets and trouser pleats.


Her style, innovations, and influence on fashion:


Images: The Metropolitan Museum of Art