When swatching fabrics from Mood Fabrics two years ago, I decided to see what all the fuss was about 4-ply silk. I ordered swatches of it, along with some of silk charmeuse and silk crepe de chine in some rich jewel colors. There was a gorgeous emerald green crepe de chine that I really liked but I had no real reason to order any silk. 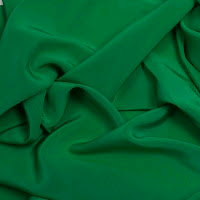 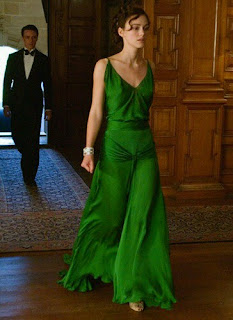 In 2010, I had written about "THAT green dress" worn by Keira Knightley in 2007's Atonement. The dress made of silk satin was designed by Jacqueline Durran and I was fascinated by the story of the construction and the tales of the garments' extreme fragility. When I held that emerald green silk swatch, that dress was the first image that came to mind along with all its 1920s details and influences.

Then in 2015, my niece announced that she was getting married the summer of 2017 and I realized "Well, I AM going to need a party dress!" The only semi or formal gowns I had in reserve were one former bridesmaid dress from 15 years ago (actually wearable and I had hoped for an opportunity to wear it again!) and one black (!) satin affair. The old bridesmaid dress could be worn for the rehearsal dinner because that silk crepe swatch had now become a real dress possibility. 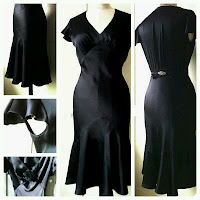 In my pattern stash, I had the two free indie PDF patterns, the Eva dress from Your Style Rocks and the Little Bias Dress by Vera Venus. I assumed at the time that I would use one of them for the dress. However, over the last few months, I've tracked down real life examples of these dresses made up and I've lost my love for them. The Eva dress was dropped first, it is a great design that I hope to still make up but I now want to have my 1920-30s bias silk dress fantasy and that is not the Eva.

I had been pretty convinced the Vera Venus Little Bias Dress (LBD) was "the one" but time has made me question that thought. When I first downloaded the pattern I matched the measurements, but not now, which means alteration would be necessary.

Well, time has sped along and that wedding is now only five months away. I need to choose a pattern that will result in a flowing, figure-enhancing, 1920-30s styled dress and is fairly simple to make for my first time sewing with silk. 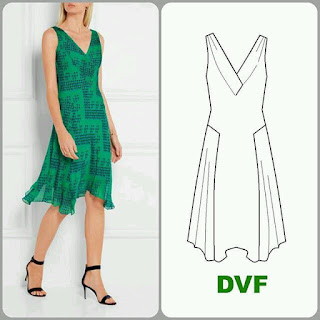 On Instagram, @sewandstyle_ posted a Diane von Furstenburg "Dita" dress and a sketch of it's construction. I was struck at how familiar that dressed looked and remembered a New Look pattern that was constructed very similarly. See? The skirt panels are attached the exact same way! 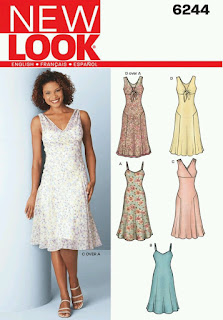 So right now, this is the dress to beat! Yes, the 1930's influence isn't really there but I can't stop thinking of this dress now. The skirt for New Look 6244 seems fuller than the Dita (about 110" in width) so a muslin must be created time and the asymmetrical hemline will need to be drafted, which I think will help add the vintage element. In addition, the hemming of that hemline will be another hurdle to jump.

But look at these gorgeous examples of the Dita dress. Oh, how I would love to end up with something like this! 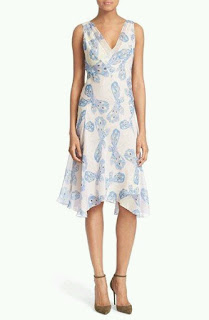 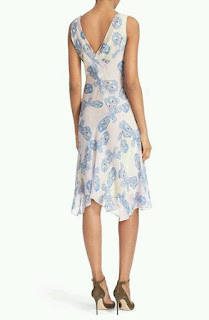 So no doubt about it, I will need to perfect a muslin in order to replicate the Dita using this pattern, because of the difference in the skirts' fullness and hemline.


Part of me wants to try the dress first in a polyester crepe de chine. However, the final dress must be in silk, a fabric I have never sewn; therefore, I need to know how the fabric behaves when cutting it out, sewing it on my tempestuous machine, and when adding closures or hemming by hand.

I need to practice sewing silk on a simpler project like a bias camisole or drapey top for practice and to also make a polyester trial of the dress. So, yes I have a lot of sewing to do before the tenth of June!
Written by lsaspacey at Wednesday, February 08, 2017 7 comments: