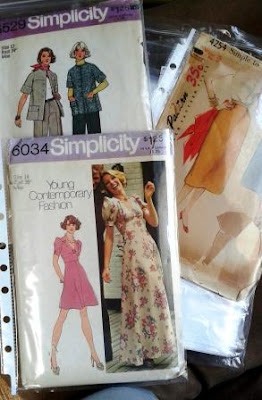 My Etsy shop, Metamorphpursuit has reopened!! Right now there are over 30 patterns there, more will be added over the next two weeks. I have Vogue designer patterns from the 1980-90s, vintage Advance and Simplicity patterns from the 50-60s, and various others. Go check them out using that new widget to the right! 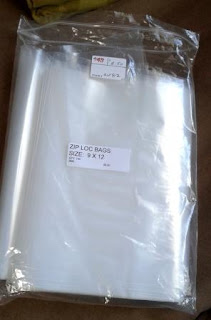 Buying that small group of patterns at Hancock Fabrics; no matter how cheap they were, still made me feel guilty for all the others I own and haven't used. This inspired me to finally finish a project I started two months ago when I came across a vintage store that had a booth devoted to thrift and antique fair supplies; vinyl bags, stickers, tags, and display stands. I bought myself some 9" x 12" plastic zip bags* after I saw how they packed their own vintage patterns. Instead of getting a bag that just fits the average sized patterns they used much larger bags and placed the pattern perpendicularly in the middle and wrapped the ends to the back and used archival tape to anchor the two sides together. I took a day and wrapped most of my patterns, including all the vintage ones, the oldest, my T-N-T (most used), and the ones I finally decided to sell.

I made sure to use the new bags and my original 6 x 9 plastic protectors to make sure that all the vintage patterns have some kind of coverage. Unfortunately, without protection, some of my older pattern envelopes have become crispy, as you can see above. In those cases, I have carefully removed the folded instructions and pattern and placed them in the bags individually so that future damage to the envelopes will be minimal.

This protect and purge session ended up freeing 70+ patterns that I realized I'm either never going to make because of the style or a size I will never fit into again and the idea of reopening up my Etsy store was definitely the way to go.

To make those elimination decisions, I used this ranked order of criteria:

For years, I've kept a photo inventory of the staggering amount of patterns I owned on Flickr. There will always be a few that I keep for sentimental reasons, but once I moved the ones chosen for sale to a separate album my inventory numbers changed drastically:

So from a quantity of nearly 200 patterns I now have a much more usable group of 106.

Of course that still doesn't include the 20 or so downloaded PDF patterns I may also own. But, baby steps, baby steps...

* For archival purposes, make sure they are 2 mil uncoated polyethylene bags.
Written by lsaspacey at Monday, July 25, 2016 1 comment: 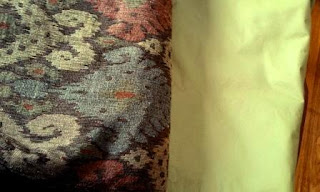 A few week ago, I visited another retailer going out of business, Hancock Fabrics. I'll truly miss this store. Though fairly similar to Jo-Ann Fabrics the quality and variety of their fabrics had been steadily improving and I found myself finding more interesting options there as Jo-Ann became more and more focused on their Prom/Cosplay and craft supply departments. Also most of the good Jo-Ann fabric, like the recent Nicole Miller collection, doesn't seem to make it to my local stores and is only available on the website.

However, Hancock's sale came at a great time for me because I'd been tasked by my Dad to cover our "coffee table," actually an unusually large hexagonal ottoman with a radius of 62 inches. It is currently covered in a scorched coppery brown vinyl. The goal was to construct a removable fitted cover and the sales were so good on upholstery and drapery fabric that I bought enough for two covers plus some extra for coordinating couch pillows. The first cover will be in a chartreuse green vinyl, originally priced at $29.99 per yard which at 90% off became $3; therefore, I bought three yards for only $9! The fabric for the second cover is a gorgeous muted green textile that was 70% off of $9.00. So for only $2.70 per yard I bought four yards of fabric for a total of only $11!

In addition, as a bonus, my Dad let me throw in a bolt of winter white ponteroma knit also severely discounted at 80% off. I got a bolt with 3 3/4 yards remaining on it for $3 a yard and I am envisioning some white tops for the fall. I don't have enough white tops to coordinate with my skirts and pants especially since some colors didn't quite work with the mass of striped knits that I made. I just wish I'd made to the store a week or so earlier to pick up some black or brown ponte but I'm sure those were the first to go. Half the store's fixtures were empty and for sale! 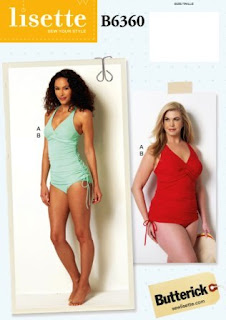 While there I also scooped up some patterns, now that they were finally on sale too. I picked up McCall's 7381, New Look 6244, Butterick 6221, Butterick 6178, and Butterick 6031. Amazingly, Butterick 6360 was also included. This is the first swimsuit pattern I have ever bought! Who knows when it will be made though because I have no need of one at the moment. But I couldn't pass it up (just a $1!) because it's similar to the Closet Case Bombshell and I feel more comfortable with Big 4 instructions.
Written by lsaspacey at Tuesday, July 19, 2016 No comments:

A Public Service Announcement Re: Sergers

Reading "I can't wait to get a serger so that I can start sewing knits!"

I read this over and over in the comments of sewing blogs. Where has this idea come from, that you must have a serger before you can even attempt to sew knit garments?

Reality: You Do Not NEED A Serger

The truth is people have been sewing up knit garments on standard sewing machines for years with no problems. Even though the overlock (the stitch that a serger produces) was invented in 1881 and the machines that primarily use it have been in existence for over a century, their use was predominately industrial for decades. Nowadays, knits can be made up well using either a simple zig-zag stitch (my personal favorite), the simple overlock or stretch stitch available on the majority of sewing machines, or a dedicated stand-a-lone serger.

In my opinion, there is only two reasons to use an overlocker to sew knits: 1) If your desire is for the insides of your garments to have a finish like the insides of RTW garments. 2) You desire a way to construct knit garments fast and in bulk. I understand that desire but just not enough to make me pay for a separate special machine that can range in price from $200 to several thousand dollars. So, I want it made clear especially to those just beginning to sew or striving to sew on a budget that they can start sewing knits NOW without making that particular financial investment and still be extremely happy with their makes.

I use a practically vintage 1993 Babylock Companion BL2100 sewing machine (I would like to upgrade eventually) and I am incredibly proud of my knit makes. It took some education since I started sewing 20+ years ago but since having learned 1) not to let any part of my knit fabric hang off any surfaces and to 2) help feed the fabric through instead of pulling it, my hems have been just as uniform and flat as any of my woven hems. In other words, it can be done.

After a while, if you still want an overlocker, then by all means do your research and find the one right for your purposes and wallet. Just don't feel that the lack of one should hold you back. Thanks for listening and keep on sewing!
Written by lsaspacey at Saturday, July 09, 2016 3 comments:

Further Adventures In Travel And Retail...

A week after my North Carolina trip, I took a week long trip down to Florida with my dad to see my sister's beach cabin in Ormond Beach. She's been spending week-long vacations rehabbing the house for when she and her boyfriend eventually move down there for good. Before the trip, I realized I didn't really have clothing for the trip, my summer stuff from before no longer fit so I had to supplement what I did have with a pair of sandals and some linen drawstring pants from Target for the trip. 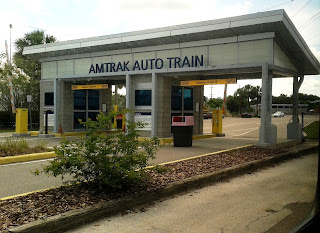 I've been to Florida once before but I flew to Miami then, this time we would be traveling by Amtrak Auto Train, a seventeen-hour ride so that we could also transport the car and avoid the 900 miles of driving. But still, seventeen hours is not easy, especially when you have to sleep in your seat and even though the seats are similar to a recliner with a raised foot bed, the backs only recline about 25%.

What can I say, but it wasn't until the last day of the trip that I actually bought anything. First, we stopped at a Sports Authority since they were going out of business. My dad stocked up on fleece lounge wear and I purchased a unique fleece top from Capezio with a cowl large enough to be worn as a hood and front side tucks that double for shallow pockets much like the tucks on the StyleArc Daphne Duo top. 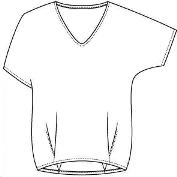 Later, I was able to get my family to visit the St. Augustine Premium Outlets because my sister wanted to go to the Clarks outlet too and I was able to buy a pair of Brynn Ivy pumps. However, the family became quickly bored so we left to check out my second suggestion, the Daytona Flea Market. Now, it seems I was sadly mistaken on what a flea is. I was expecting something akin to the Antique Fleas I've attended in Northern Virginia. Instead, this was full of items like, novelty t-shirts, used romance and thriller paperbacks, discount or hot electronics, purses, backpacks, tattoo artists, and pretty much anything else you would find available on late night infomercials. 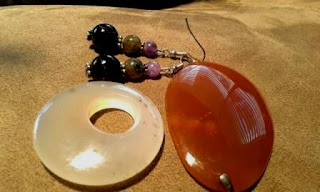 As we were about the leave, I stumbled upon a booth selling loose gems, jewelry findings and some finished jewelry items for amazingly cheap prices, like $5 each for the pieces pictured. I ended up purchasing three items, a pair of earrings composed of  amethyst, labradorite, and black tourmaline; a carnelian teardrop pendant, and a polished disc of Brazilian agate, the last two are to be made into necklaces. I found a YouTube tutorial for creating an adjustable necklace by using a slide-knot  mechanism. I can use that or mount the necklace in a more traditional way like this example: 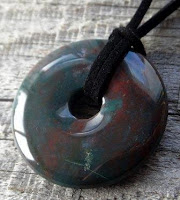 After this, the next project is pants.
Written by lsaspacey at Sunday, July 03, 2016 No comments: