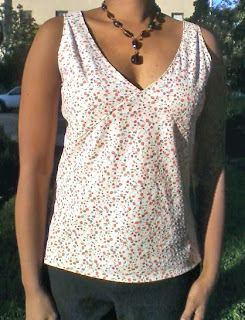 Pattern Description: Two bias pullover tops: 1) fitted, v-neck with bodice seaming, side slits and 2) loose-fitting, scoop neck with back extension to upper front (to be worn over first top).

Did they look like the photo/drawing on the pattern envelope once you were done sewing? Yes

What did you particularly like or dislike about the pattern? It was very easy to put together, though I ended up making it more involved by underling the fabric and using French seams throughout. I liked that the visible seaming on the front of each top was topstitched.

Fabric Used: 1) Multi-colored (orange, gray, white, tan, ruby red on an off-white ground) Prairie Rose Swiss dot fabric from Joann, $4.85. I bought the very last bit, actually less than the 1-1/4 yards needed according to the pattern. 2) 1-1/8 yards of Daphne batiste in papyrus, $12.48 for the overblouse and enough left over to completely underline top 1. 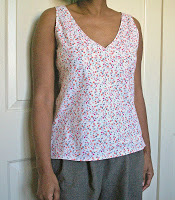 Pattern Alterations or any design changes you made:

Top 1: Originally this top was going to be one layer, but luckily I had purchased enough of the coordinating batiste that I could underline all four pieces. This Vogue Elements top is a simpler variation of a Marc Jacob pattern, Vogue 2068, that was released the very same year. I made a version of that top years ago. The necklines are different and the Jacobs pattern used French seams throughout. I wanted that same quality so I incorporated the French seam construction for this top too. 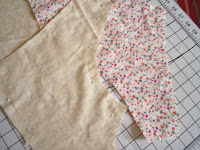 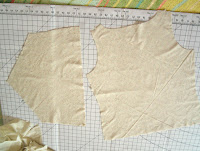 It is hard to see but the pieces are basted using intersecting diagonal lines.

Since I was going to use French seams I thought I should also use the correct method of underlining according to the Reader's Digest Complete Guide to Sewing. This method has you reposition the underlining because that layer should be slightly smaller that the outer layer to reduce bulk.The technique involves hand basting and the spine of a thick magazine, pretty cool! 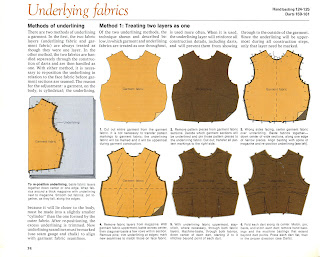 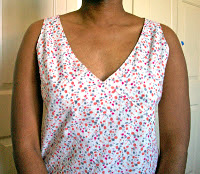 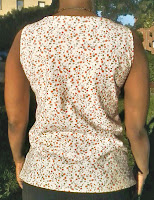 Once that was done, the rest was easy, I just followed the seaming instructions from the earlier pattern. Once I made the first French seam at the shoulders I decided to baste the rest of the top together and see what I had. The V-neck was really too low; you can see that in the drawing but I thought that was an exaggeration.  I ended up taking that seam out and taking one inch off both the front and back pieces. This not only brought the neckline and armholes up but also put the waist curve of the pattern where it should be, at my actual waist. There was also an issue of a bit too much length in the front armscye, so instead of cutting out a replacement front I added an ease line and lightly eased/gathered some of the length out. 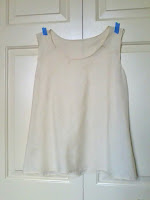 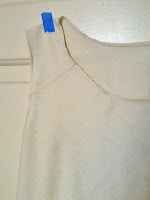 Top 2: There couldn't be an easier pattern or instructions. Again, I incorporated French seams to match the other top which will be worn under this one. Despite using the instructions from Vogue 2068 I decided to start with a 3/8" seam first and then 1/4", the reverse of what they indicated. This top assembled quickly with tiny 1/4" hems and seams all-around. The batiste ended up being a really nice fabric, in look, feel, and weight.

Would you sew it again? Would you recommend it to others? Perhaps. I did end up making alterations to the garment during construction until I was satisfied and unfortunately, I did not transfer those changes to the pattern pieces before completion. I would highly recommend this pattern if you can find it online.


Conclusion: I love how both of these tops came out with a flattering fit and clean interior finish. However, at least from the way that I made them, the second top does not really work as an overblouse to the first one. It is too bulky. However, it works as a perfect complement over the original Marc Jacobs top, which it matches in color. So, win-win.
Written by lsaspacey at Monday, October 22, 2012