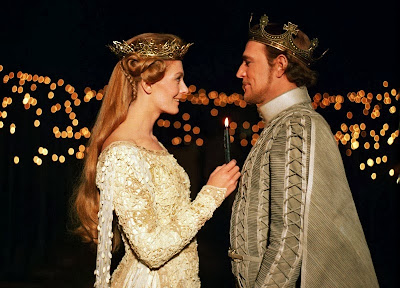 This also just happens to be one of my favorite movie musicals, along with The Music Man, Funny Face, Sound of Music, Company, West Side Story, and Sweeney Todd**. The embedded video towards the bottom of the post is a medley of all the songs from Camelot. Enjoy! 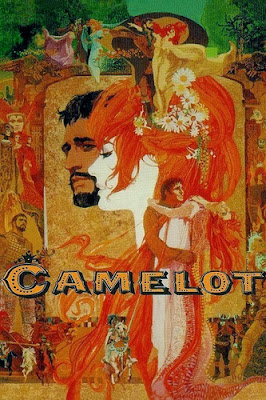 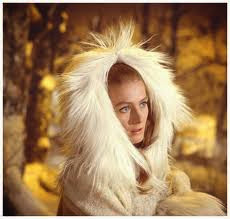 Vanessa Redgrave, at her most beautiful, is first seen dressed in white arriving for her first winter in Camelot. Hooded in white fur, bundled in blankets, and wearing white gloves she is delivered to her husband-to-be in a horse drawn carriage. From this image, you can see that the costume design in this film will not be boring.

The majority of the costumes of note in this movie are worn by her character, Guinevere. A variety can be seen in the Take Me to the Fair number seen here.

Designer John Truscott’s costumes for Guinevere ran the gamut from a mustard cowl neck gown to a plain smock with a mesh-like vest (see below) to gleaming gold and burgundy red gowns. The design of the regular day gowns were perfect, as they not only evoked the medieval period of the play but also reflected the contemporary fashions of the late 1960s. The long loose hair, daisy crowns, and long A-line gowns could have been seen on the streets at that time. 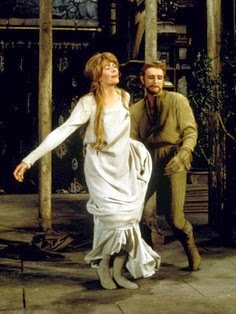 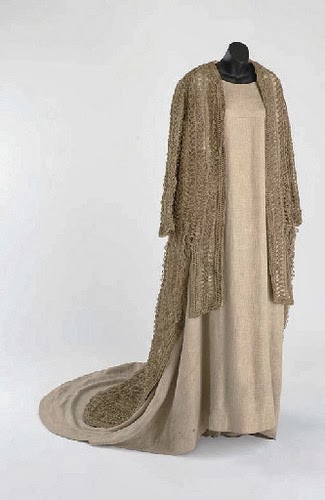 The headpieces, hats, and hairstyles were highly imaginative and some of the braided styles are amazing. The film displayed Vanessa as a great beauty, important to the plot as this Guinevere is loved/or admired by all of the male knights and Arthur, her king. 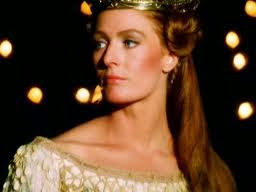 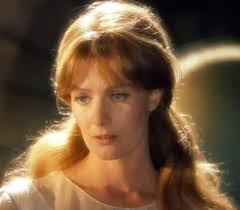 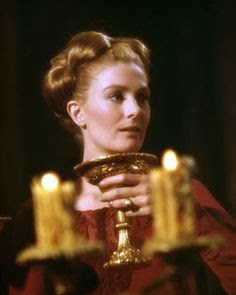 Moving onto the true reason for this post: my up close and personal view (at the VMFA Hollywood Costume exhibit) of one of my favorite cinematic gowns, the unique wedding gown of Queen Guinevere. 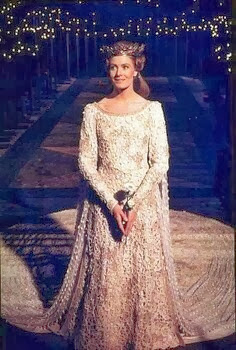 The exquisite wedding gown arrives in the movie, lit by candlelight, shimmering out of the darkness. It is designed with a bateau neckline, long sleeves, in an a-line shape with an attached cape that flows over the shoulders and arms and then drops into a large circular train. The overdress is composed of a gown crocheted from fine wool to resemble airy spider webs that had tiny shells sewed into the center of each one. It is open at the side for easy removal and tied with cords.


Underneath is a shimmery kirtle (or cote-hardie) made of something resembling distressed velvet. The third and most dramatic element of the dress, the train, is made from fine mesh embroidered with another loose cobweb design in silver. Along this design, the fabric is embellished with bleached pumpkin seeds tied and hanging every few inches from the design, much like one would expect pearls on a couture gown. 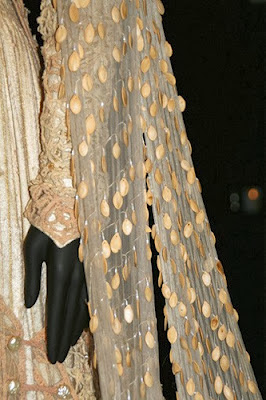 The outfit is breathtakingly beautiful in person. Luckily, this dress is seen in motion in the clip below (it appears at 3:50); however, we do not have the experience of hearing the unique sounds of the seeds as it moves.

More images of the wedding dress can be found at the Fashion Media Arts Council and its own Hollywood Costume review. 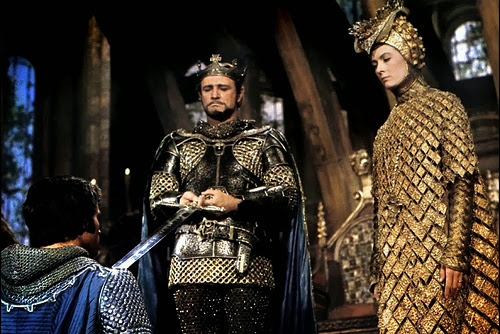 An outfit that seems to fit more with the 1981 Arthurian tale, Excalibur, is this gold reptilian-like costume, complete with a lizard-like headpiece. This outfit would have perfectly suited Helen Mirren's Morgana/Morgan le Faye character in the later film much more than the Redgrave earth mother/flower child-influenced Guinevere in 1967. 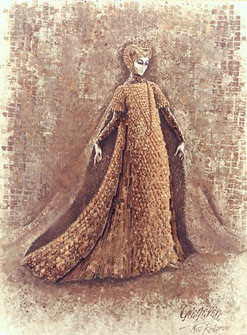 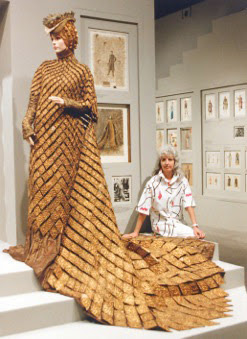 From sketch to studio costume to film.


An exquisite design constructed of diamond shapes combined to make a monumental armored gown of interlocking diamonds of copper or bronze. The short-sleeved overdress and cape are hinged like chain mail over a long-sleeved gold patterned high-necked gown. It was then topped with a horned lizard-like hood and crown. 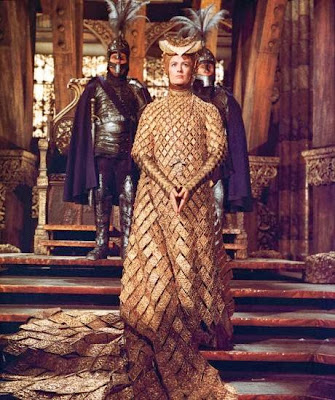 Surprisingly, I also found the male costumes, particularly the armor, beautiful. The details as seen in these few photos show an attention to detail so amazing its upsetting to know that it barely was noticed on film. I love the basket weave-like chain mail of the tunic worn under King Arthur’s breastplate and the difference in weight and look of the kind used in the chain mail gorget (cowl) arranged around his neck for protection. 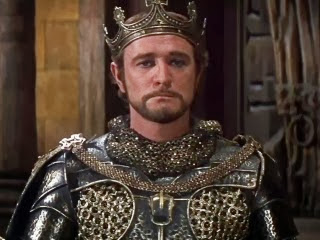 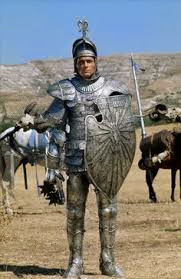 Here is a costume the knight Lancelot Du Lac wore during his boastful song C’est Moi. The shirt is constructed of silk with a smocked waistband and cuffs, both embellished with violet embroidery on the cuffs, waistband, and neckline.﻿ 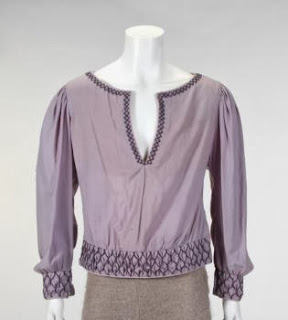 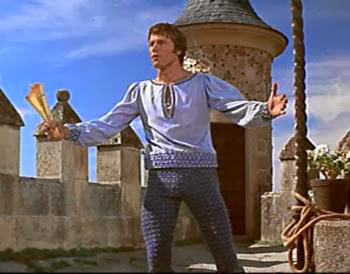 I must confess that the purpose of this post was to document only the wedding dress. However, looking at the film again, I realized the whole production impressed me. This should be no mystery since John Truscott; the costume designer was also the production designer for the film. Unfortunately, Mr. Truscott only designed one other major motion picture because he was considered too extravagant and expensive. However, look at the results!

*John Truscott won Best Costume Design that year for this film.
** The last three all with lyrics by Stephen Sondheim!

What a lovely treat! Thanks for this.

Wow, you're right, there's some incredible costuming! Perhaps I should give the film another go - got bored the last time I tried to watch it, silly teenager at the time! *lol*
Oh, and thank you so much for the comment on my blog - very kind of you! :)

I've never seen this one, but now it is definitely on my viewing list. Love those costumes!

Where can you find the gold lizard dress with the crazy hat???