One of many pre-blog makes: 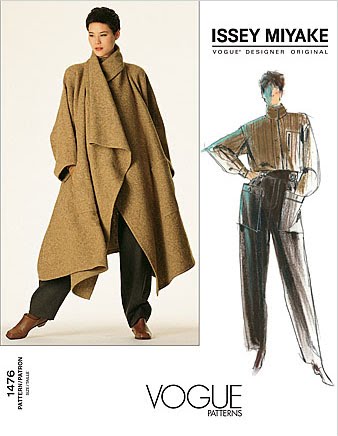 I just noticed that the Issey Miyake Vogue 1476 pattern is now in the clearance section for $5. This pattern has been in the Vogue Pattern book for over twenty years! I made it in either my junior or senior year of college, so even though the pattern is undated that makes it at least late 1980's when it came out. The news of its imminent OOP* status finally got me off of my butt and I've finally taken some pictures of the coat I made over twenty years ago. The truth is this thing will last me forever because it's only been worn out of the house about 5 times total in those 20+ years. I still adore it and when I have more events to go to then it will go with me. Something like this is so unusual that I don't think of it as something that can go out of style. 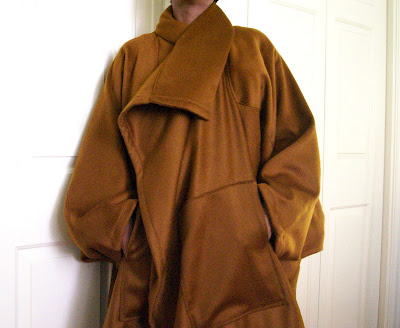 I cut this lustrous, bronzy, milk chocolaty brown wool out on the family living room rug. It took up so much room and the pattern pieces were huge. I was so excited about it that I even bought expensive Gutermann thread for it. In fact, I still have the spool. Despite its looks, the coat was actually a fairly simple sew, the difficulty was in working with such a large amount of heavy fabric on your lap! 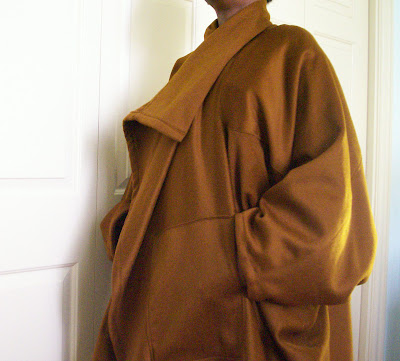 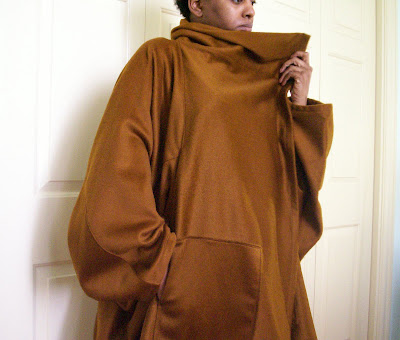 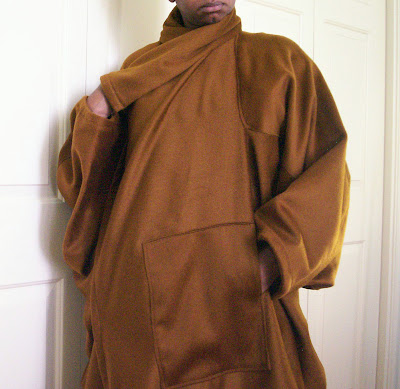 So if you've ever been intrigued by this pattern, get it now for only $5 because once it is officially out of print and gets on the vintage pattern market it won't be going for that cheap! 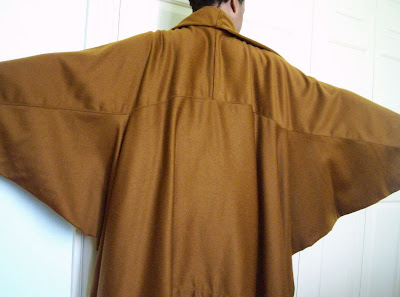 I've never seen it made up. It is gorgeous!

It was already a classic in the late 80s when I made it (I think it was out by 83). I got 5 yards of black wool/mohair, in July, from my pal in New Haven who pulled me to the back room and pssss'ed me to it for cheap. There were only a couple pieces left after I cut, and those made the pockets, so it's good to pick not too heavy fabric :-). I bound the edges in Ultrasuede, something which caused much swearing.

I still love it. I wear it every winter, when it snows there's nothing better. My neighbors here laughed at me the first time they saw it, but now they envy me. It's kept me warm in blizzards in NY. I kind of want to be buried in it..

And the shirt is wonderful. If you cut the back properly, with the grain running down the middle of the pieces, it flows like butter. It's still my best-fabric shirt, the one for the precious Japanese silks and such.

So funny - I actually saw this pattern yesterday @ my local store for $1.99!! It's beautiful! and your version is divine.

I've made Issey Miyake Vogue patterns before and his pattern pieces are HUGE like you said. lots of fun though :)

Do you have pictures of your pieces? I could only find one other coat made up online. I'll be adding my pictures to the Vintage Pattern Wiki entry for this pattern so others can see it made up too.

That is a really cool coat. Don't wait for a special occasion!

Oh, man, this is one of my all-time favorite patterns. I'll bet I made those pants 7 or 8 times. I LOVED THEM. I would still make another pair. The pockets are divine. I have never made the coat, but wisely kept the pattern pieces. I made the shirt a couple of times, too. I love your coat! I've never seen it made up in real life before. Fantastic!

I just took mine out of mothballs this week. Mine's teal, and I love it madly, even though it's difficult to go anywhere in it; it's so full that I can hardly squeeze behind the wheel of my compact car. Yours is absolutely beautiful, and I'm so glad you posted it!

Noile,
I would love it if I could see your coat too! Please take pictures!

Guys, any ideas...I don't understand how to construct this coat

Sabah, don't worry about the logic not being evident. Issey Miyake patterns are like that. It's part of the fun. Just follow the directions and watch as it turns into the garment shown on the envelope.

It's a great pattern. I love the shirt too. I still have one made in heavy raw silk in the 80's and made the latest in Liberty Pamela Judith last year. Everyone loves them.

This is my goto pattern for shirts. It's the one I make whenever I get my hands on a large piece of good fabric. It looks great in drapey fabric but also makes a real statement in a crisp fabric. I've only made the coat once. Loved it but didn't wear it much. The comments make me want to make it again.