I finished another project! Even though it was not on either my fall 2010 OR summer 2011 sewing plans! However, I had to make it, it was so easy.

I made another Sorbetto. This time I used a yellow gingham pillowcase from the Ruth Harvey fabric collection*. Positioning the pattern so that the open end of the pillowcase would become the prefinished hems made the project even simpler. I trimmed it using commercial bias binding (in Lemon Ice). However, I reversed the Colette instructions and sewed the right side of the binding to the right side of the fabric, resulting in a clean finish on the front and then hand sewed the binding to the seam allowance on the inside. I also eliminated the final topstitching step.

Before the end of the week I should have another project done too! The pair of heathered brown shorts in the summer plan. Hopefully, the weather; which is damp and rainy lately, will perk up so I can wear them before it's too cold. 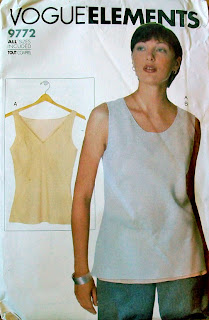 I also purchased this pattern, Vogue 9772, from their great 1990's VogueElements line (I own five others and love them all) to use for the Swiss dot I already bought. Perhaps the V-neck version in the batiste and the top layer in the Swiss dot or vice-versa.

* I realize I haven't talked about this fabric I received. I only discussed the patterns and the sewing machine my friend M was selling. So, look for a post on the fabric when I can get some decent photographs of the stash.

You are so clever! Post a picture of it!