More On My Moss Muslin - Part 2

Yup, my Grainline Moss is still not done.


Above is what I started with, so my first step was to add some darts to the back for shaping.﻿ My first darts were only in the yoke and waistband as a test.
﻿
﻿ ﻿﻿ 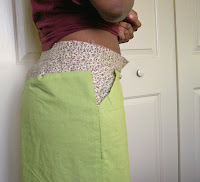 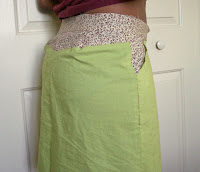 Notice the extreme bump-out out at the skirt portion. It was because I didn't extend the dart into the skirt portion. However, it did show that my thinking was going in the right direction. Seeking help, I emailed the designer Jen Beeman and according to her I had two choices: 1) alter the waist/yoke only and make a visible dart in the skirt or 2) alter the yoke pattern and adjust the skirt pieces by removing half the intended dart's width from each side in order to eliminate the need for a dart. I chose 2 for a dart-free skirt.

﻿
﻿
I extended the dart about an inch or less down into the skirt. If the end point is perfectly placed it works. I outlined the dart with colored pencil while it was still sewn together, unpicked the entire back portion separating the three elements, and then traced the dart lines on each piece. I also traced these dart markings onto the pattern pieces, cut them along the dart legs and taped them back together. Using a piece of tracing/artist paper along with my design ruler I softened the angles. I will make another muslin (just to be sure) instead of cutting into my fashion fabric.

In addition, to the dart changes above I added a little more curve to the vertical back seam and added some width to the hip area at my widest point to address the "protruding thigh" issue. These changes seemed to have worked until I returned after the holidays and found the skirt was a bit too big now. (Yes, it could only happen to me!) I also believe the angles on my new pattern pieces were too sharp. So, I refined the yoke pattern piece and tried again. However, as the second photo below shows there is still a little puffiness where the yoke meets the waistband, so I think the waistband curve may be too extreme. So I will try again with even more refined pattern pieces.
﻿
﻿
﻿ ﻿ ﻿
Note: ﻿I may have seen a solution to my waistband problem, or at least half of it. Adrienne of Stitching on the Edge chose to fully construct her front and back skirts separately, including the waistband. This means that I only have to perfect the curve on that one section that needs to curve and not the front waistband section.


Messing With My Moss Muslin Part 1
Written by lsaspacey at Monday, February 18, 2013

Thanks for sharing the drawing of your pattern alterations the visualisation is very handy - as is the after photo of your new pattern pieces :)

Well, your perseverance is paying off, I think. The fit really looks good from the back. As for the looser front - is it possible that it sits higher on your waist now after your other adjustments? When I think of the slightly angled shape to this skirt (gets wider as it goes down) it seems that by pulling it higher you are giving yourself a little more room across the hips, which would make it looser. I noticed when my waistband was too big, it sat lower and pulled across my hips.