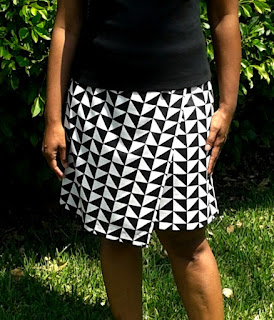 Did it look like the photo/drawing on the pattern envelope once you were done sewing it? Most definitely.

What did you particularly like or dislike about the pattern? I always love a simple knit pattern. The front drape gives it some interest and the near-flat pull-on waistband makes it sleek and easy to wear.

Pattern Alterations or any design changes you made: I cut out a size 18 and the finished measurements stated the hip would be 43" which is an inch larger than my hips. That would be fine but it felt much looser than that and more importantly, it was too wide to attach evenly to the shorter waistband. Perhaps, it wouldn't be a problem with a stretchier knit, but this ponte could only go so far. Therefore, the waistband could barely get over my hips, so I reduced the seam allowance to 1/2" on the waistband. I then increased the side seam allowances of the skirt to 1 inch. Luckily, meeting halfway worked out and with a bit of stretching I was able to make the two match. 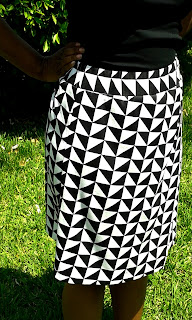 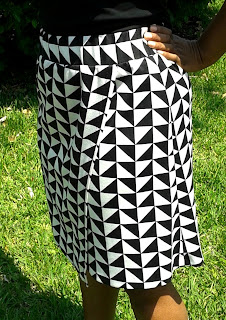 Once I had the elastic in the waistband, I tried on the skirt and could see that it was more a-line than I expected. That was my fault because it is illustrated in the drawing above. I debated slimming it down but decided against it. 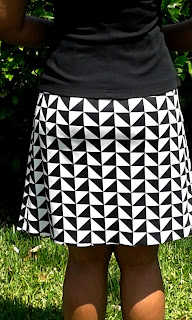 Would you sew it again? Would you recommend it to others? Yes, it is a very simple pattern that produces a great skirt with interest.

Conclusion: I love the waistband, which practically lays flat on me. It would be flatter on someone that has a smaller difference between their waist and hip numbers. I also like that the a-line shape adds a little swing to the skirt which makes it pretty sassy.
Written by lsaspacey at Monday, May 09, 2016

Oh I love this!!! This is the exact style I drew up on some plans I've made. I must have a look at this pattern.
I love that fabric too.

Oh, I love this!!!! The print is perfect for this asymmetrical shape. Bravo!