The ruffles have a reason

However, there must be a reason I keep seeing pink ruffled dresses everywhere...and loving them!

First there was this confection on my fave, Thandie Newton. 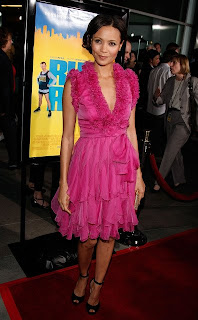 Now, this was a pink I could live with and it was just dreamy.

Then there was this, as part of the J.Crew wedding collection. I loved it and thought it would make a much better wedding dress than the one it was pictured with. 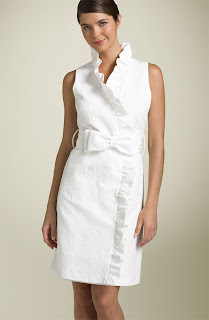 Later, I found and sent this Eliza J dress to EmilyStyle as a suggestion for her wedding reception dress. 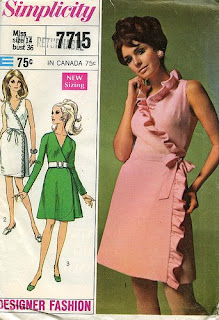 Some time later I found this gem of a pattern on Woof Nanny's Flickr stream of vintage patterns! At first I didn't notice the similarities. Not until I left a comment for the picture saying how it would make a great modern wedding dress. And that was when I had my AHA! moment... 'I had thought this before.'

Now, of course, it's really just the last two dresses that look alike but to me they are all a departure from what I would normally gravitate to. So I think it was all a needed progression so I could fall in love with this last one.

Which, come on, wouldn't mean the same to me if it was a modern pattern. Of course, it had to be vintage, right?
Written by lsaspacey at Thursday, January 22, 2009

I bought Simplicity 2724 almost solely because of the pink ruffled shirtdress on the pattern envelope! It's really cute. http://www.simplicity.com/dv1_v4.cfm?design=2724

Stephanie said...
This comment has been removed by the author.
8:59 AM

I'm seeing a ruffled shirt dress in my future! Or at least, I hope so. I love that vintage pattern.

I see what you mean. I especially like the first two -- very pretty.